Celebrating the classics was an underlying theme recently at Cars&Coffee / Irvine. This fact became quite obvious as I pulled into Porsche row just behind the Type 964 / C4 Pikes Peak rally car seen below. Driving and navigation duties were carried out by two young women, who just happened to be the daughters of the owner. With a deft hand, the 964 was backed into its space, parked beside their father’s 1953 Porsche 356A coupe.

“If two lights are good, then four should be even better”. 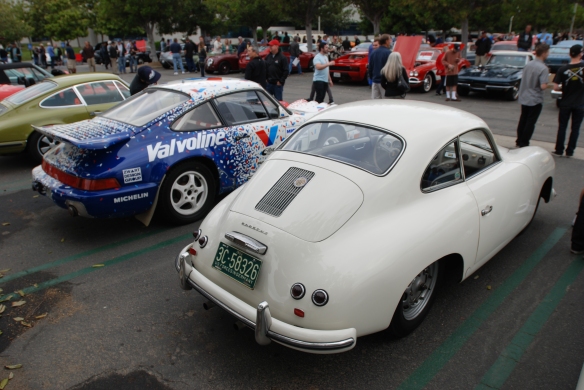 Continuing with the classics theme, was a 1960s vintage race car, making its presence known by the quickly gathering crowd as witnessed in the “featured parking lot”.

An unmistakable classic, making only its second Saturday morning appearance at cars&coffee… 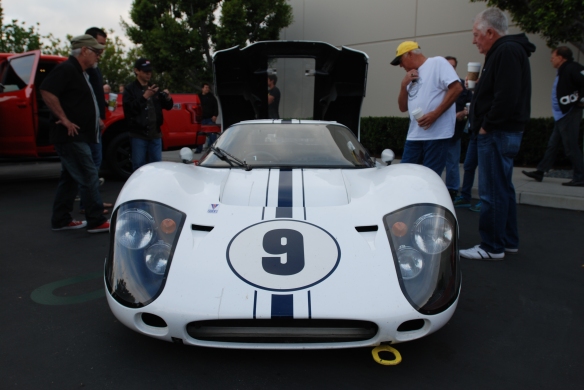 For anyone growing up during the 1960’s and who followed auto racing, it was obvious as to the identity of this low slung, white race car with black striping. Hard to mistake this race car for anything but the iconic, American built factory backed race car that it is; a 1967 Ford GT MK IV. 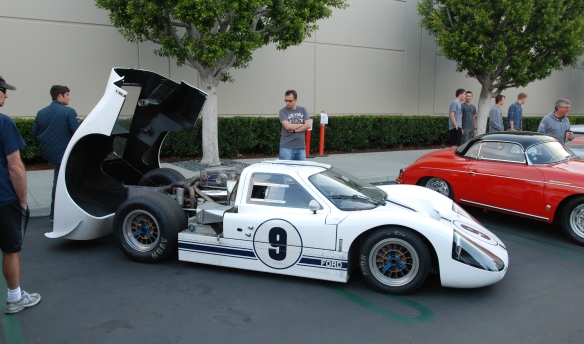 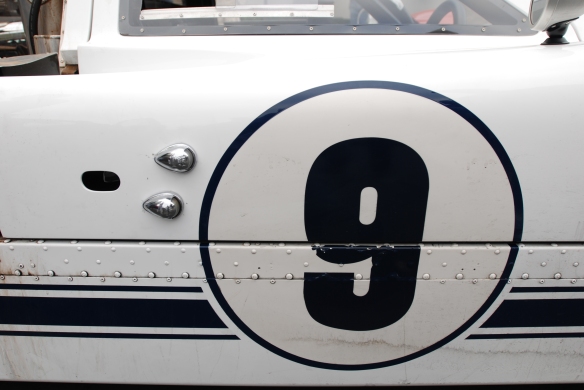 A peek inside the closed cockpit…

and out back, a close up view of another classic component; the premier Ford race motor of the 1960’s, the mighty 427. And as seen on this car, a motor with its dual carburetors housed within a clear polycarbonate chamber, allowing the motor to be force-fed fresh air by dual NACA air ducts, each located on the rear deck, atop the rear fenders. 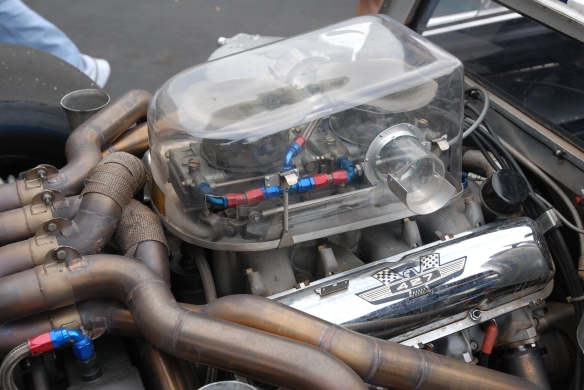 Visible through its rear window (below); the single, treaded “spare tire” and immediately to its right, the fabricated aluminum “luggage box”. A requirement mandated for all competitors in the Prototype Endurance class, per F.I.A. competition regulations that remained in effect into the 1970’s. 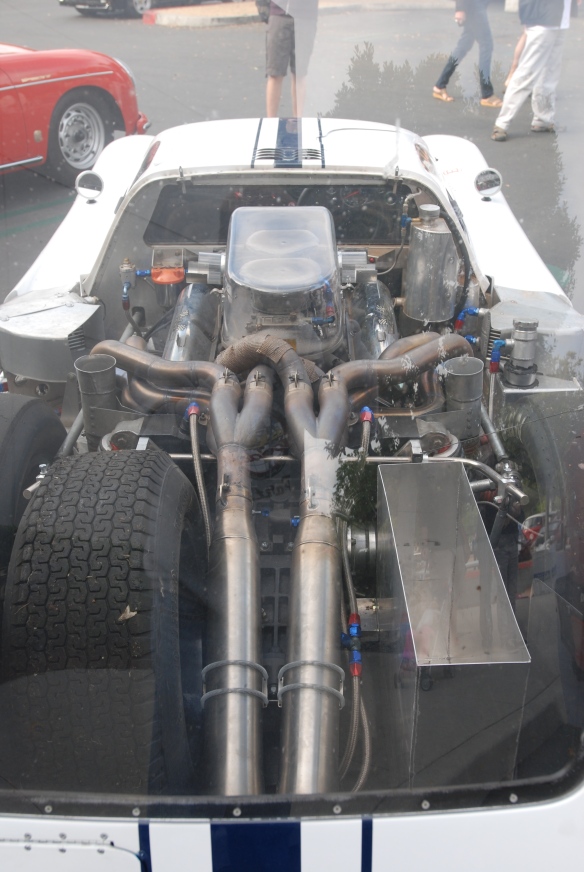 Sharing space; the 1967 Ford GT Mk IV and its neighbor, the red Porsche 356A Speedster. 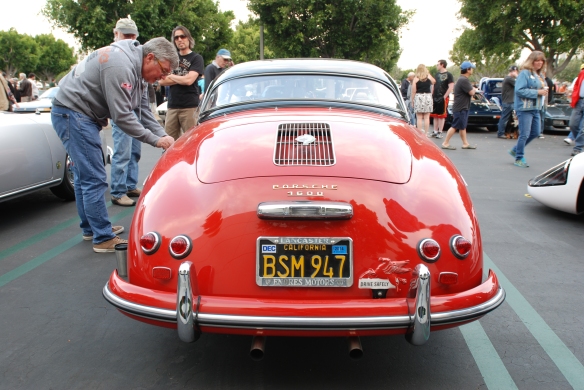 Further down the row, awaiting discovery by fans of english sports cars, was this beautifully restored Austin Healey 100, adorned by an assortment of rally badging, and flanked by a pair of driving lights complete with stone guards.

The Healey’s highly detailed interior. Equal in quality and attention to detail, on par with its exterior.

Another European classic encountered, parked amid a cluster of BMW’s. A spectacular, highly modified example of a mid 1970s vintage BMW 2002.

And as the fender graphics proclaim, a twin turbo, updated to the owners specifications, with a hint to its true potential revealed by the rear badging; “3002 ttii / twin turbo”. 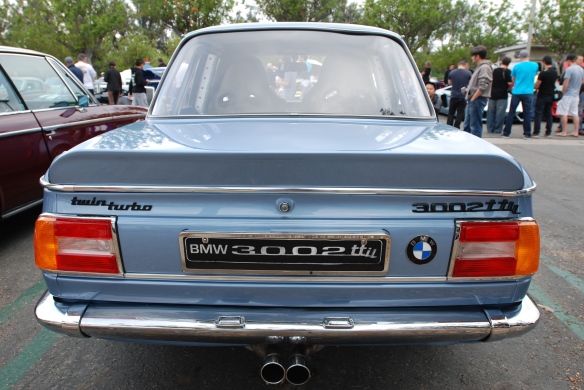 Another classic Ford present on this morning, and making what I believe to be its debut at cars&coffee. As seen below, a 1963 Ford Falcon Sprint, built by the firm VinRacer, as their interpretation of a period correct “Trans Am Racer”.

Vin Racer describes themselves as creators of “vintage speed”, dedicated to the building of high performance, pre-1969 vehicles specific to a client’s desires. For anyone interested, please use the link above to check out their website for a full description of their services. 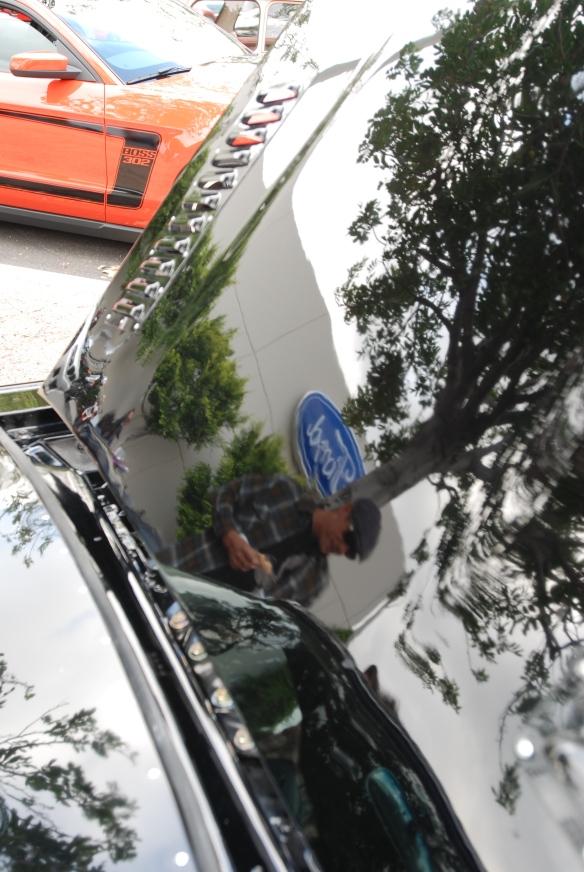 One of the last cars to leave the event that morning, yet still fielding questions from visitors interested in the Falcon. 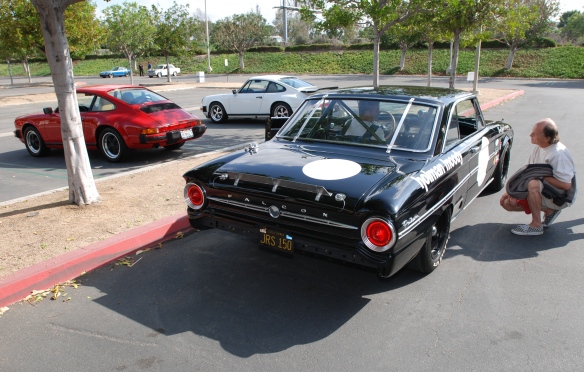 Another example of why attending this show on a weekly basis is so rewarding. Surprises abound, and regardless of your favorite make or model, you’re assured of finding a vehicle to capture your interests.