As a by-product of the unusually cold, clear mornings that Southern California has been experiencing, mother nature has produced some amazing lighting, which in turn translates to the beautiful highlights and reflections draped across a variety of vehicles present at cars&coffee/Irvine.

The following photos represent yet another opportunity for me to study and record the unique automotive highlights, reflections and illuminated details, as represented by the photos below… 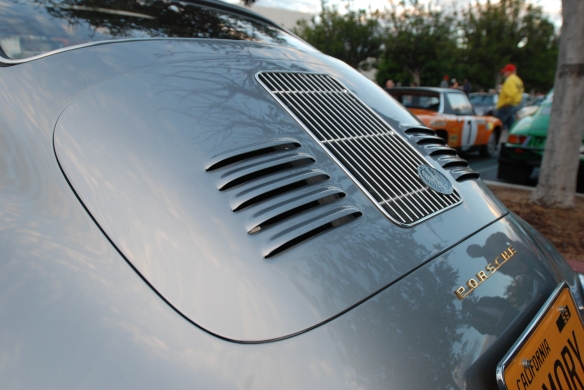 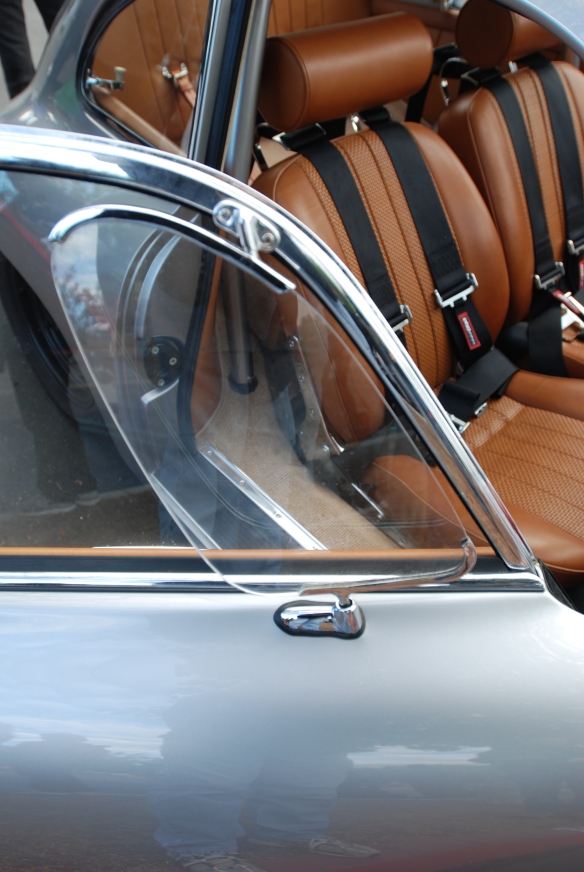 An incredible interior produced in saddle colored leather (as seen above). The scent of the leather instantly reminded me of sitting in my grandfather’s 1950’s vintage Mercedes-Benz cabriolet as a little kid, surrounded by its aromatic, red leather interior.

Even the fuel tank located in the front trunk ( below) was finished to the same level of detail as the silver exterior. The finish on the fuel tank shone like a mirror, recreating the images of the sky and cloud cover floating overhead.

A brand new 2014 Porsche 991 coupe, resplendent in Riviera Blue. According to the owner (who arranged for european delivery of this special order Type 991), and upon receipt of his car in Stuttgart, was told by Porsche that this is the only 991 that has been painted Riviera Blue… how cool is that! 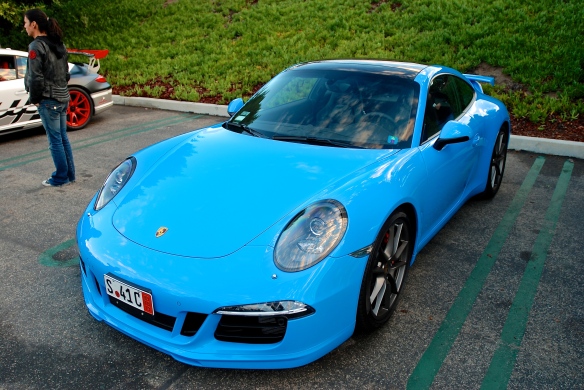 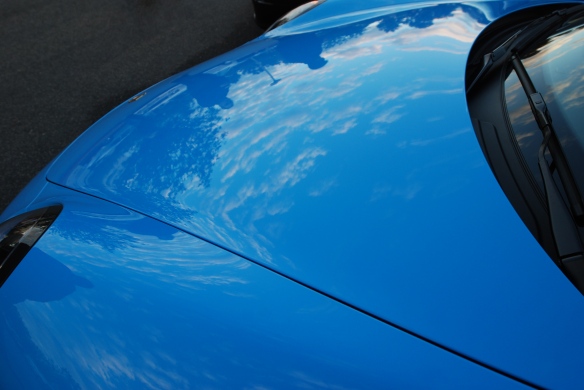 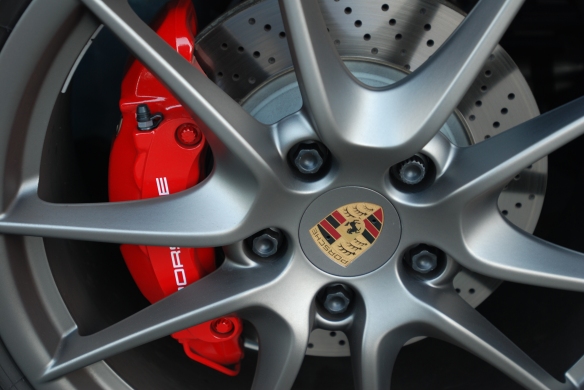 Parked among the group along Porsche row were multiple examples of 1970s vintage 914 models. In this case, the front hood of a restored tangerine colored Porsche 914-6, bathed in reflections.

My next stop would be at the Featured lot, where on this morning I encountered the stunning Jaguar XK-150 roadster seen below, parked amidst a row of Corvettes, and reflecting on its surroundings.

A close up of the XK-150s hood ornament and front grill badging. 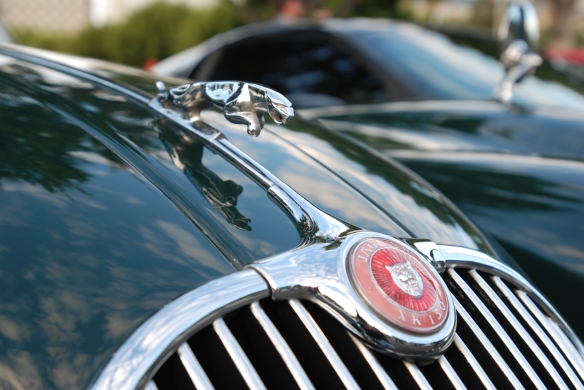 On the other side of the Featured lot were these two, brand new 2014 Porsche 991s courtesy of Walter’s Porsche from Riverside. The 911 Carrera 4S cabriolet as seen below, turned out to have been painted a very unique, and special order color. The color in question turned out to be Stone Gray, which was originally offered as a “special order color”, during the 1957 through 1959 Porsche 356 model years.

Another visible cue used for identifying a Type 991 Carrera 4S; the red, horizontal reflector strip, bridging the gap between the rear tail lights, and inset just below the rear deck lid.

Making a rare appearance at cars&coffee was this black (Nero Pastello) Ferrari 599 as seen below. One could not ask for a better color on a 599, for showcasing the incredible reflections wrapping themselves across the striking contours of the bodywork. 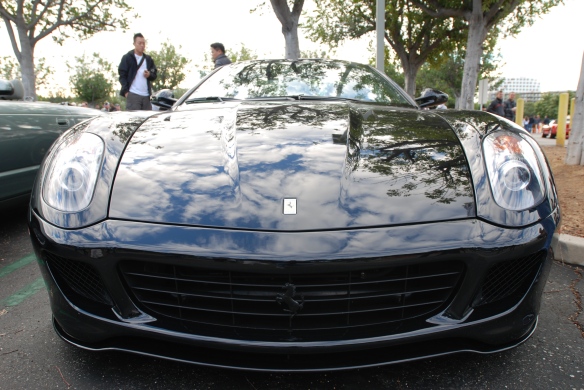 Even the side mirrors held surprises for anyone willing to stop and take the time to study the variety of details found across the Ferrari.

The Ferrari 599 stealth fighter at rest, basking in the morning’s light…

Returning to Porsche row, I came across another frequent visitor; this beautiful Irish Green 1968 Porsche 912, complete with reflections defining the contours of its front hood and fenders. 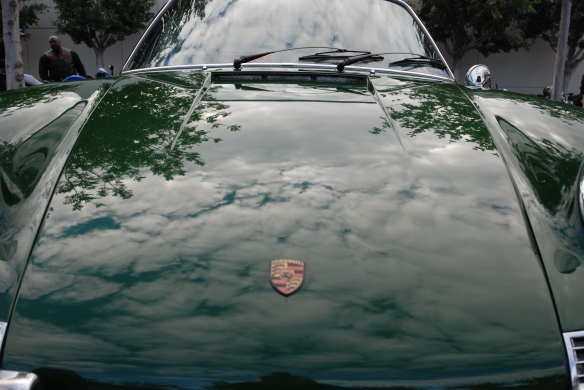 One of the late arrivals to the featured lot seen below. A black Ford GT 40 Mk II recreation, shining like a mirror, enhanced by the spectacular, form defining reflections. 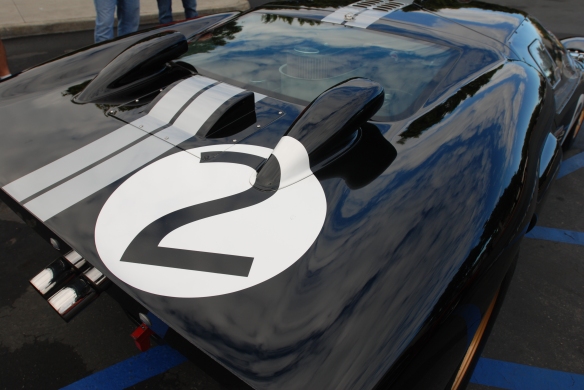 And last but not least, a beautifully maintained, India Red Porsche 911 SC, complete with its German license plate below.

Come to think of it, I did see a large, jolly looking man in a red coat and white beard  casually walking through the crowd that morning. Could this license plate be a clue to his identity?

Merry Christmas and Happy Holidays to all…