With only two months remaining in the year-long celebration of the 2013, 50th anniversary of the Porsche 911, there seems to an ever-increasing number of Porsche 911s in attendance each week at cars&coffee. For anyone with a passion for the Porsche brand (and especially for the 911 model), this event is worth a visit. And on Saturday morning October 19, a majority of the Porsche models present turned out to be early 1966-73 (long hood) models. 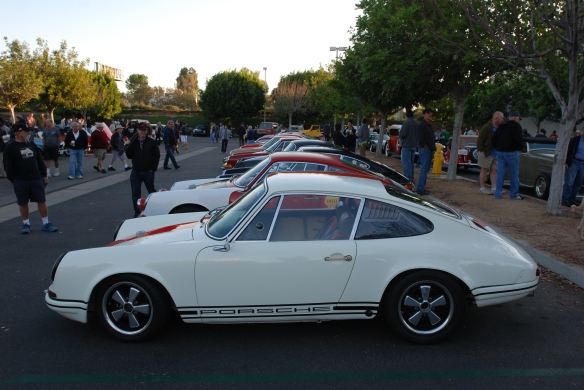 Leading the group and parked amidst its early 911 brothers, was the white with blood orange striped, 1967 911R tribute, making its long overdue re-appearance (as seen above). Over the summer, this car underwent further modifications and detailing to its suspension and chassis, and on this morning was being displayed in preparation of it being offered up for sale. 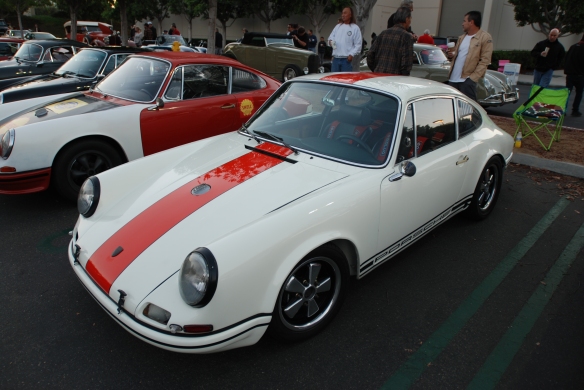 The classic Cibie Biode headlight benefitting from a 2013 technology enhancement; aerospace grade re-plated reflectors, working with three separate lamps per headlight, and when collectively combined, able to deliver 280 watts of searing illumination, all focused through a set of fresh european lenses (above & below). 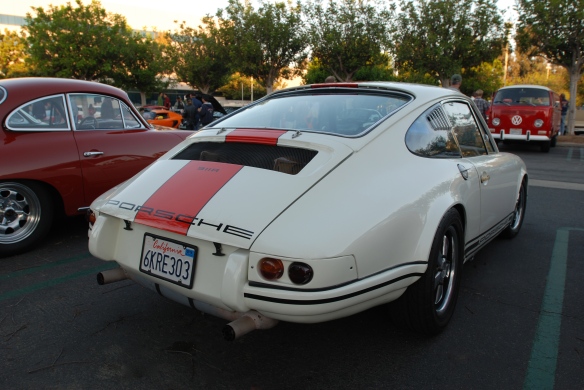 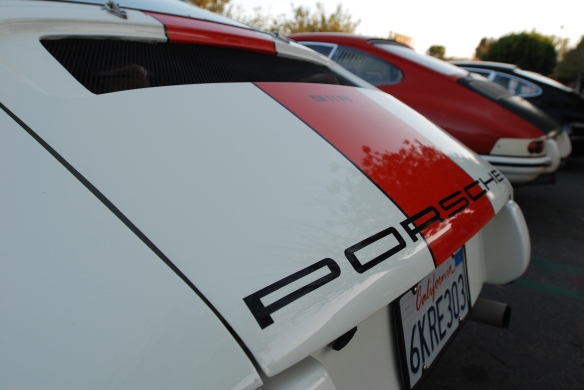 And parked just two cars further up on Porsche row was one of the multiple RGruppe Porsche 911s present. In this case, the beautifully maintained, black 1970 911S seen below.

Another of the RGruppe 911s located immediately across from Porsche row; a pristine 1973 911T, finished in the rare Aubergine (eggplant), Porsche paint code 025. 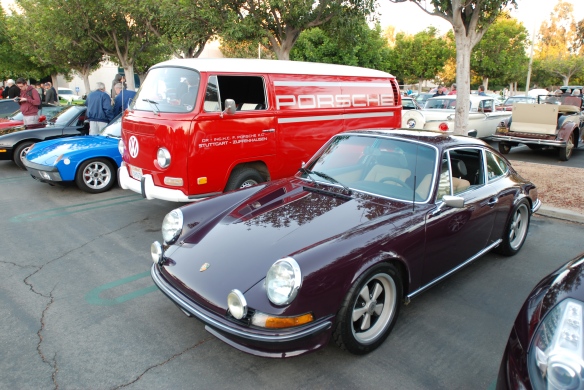 One of the non 911 Porsches present; a 914 with fresh paint and new motor transplanted from a benchmark 911; the very cool 1973 Carrera RS, and its ever potent, 2.7 liter Carrera RS motor.

The seldom seen rear (european market only), model branding badge (above & below).

Getting back on track and to the overall theme of this posting, parked across the aisle and located off to the left were two more early, mid-sixties Porsches; one a Polo Red 1966 911, and its neighbor, an Irish Green 1968 912. 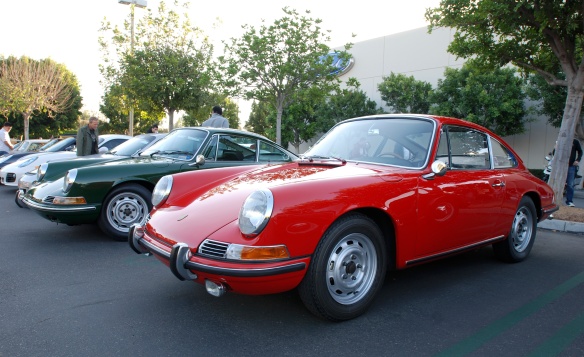 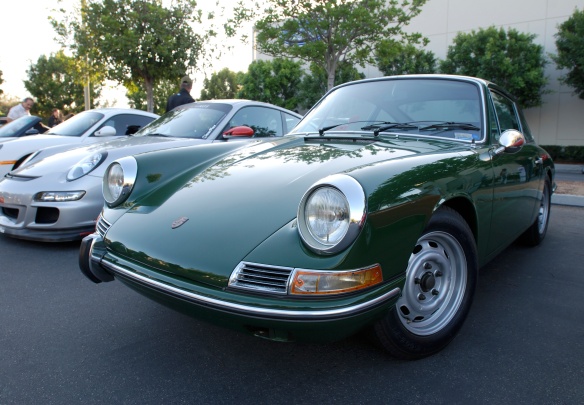 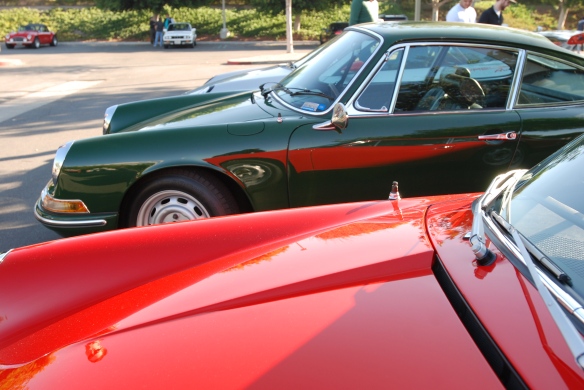 And last but not least, an early morning shot of a 1948 Bellytank Lakester (seen below). This vehicle was being shared courtesy of Photographer / Director, Porsche Collector, Race car driver and frequent cars&coffee participant, Jeff Zwart. 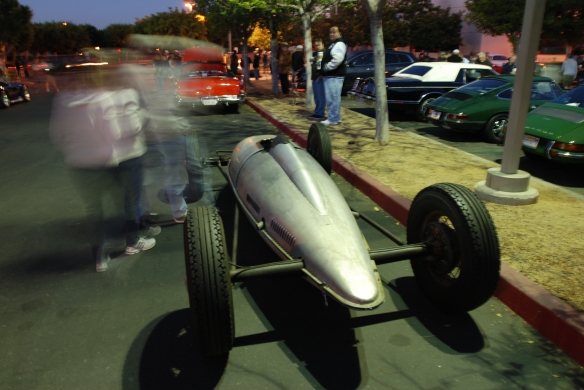 So should you have an interest in the Porsche vehicles, you can expect to find a diverse cross-section of Porsche sports cars present at this weekly show.  But should your passion be focused on the 911, cars&coffee is the place to join in on the remaining two months of the year-long, 50th Anniversary celebration of the Porsche 911. And who knows what classic Porsches could make an appearance. Can you say Porsche 918 Spyder?

9/17/2013… Hard to believe that two years ago to the day, my blog digitaldtour was published for the very first time on WordPress.com. And now, I would once again like to thank all of my followers for your continued support and feedback, both by email as well as conversations in person regarding my previous 101 blog posts. I also hope that you will find my future postings to be both informative and entertaining.

2014 promises to be another incredible automotive year,especially if you like Porsches and I look forward to sharing my automotive adventures and discoveries, so please stay tuned…

Today marks the one year anniversary of the debut of my blog, digitaldtour. Never in my wildest dreams could I have imagined the positive feedback and support that I have received during my first year of writing, and sharing my photographic passion for Porsches and all things automotive through my blog. During this past year I have had the opportunity to meet some incredible people who I can now count as friends, and I really appreciate them taking the time to share their automotive stories with me.

I would also like to thank everyone who has subscribed to my blog or has simply taken a moment to read one of my posts or check out the accompanying photos. I hope you will continue to find my blog of interest and worthy of a return visit.

As I stated one year ago, the launch date of my blog was significant in that it shared a series of numbers commonly associated with the Porsche 917K, which has always been one of my favorite Porsche race cars, and is still synonymous with the classic Porsche race cars of the 1970s. So imagine my delight at the opportunity to come face to face with this beautiful, 1969 Porsche 917 K at Porsches Rennsport Reunion IV, as seen below… 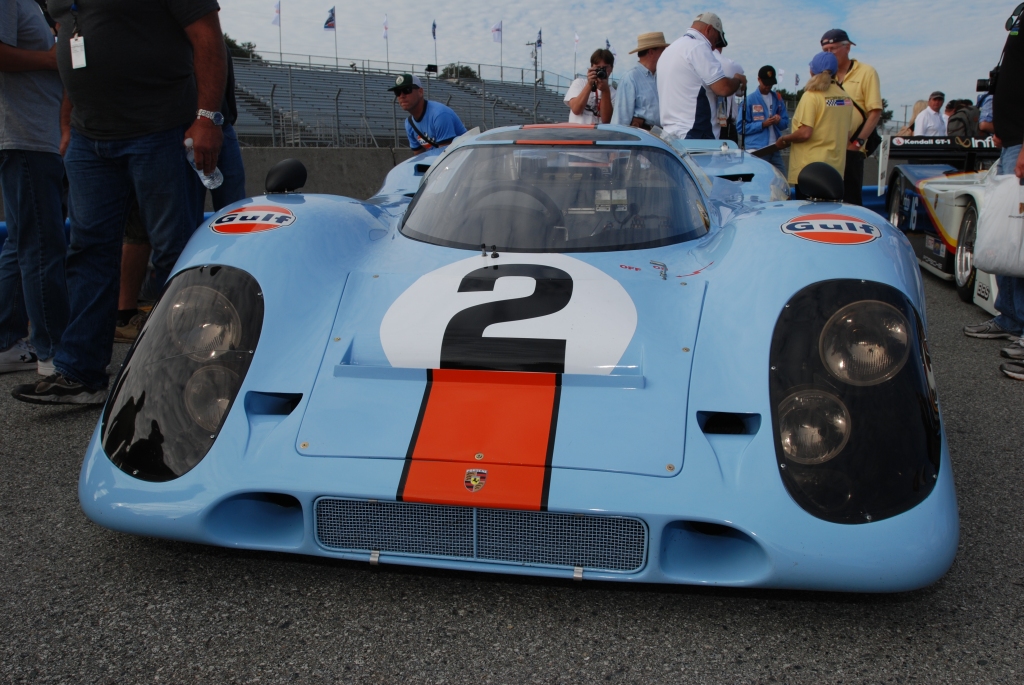 So here’s looking forward to a second year of blogging, and the cool cars and stories just waiting to be discovered and shared…