A fog, like something out of a Sherlock Holmes mystery, descended on the Orange County, California coastline last Saturday morning, and stretched inland well past the 5 freeway. As I made my way south down said freeway, I  began hitting patches of very heavy fog with severely reduced visibility, and then a few miles further south, clear sections with no fog at all.  Unfortunately, the closer I got to Irvine, the heavier and wetter the fog became. By the time I arrived at Cars&Coffee, my car was cloaked in condensation.

After parking, and while visiting with several friends, I noticed a white Porsche GT3 RS as  its headlights pierced the fog drifting through the lot, on its search for a place to park.  As it approached, I realized it was actually a GT3 RS4.0, and perhaps the one I had been chasing over the past several weeks to photograph. However as it passed, I noticed it was missing the rear license plate, which meant that this was not the car I had seen previously, since the other wore a California plate. This Porsche would be my first photographic subject of the morning, but not until I made my way to the catering table to get some hot chocolate and a doughnut, in an attempt to thaw out from the cold and damp. However, on my way back to my car to collect my camera gear, I stopped to check out the white GT3RS 4.0.  While I circled the Porsche, and worked on finishing my doughnut and hot drink, I began to notice a few subtle changes made to the car.

Viewed from behind, one not so subtle change was the inclusion of a white roll cage, adorned with an RSS graphic.  As several others stopped to question and comment on the origins of this roll cage (was it factory or aftermarket, and how much larger was the tubing diameter over a factory cage?), a gentleman approached and confirmed that it was in fact a larger diameter, aftermarket cage, supplied by the firm RSS.  It turned out that he was in fact the owner, and after we began talking, was kind enough to share some of the details regarding the modifications made to his car.

Starting at the back, I learned that the rear wing struts had been powder coated black, and that the exhaust had been upgraded with the addition of an RSS  X -pipe. 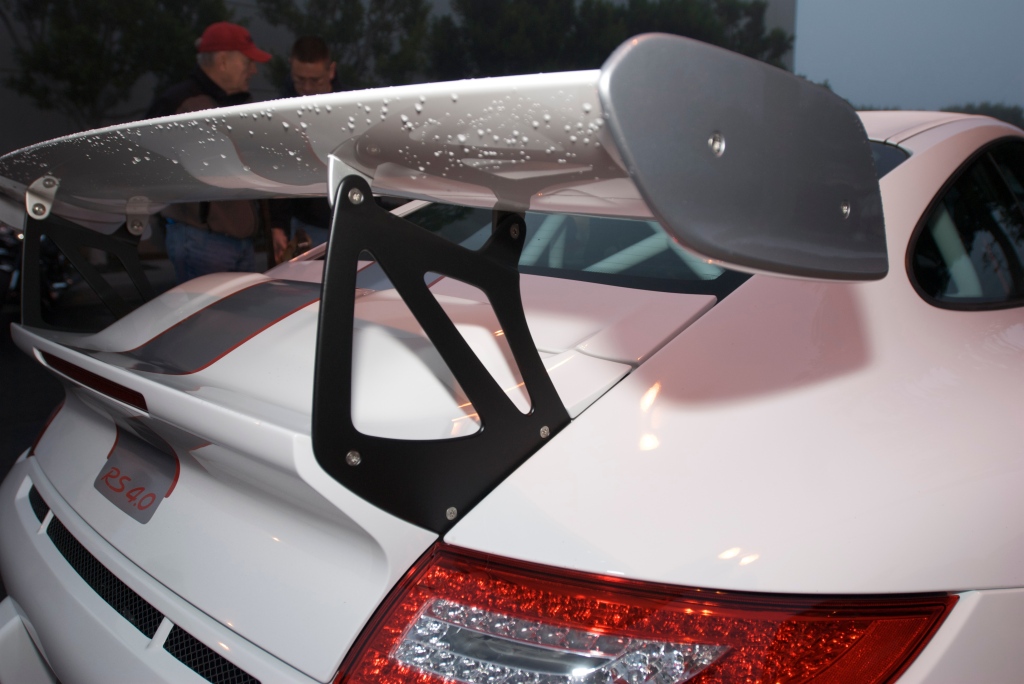 In regards to the running gear, the suspension components had been upgraded and the suspension lowered (below an already low stock ride height). The centerlock wheels were now in black, and the rotors and hats had been swapped out to compliment the Porsche Big Red calipers, instead of running the standard issue, yellow Porsche PCCB brake calipers and rotor sets. The interior had also been altered, with the removal of the stock Porsche sport seats (with the red Alcantara inserts), replaced by a set of all black Recaro race seats, each equipped with its own set of competition belts. 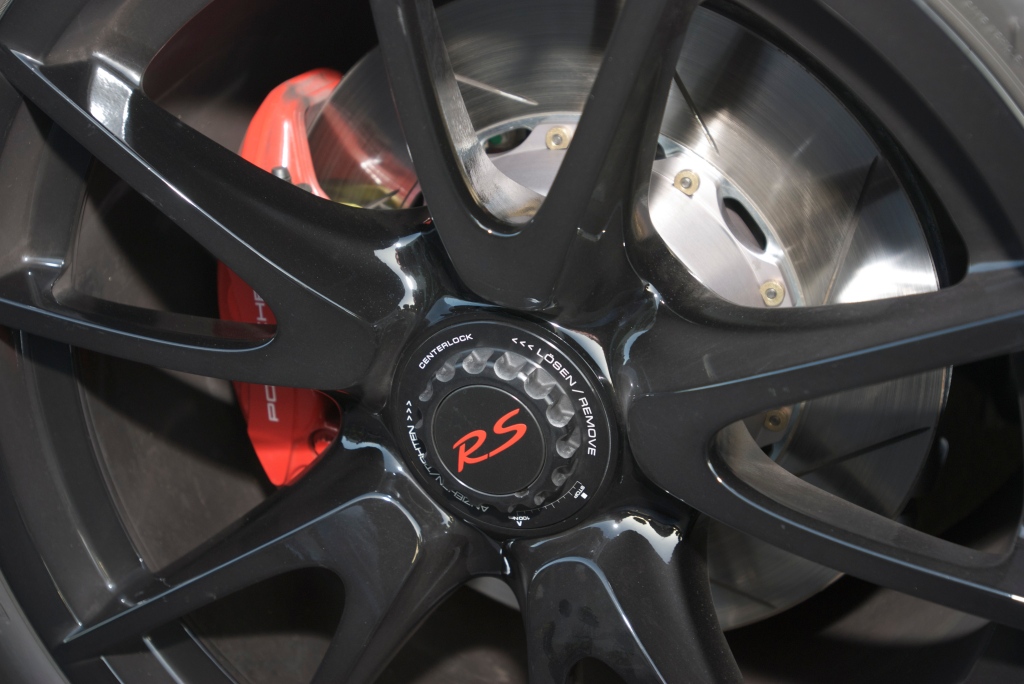 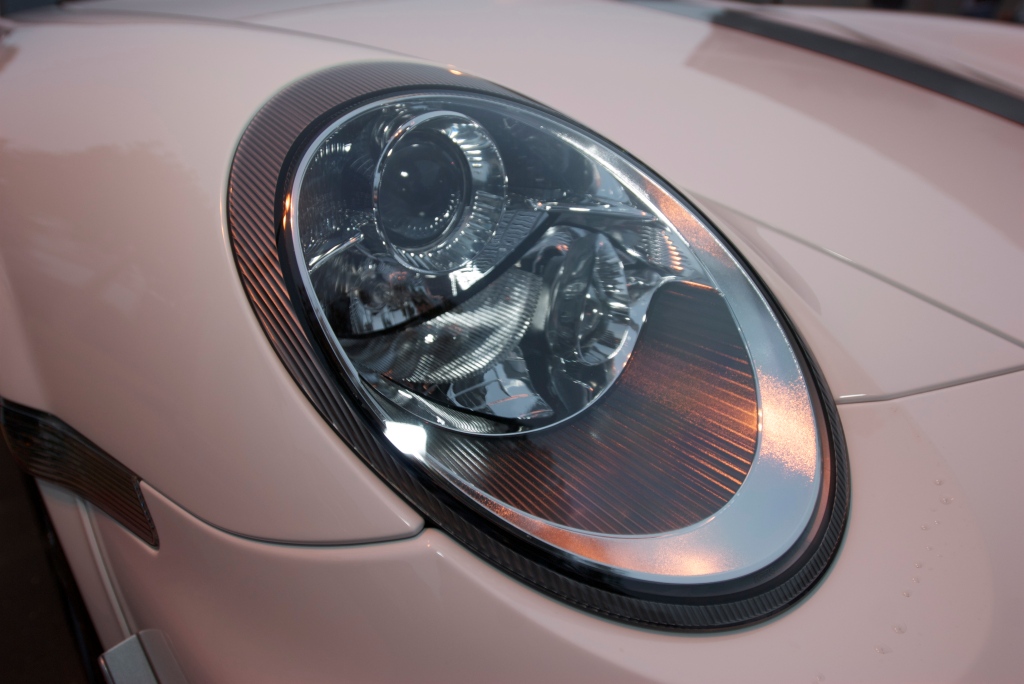 I happened to mention to the owner that his car was the fourth GT3 RS4.0 that I have been lucky enough to see in person, and that my first sighting was at the Porsche Rennsport Reunion IV in Monterey back in October. Much to my surprise, this owner knew who the other owner of the RS4.0 from Rennsport Reunion IV was by name. Out of curiosity, I asked the owner what number his car was out of the 600 produced; turns out his GT3RS 4.0 is number 257.

I have now been fortunate enough to have photographed 4 out of the 600 produced. I thanked the owner for sharing the details of his car with me, and then I was off to check out the remaining cars at the show.

Now located just two cars in front of the Porsche, was this stealthy, Black on Black Callaway Z06 Corvette.

Both the hood and rear deck were opened, revealing the contents. Out back, was a custom roll cage complete with chassis bracing, and finished in a dark charcoal gray. 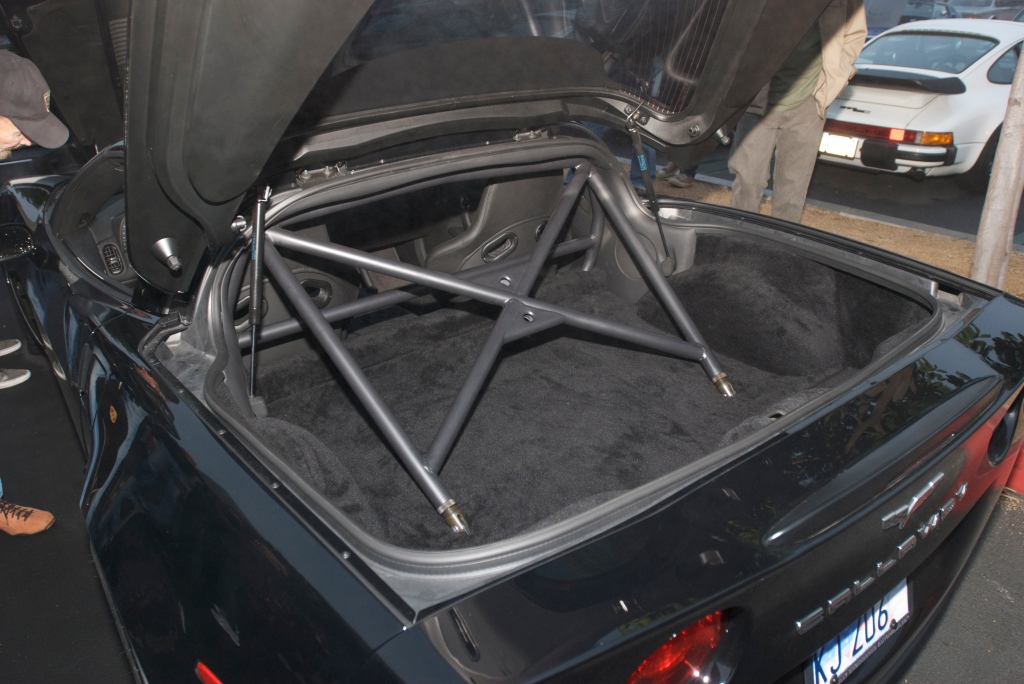 However, up front was an even bigger surprise; mounted on top of the Z06 motor was a shiny silver supercharger, framed on each side by a set of Callaway carbon fiber coil pack covers. 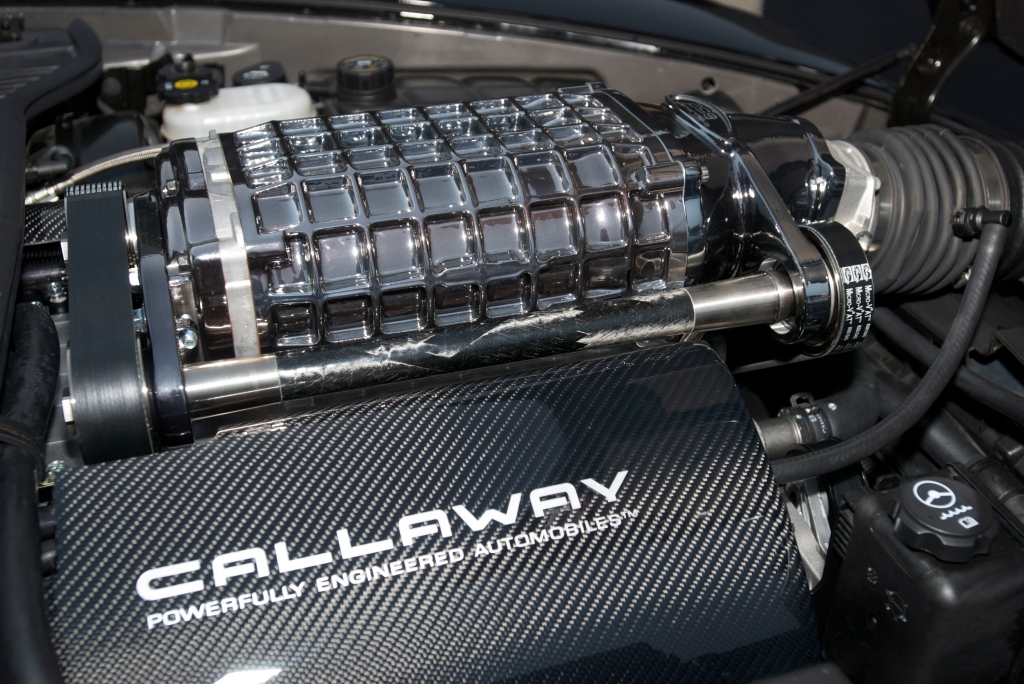 And perched on top of the hood, was a louvered, carbon fiber cowl induction insert… 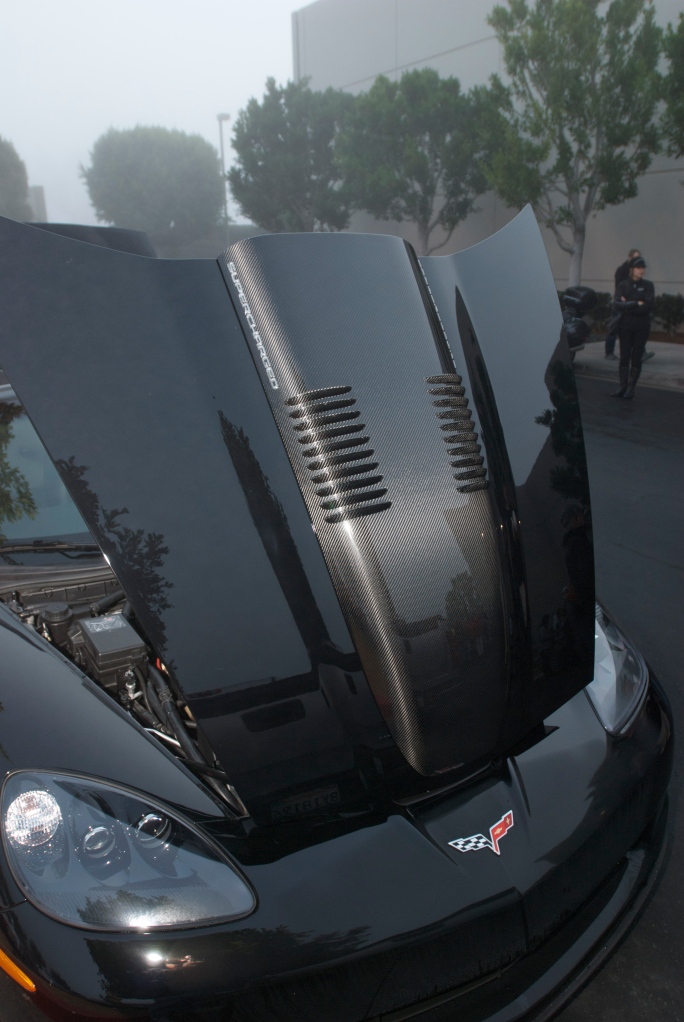 Now it was time to check out the Porsche faithful, lined up along the first two rows… 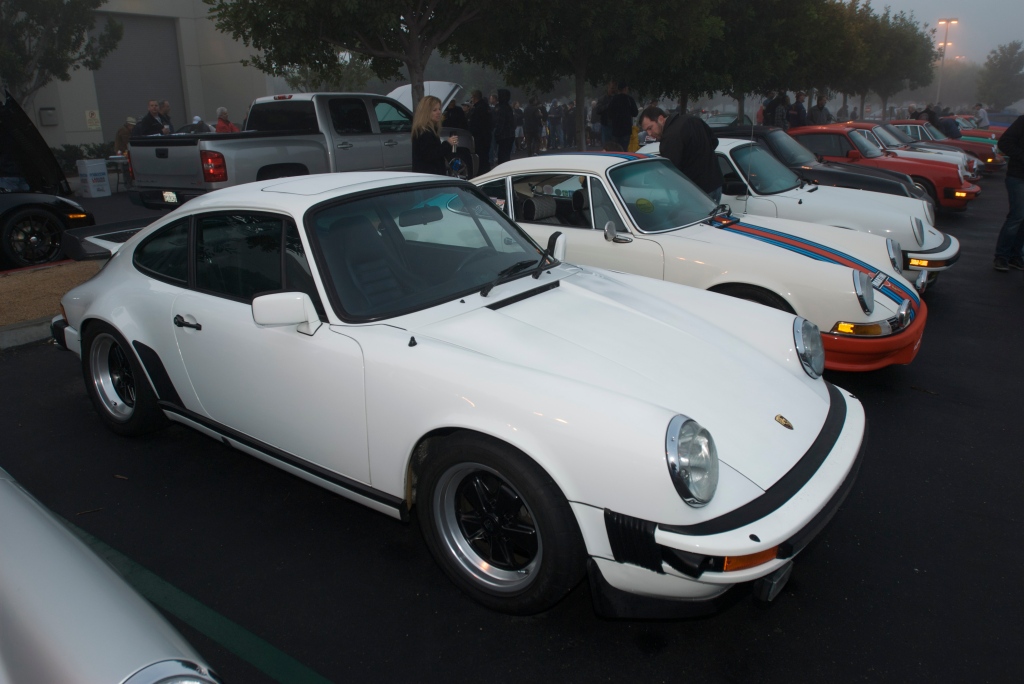 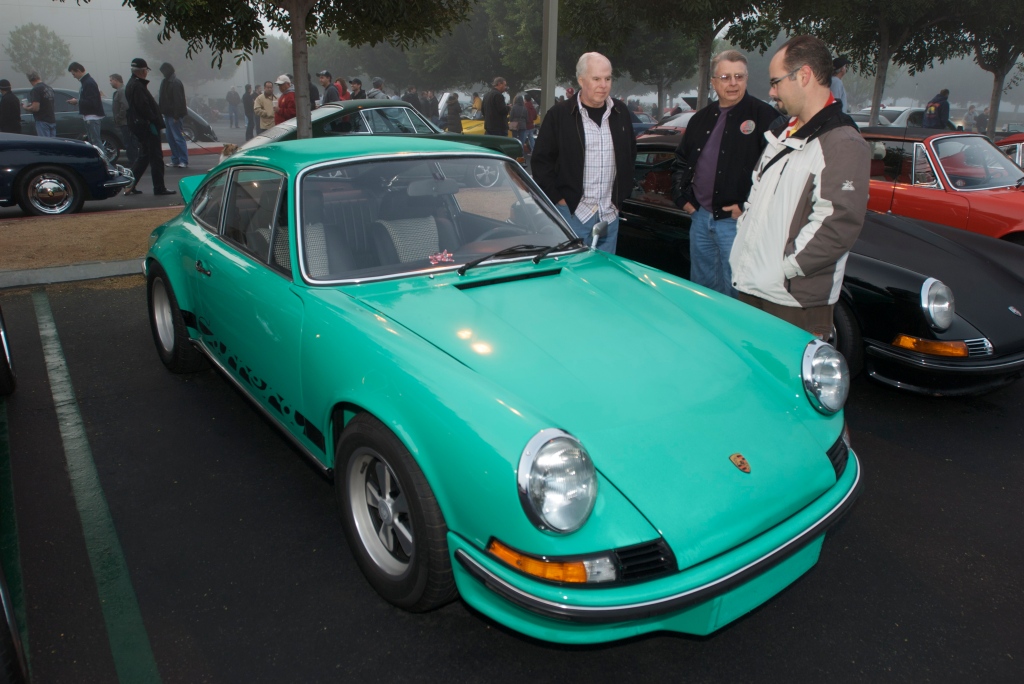 ( I asked the owner about the significance of the red bow; it turns out that it was the cars 1 year anniversary since being debuted here at Cars&Coffee, upon the completion of its restoration). 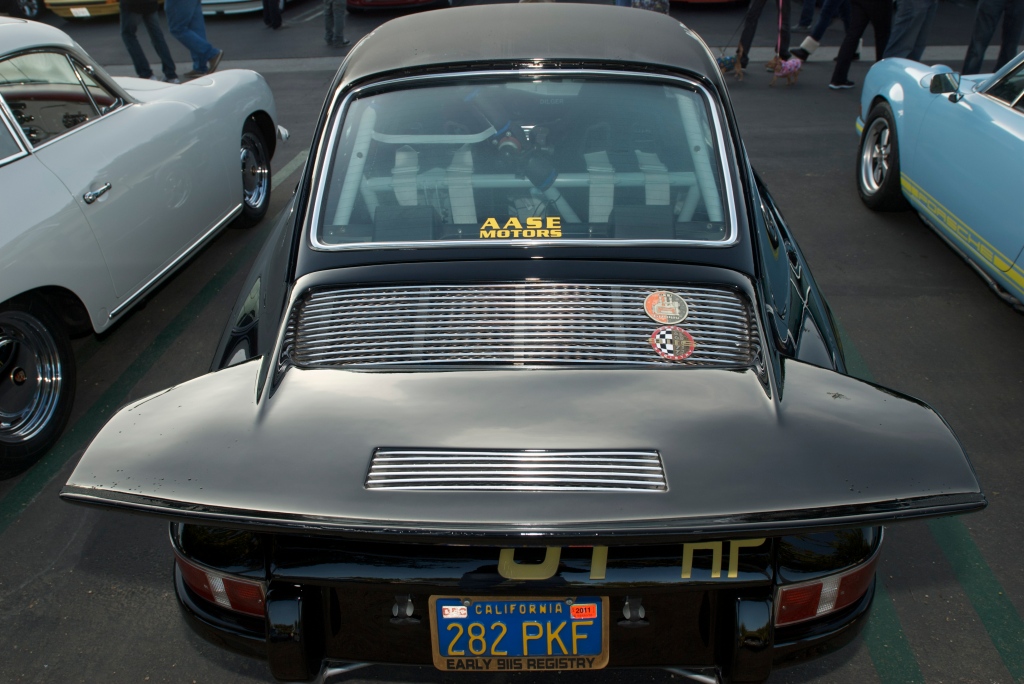 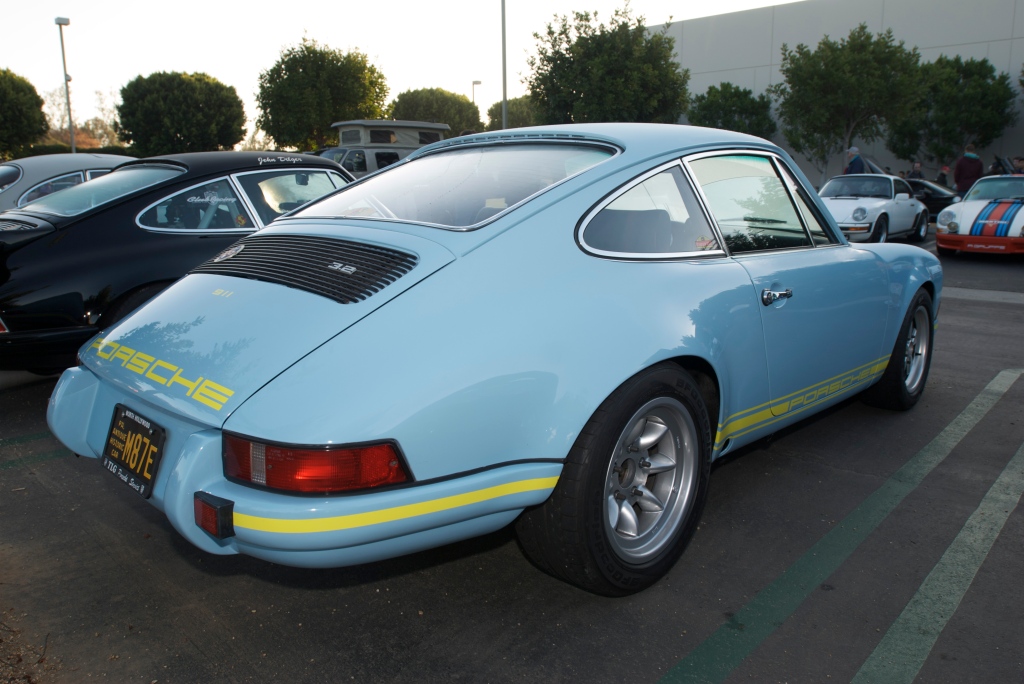 Located over in the parking lot, just across from Porsche row, were these two amazing British racing green Jaguars; one an E- type 4.2 liter and the other an XK roadster… 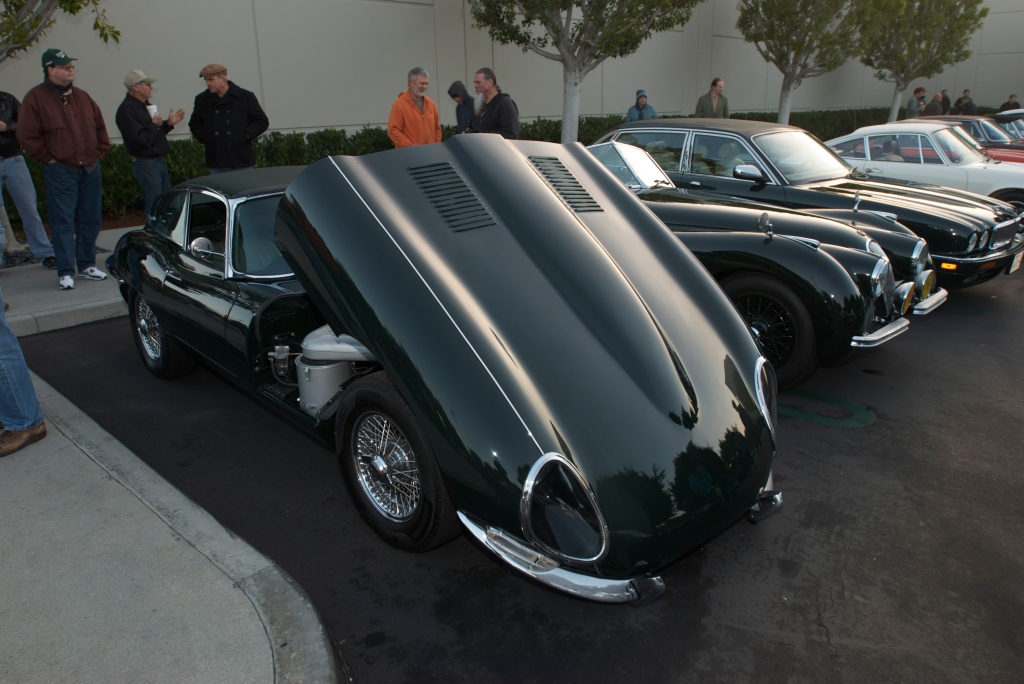 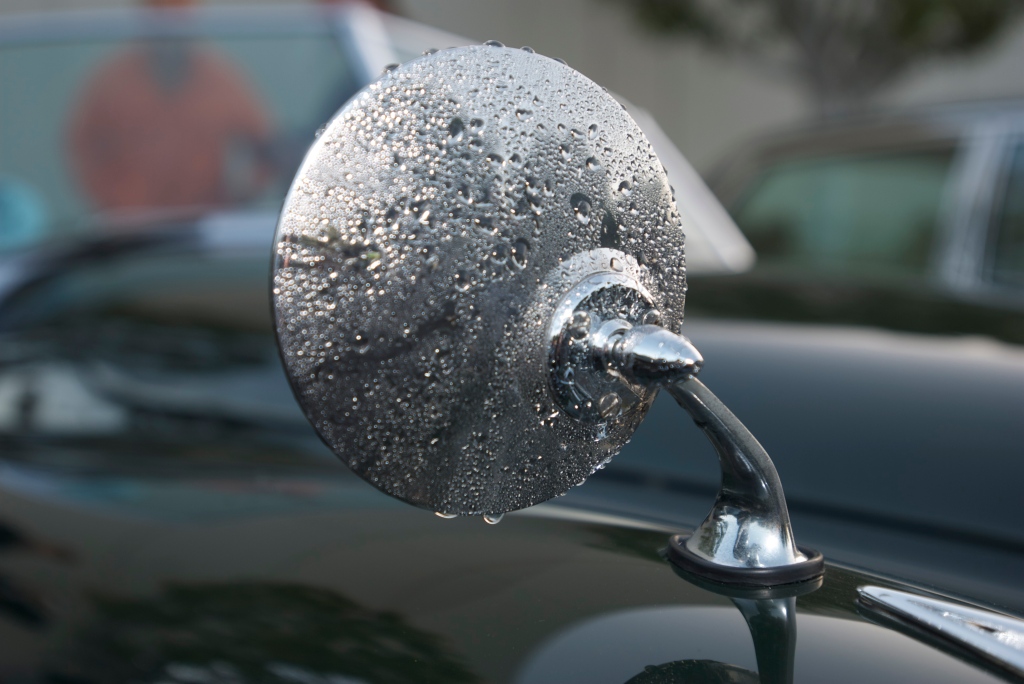 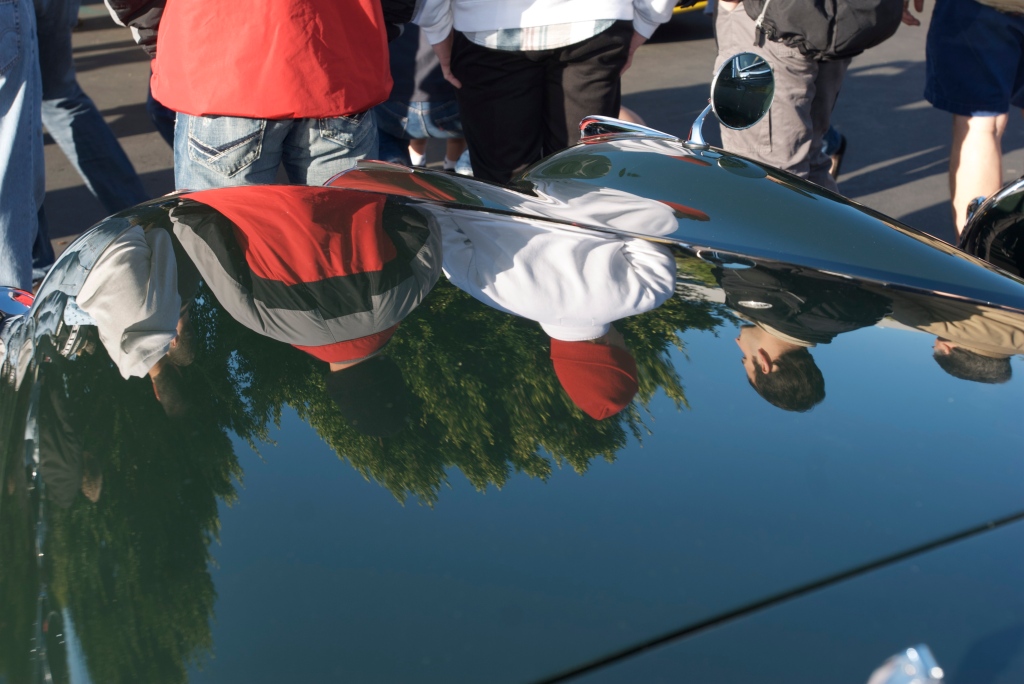 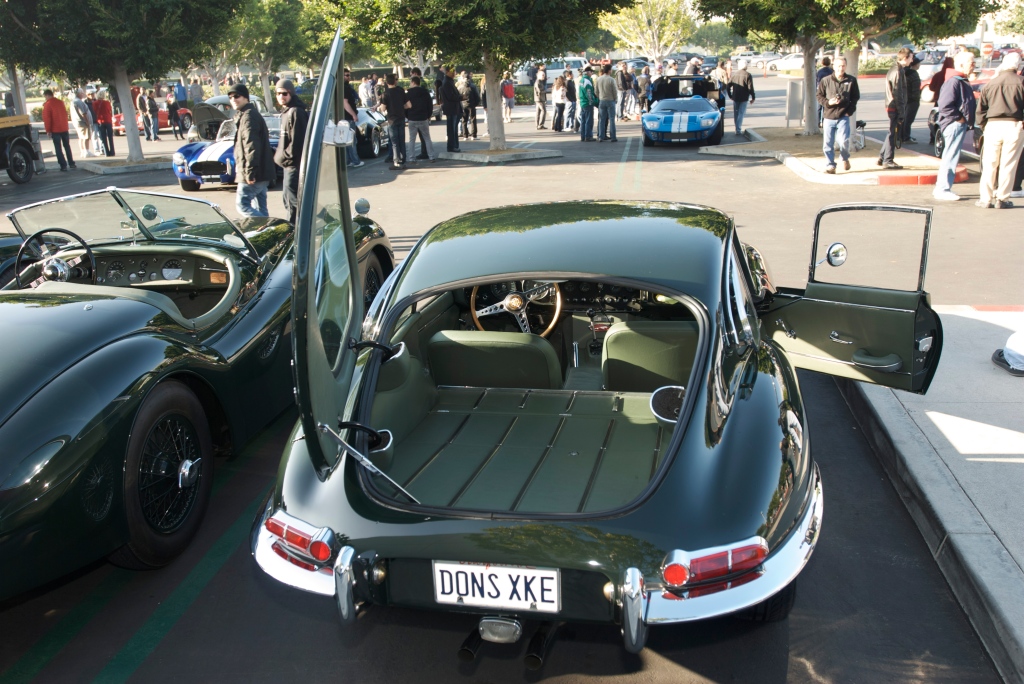 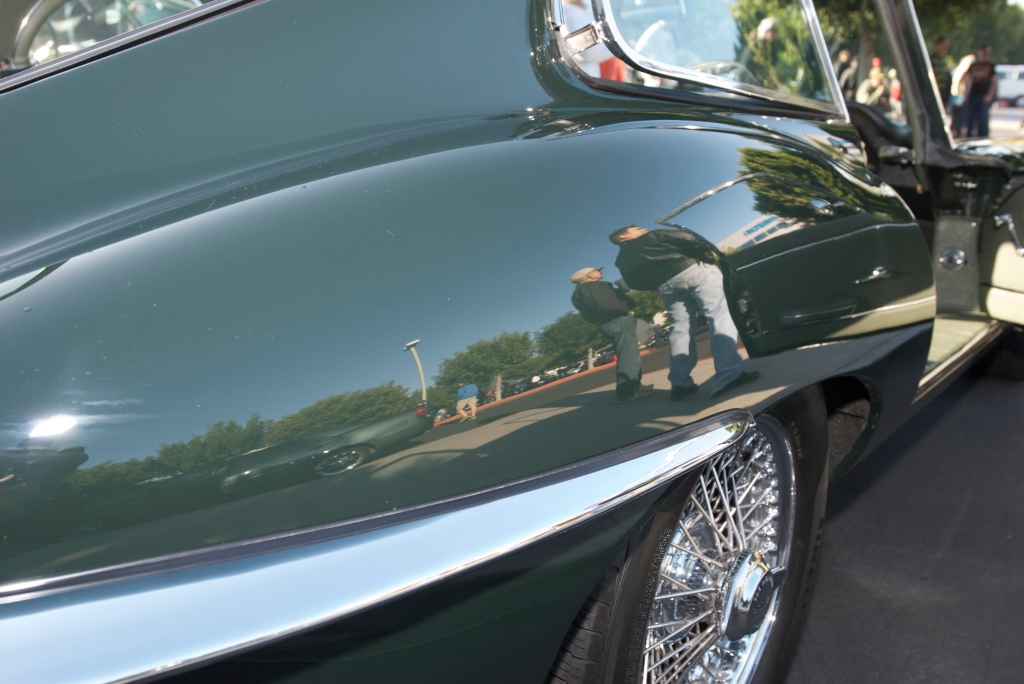 After shooting the two Jaguars, I noticed a white Porsche parked at the opposite end of the row. As I approached, it appeared to be a GT3RS, however as I got closer I saw the telltale stripes of a RS4.0. I could hardly believe it, two out of 600 worldwide, and both in the same parking lot at the same time. However, this car in addition to being brand new, was also completely stock, so only a fraternal twin to the other GT3 RS4.0. 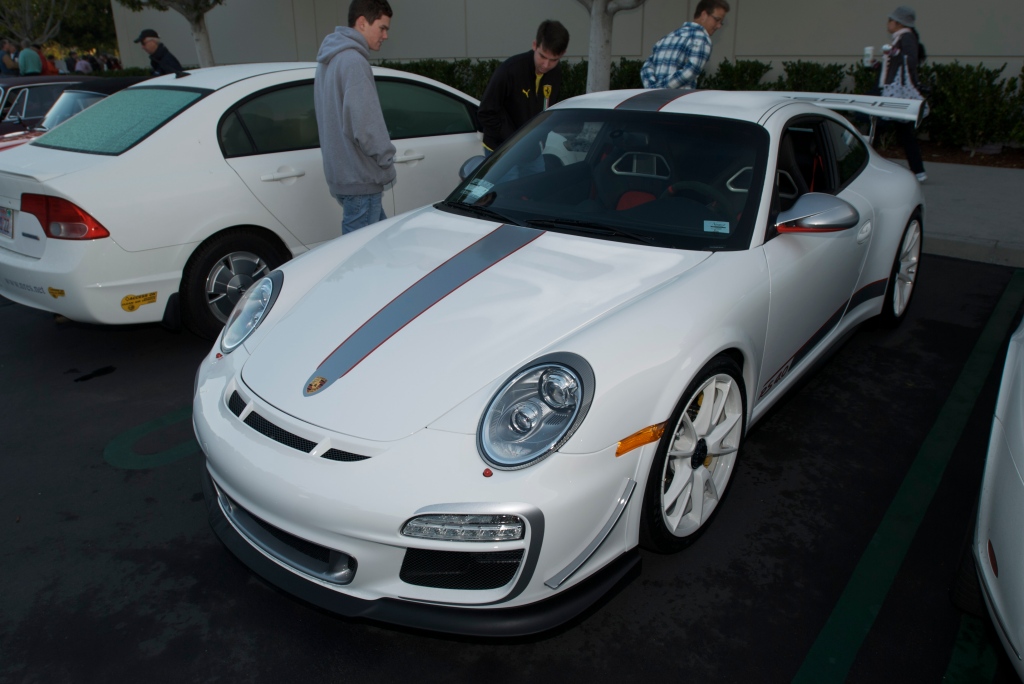 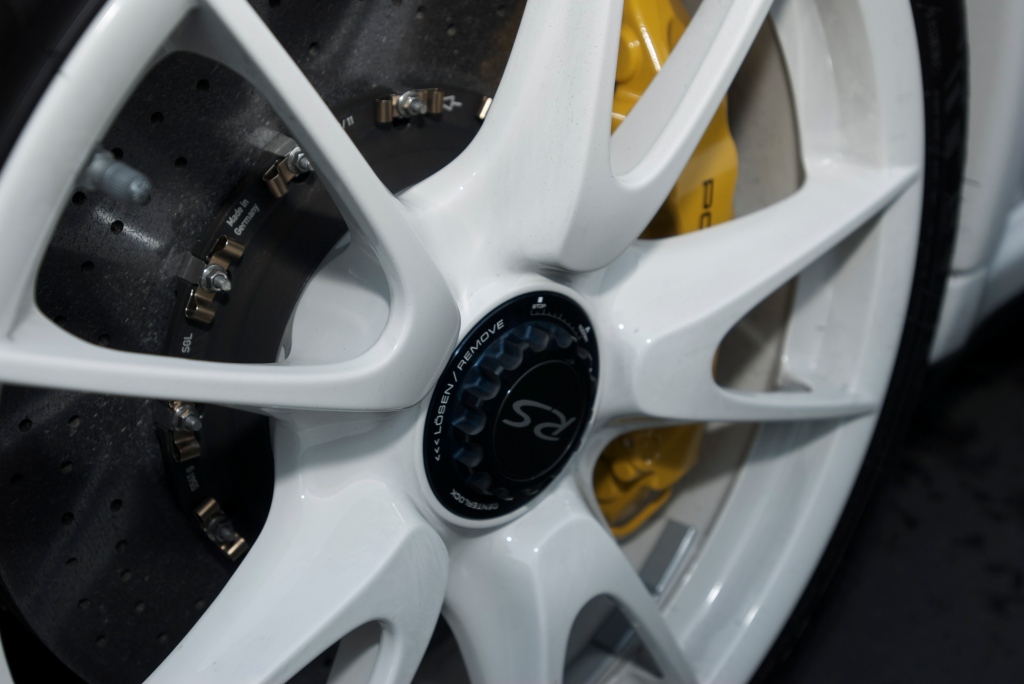 Unfortunately, I was unable to find its owner, to inquire about this cars series number out of the 600 produced. Maybe next week…

The rest of my morning was spent walking the parking lot in search of the next hidden automotive treasure. The following photos represent just a few of the other jewels found scattered throughout the lot… 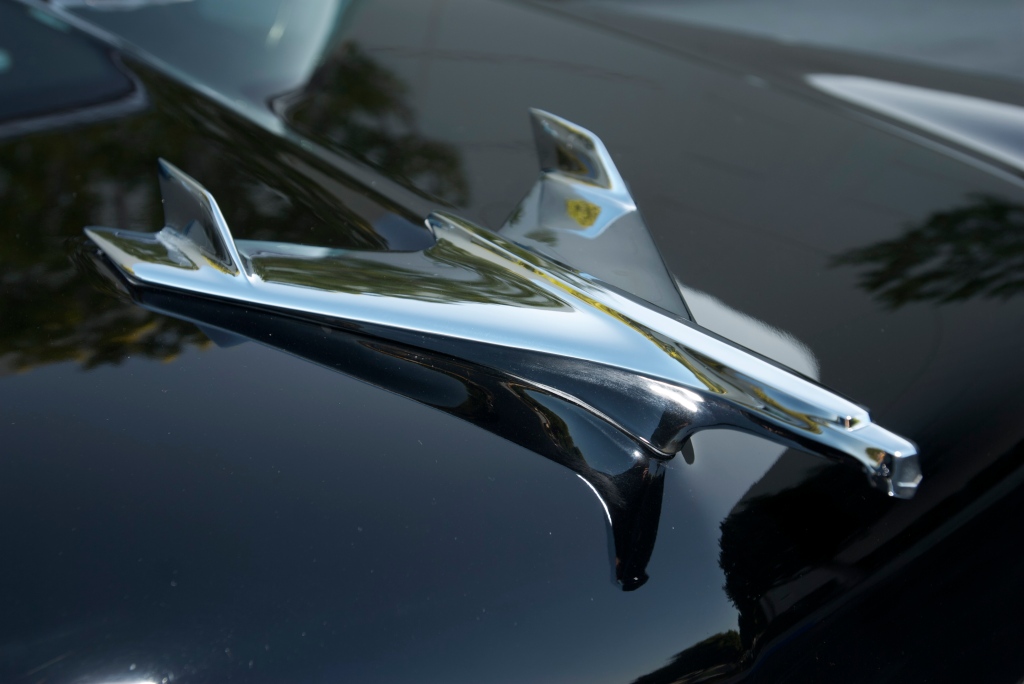