Webster’s dictionary defines Archaeology as “the scientific study of material remains, artifacts and monuments) of past human life and activities”. With each new sunrise illuminating Saturday mornings Cars&Coffee event, this study can be undertaken by anyone present.  And as I have noted in previous posts, one never knows what treasures await discovery.

Last Saturday morning while still under the cover of darkness, my friend Jeff and I watched as a slate gray Detomaso circled the parking lot, apparently trying to decide where to park. As it circled, we tried to figure out whether it was a 1970’s vintage Pantera, or a mid sixties Lamborghini. As it approached where we were standing, it passed us and then  circled back to stop right next to us. It was then that we realized it was a 1969 Detomaso Mangusta, predating Detomaso’s Pantera model.

Once the owner was out of the car, he walked to the back and opened up the rear deck, which on this particular model articulate like the wings on a butterfly (above and below)…

In my four years of attending this event, I think this is the first Detomaso Mangusta that I have seen participate. 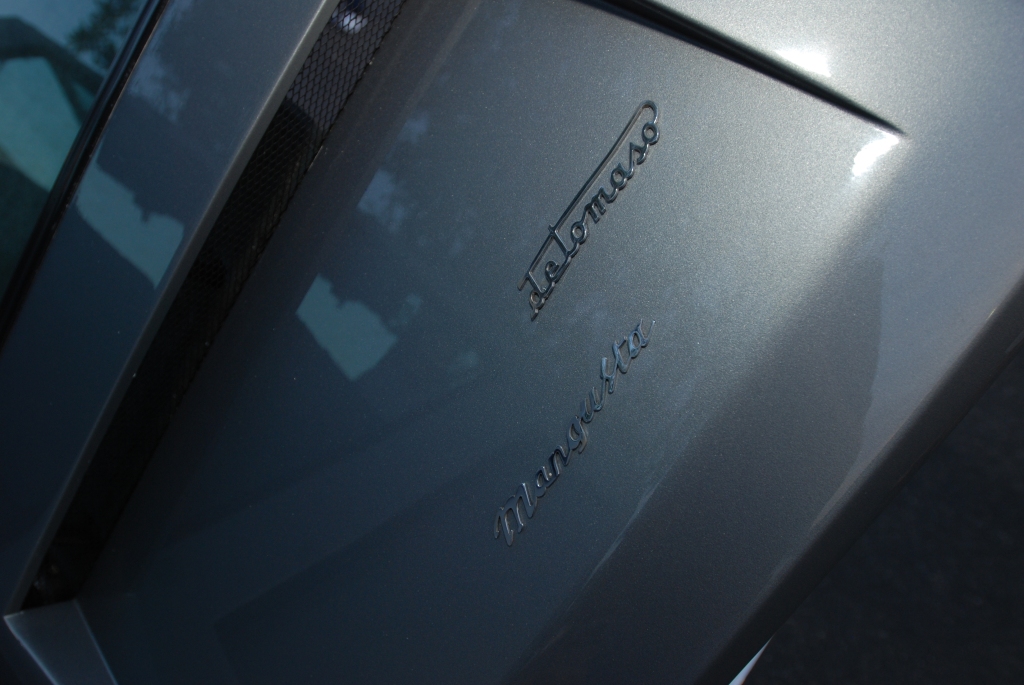 In stark contrast to this european model, and parked on the opposite side of the lot, was my next find; an example of a classic american custom, as represented by this chopped top, lowered 1951″Purple” Mercury, built by RD Kustoms. 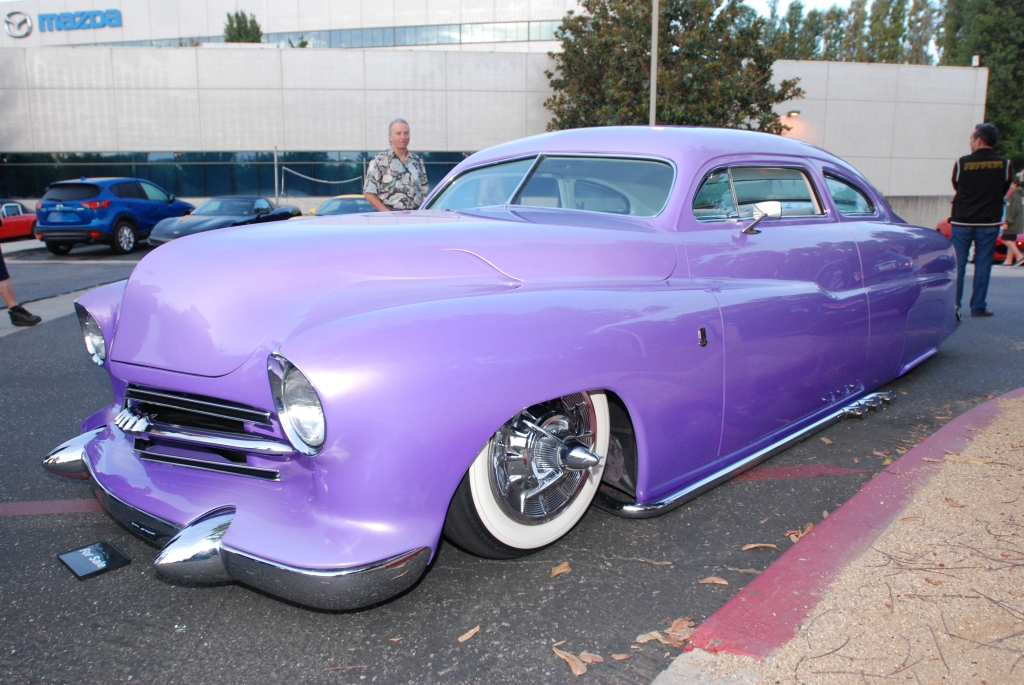 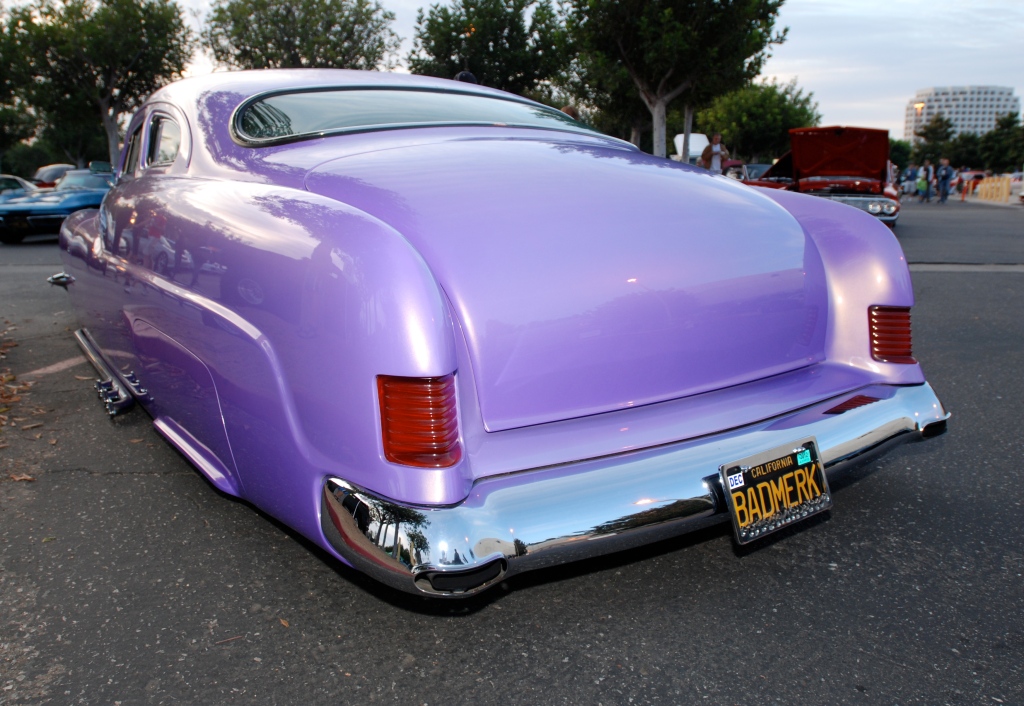 From here, I headed over to the featured lot, where I uncovered yet another classic; a silver Porsche 904 Carrera GTS, circa 1964 (as seen below). 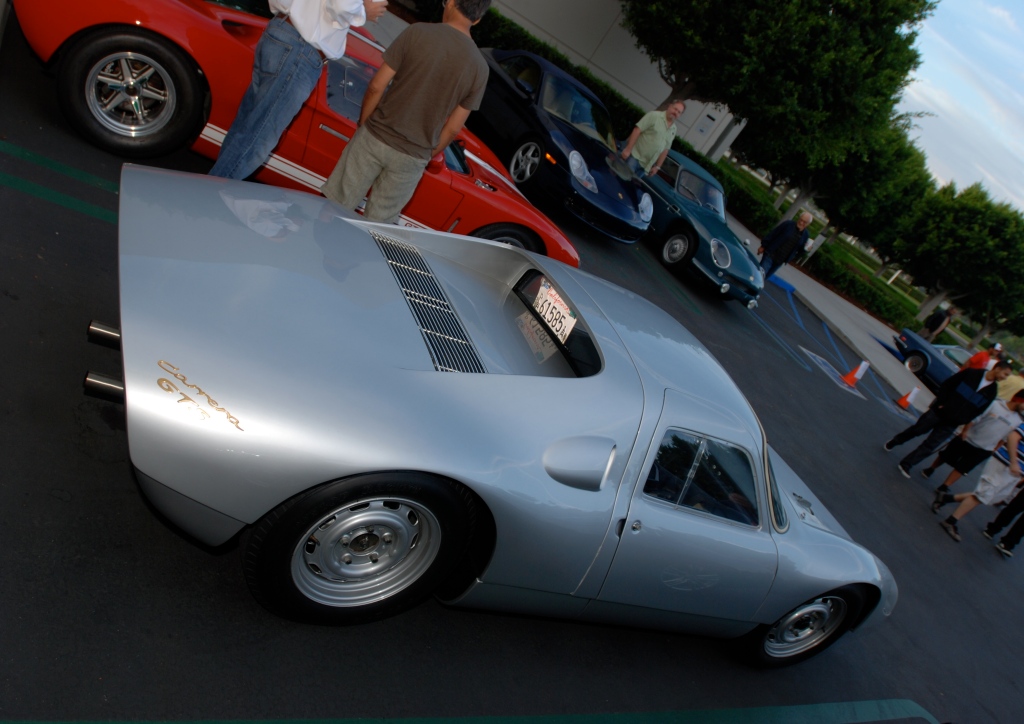 Over on Porsche row, I encountered this beautifully restored, Irish Green 1965 Porsche 911.

Back in the engine compartment, one telltale clue as to the build date for this particular 911 (as seen below), are the dual Solex carbs as installed. These could also be found on the early 1966 911 models, only to be replaced by a pair dual Weber, 40IDA3C carbs when Porsche resumed their production on March 2, 1966. 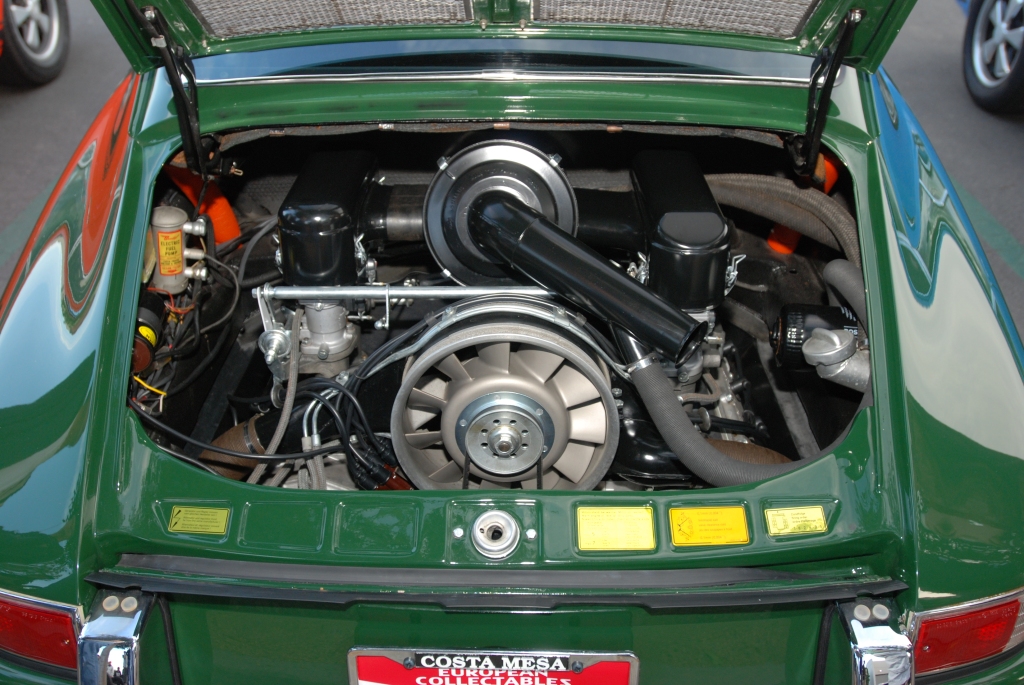 Several rows over towards the west was another rare Porsche; in this case an Ivory colored,1955 Porsche Continental coupe (below).

As seen below, this designation as well as the fender badging displayed was unique to the 1955 model year only, as it was discontinued for the 1956 model year, due to a cease and desist letter from the Ford Motor Company, claiming the U.S. rights to the name Continental.

And out back on display, a period correct California license plate, circa 1955. 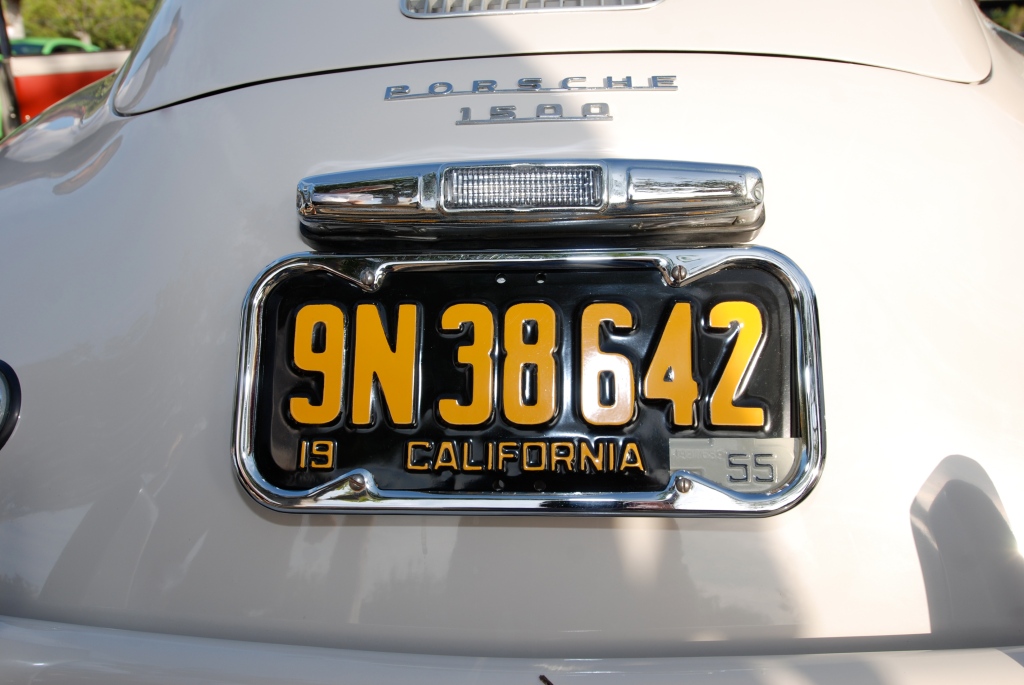 The next treasure discovered was this beautifully restored classic; a red 1963 Plymouth Sport Fury, as seen below…

and residing under the hood, a surgically clean and massive 426 Hemi motor. 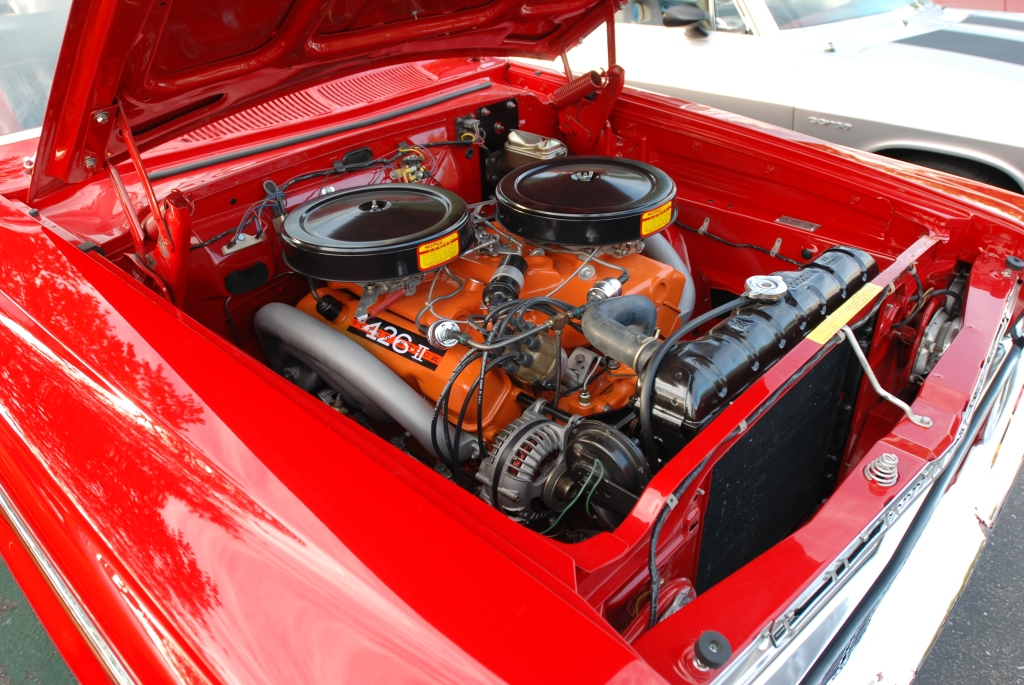 The interior had been treated with the same attention to detail as the rest of the car, and appeared showroom fresh.

While on my walk back towards Porsche row, I came across this unique example of a 1991 Porsche 964, in Grand Prix white. And upon closer inspection, I realized that this was in fact a 964 turbo.

It even wore a set of the always very cool, 3 piece modular BBS racing wheels.

Even though Porsche built the 964 from late 1989 through 1994 and the Turbo model from 19991 to 1994, it’s surprising how few of these turbo models one sees here in Southern California, when compared to the earlier 911 Carrera’s and the model 993 that immediately followed the 964. 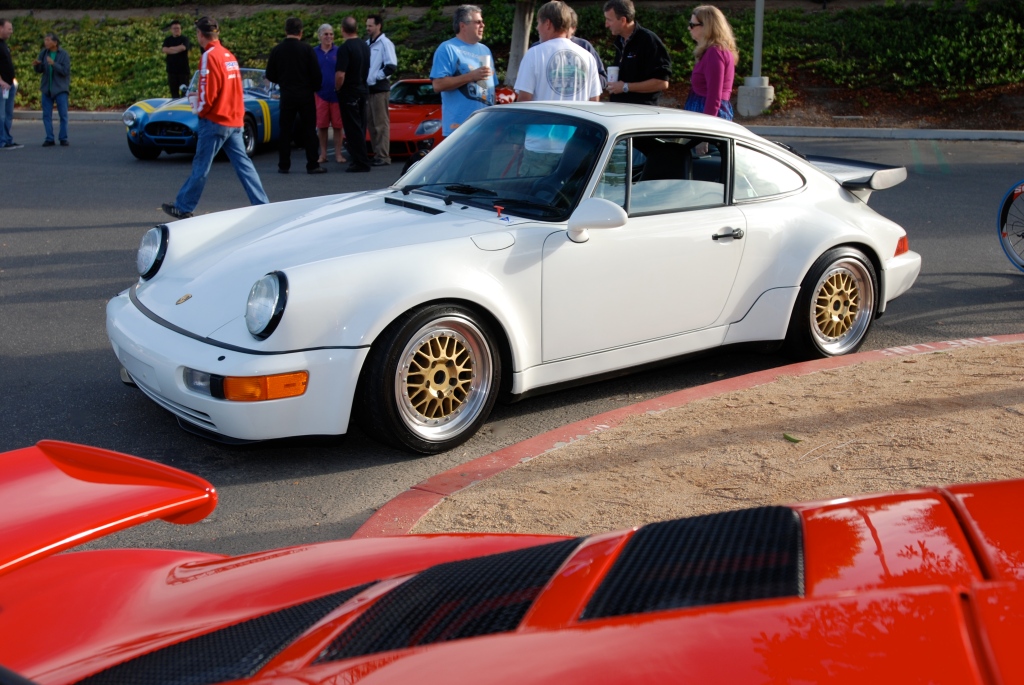 Parked towards the middle of Porsche row, (next to a non-Porsche), was this red, white and black,1966 Porsche 911 race car. With all of its collective details ( 911R front fenders, rally lights, blacked out american racing wheels, racing hood hold downs, plexiglass louvered quarter windows and the center mounted, through the hood fuel filler) this car screamed early Porsche 911. 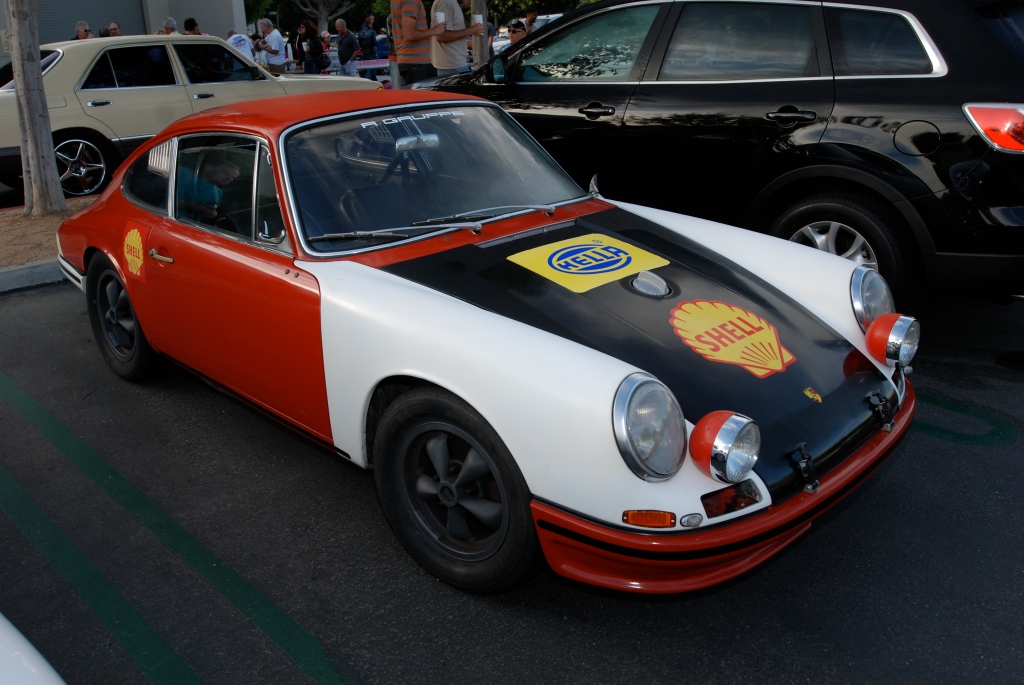 Even its license plate had a secret to reveal. Upon closer inspection, the yearly registration tags appeared like geological strata, with each colored layer revealing yet another years tag. According to the owner, this layered collection represents between 16 -18 years worth of registration. 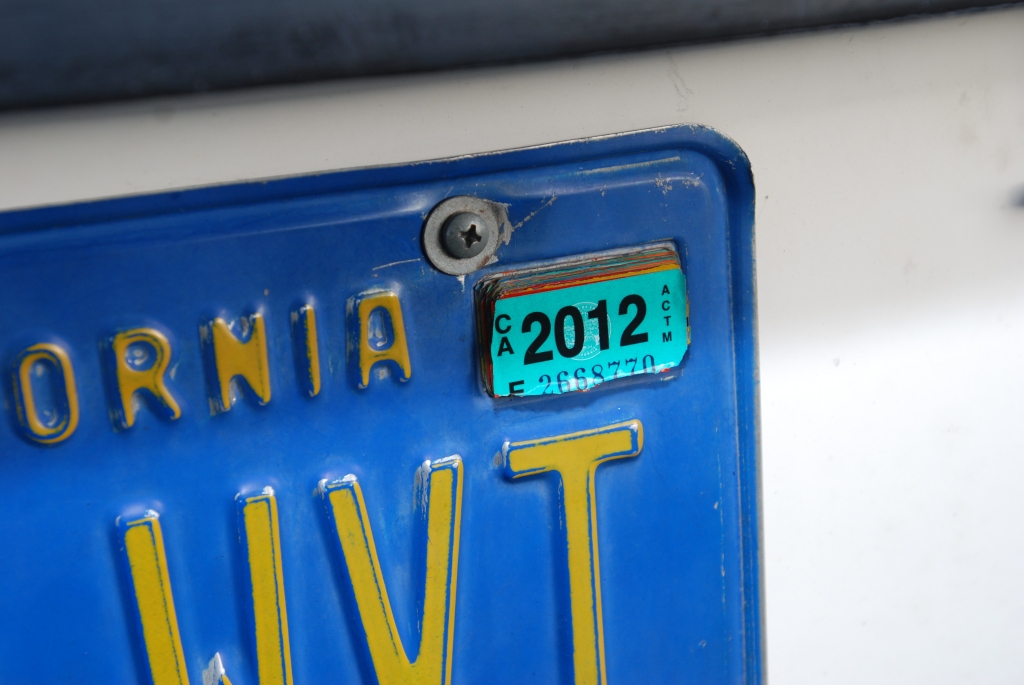 The single vehicle at the event that morning that came the closest to relic status (as seen below), was this post WWII belly tank racer, appearing like something straight out of an Indiana Jones epic. These type of vehicles were purpose-built for top speed runs on the Bonneville salt flats, and designed using parts from numerous sources. The bodies were actually crafted from military surplus sourced, auxiliary belly fuel tanks carried by fighter jets. The running gear on this particular vehicle appeared to be vintage Ford. 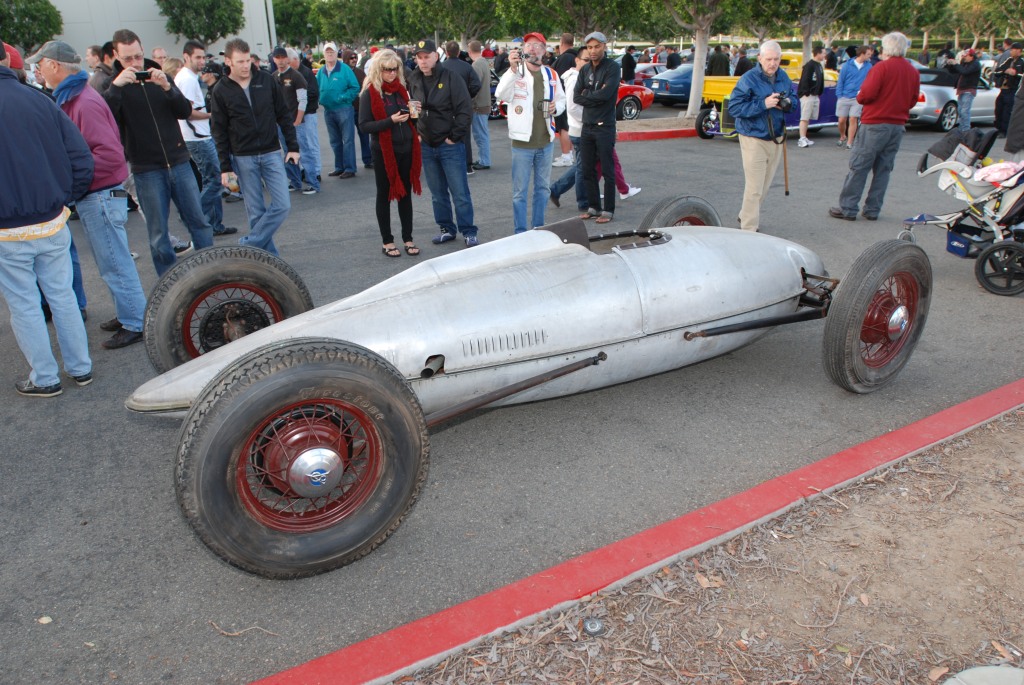 With the upper body panels removed, this racer definitely took on the look of a relic. The vehicle had the feel of a barn find, with a frame draped in the patina of age, and included weight savings measures employed through the use of drilled out gussets and brackets. Even the seat belt was a military surplus sourced piece.

Located behind the seat was the radiator, positioned as a bookend to the centrally located, flathead V8 motor with its dual carbs and side exiting exhaust. The smaller tank located between the rear of the motor and the rear axle appeared to be the fuel tank. Obviously the builders challenge was to design and capture all of these component within the confines of the outer skin. The single exception to this design criteria is the exposure of the driver helmeted head, since visibility is a critical design element.

So for anyone interested in automotive archaeology, this event is truly worth experiencing, for one never knows what treasures await discovery…