There’s something about the pre 1970s Porsche race cars that over the years have drawn me to them from a photographic and design standpoint, and the Porsche seen below is no exception.

The car in question is a 1969 908LH, Porsches winningest chassis (#908 025); one very low and sleek, built for speed streamliner, powered by a 2997cc air-cooled flat 8 motor, developing 350 horsepower. Sufficient to propel this car into the realm of 200 mph, and on this weekend, onto the memory card within my DSLR.

I first encountered this very car back in 1992 at the Monterey Historics, displayed by the Collier Collection, based out of Naples Florida. In 2009, The Rev’s Institute was founded, as an evolution of the Collier Collection, by its founder Miles Collier, with the goal of creating a venue for the further promotion of “automotive research and historical studies”. 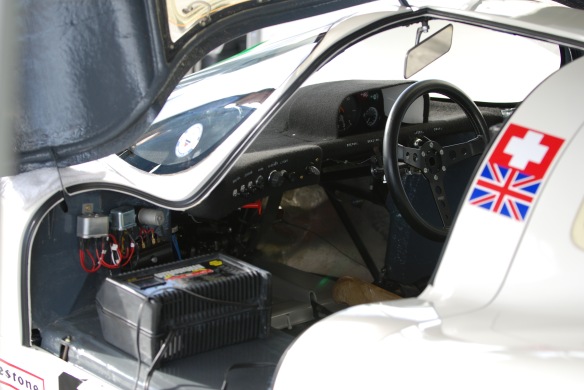 (Below) The pilot for the weekend was none other than Gunnar Jeannette (dressed in black), intently focused on securing a GoPro onto the roof of the 908LH. 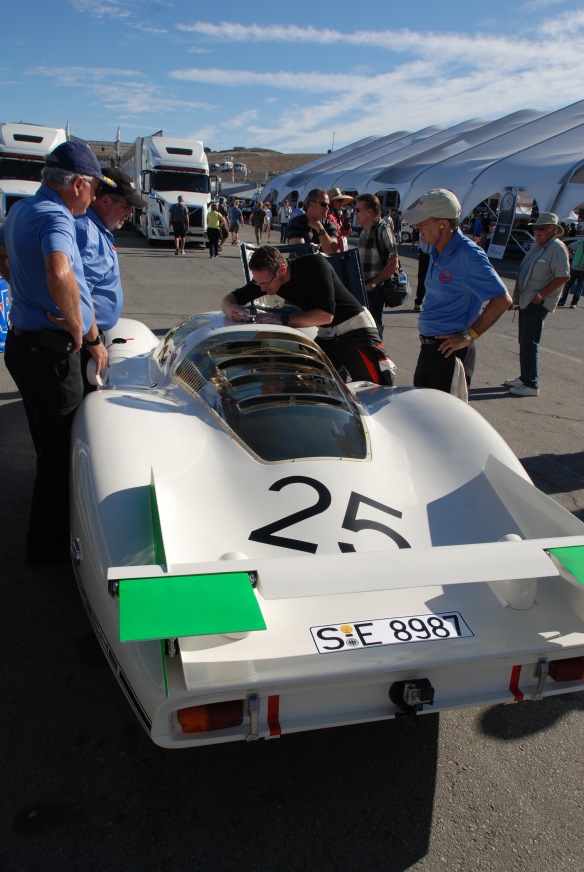 Prepped and rolling out for its track session.

Staged on pit lane (below), as a participant in Saturday afternoon’s pit lane concours.

One striking detail that I noticed was changed from the last time I saw this car, were its colored body accents. This was a very graphic way for Porsche to differentiate their individual team cars when part of a multi car team. Back in 1992, I remembered the green accents being much darker, similar to Porsche’s Irish Green. However, when I spoke with a team member from The Revs Institute about the color, he said the current color is a more accurate representation of what was applied back in 1969. This current application in addition to being matte fluorescent green, also exhibited brush strokes. So my second question was regarding the actual paint make-up, and the response confirmed my suspicions. All of the green accents were painted using water based tempera paint, similar to what’s routinely used in grade school art classes.

This paint medium approach to nose graphics appeared to have been embraced by a variety of the other Porsche race cars (from the same time period), also wearing similar matte finish graphics in a variety of period colors. Unfortunately, the one question that I failed to ask was regarding the effect of weather on this paint. If it rained, would the fluorescent green paint wash off, or would it become a visual tracer, ideal for studying the aerodynamic airflow over the car? Or would the painted accents be intact, protected by a matte clear coat finish?

So if anyone from The Revs Institute happens to read this blog post, I would appreciate some closure to my question: matte fluorescent green accents; clear coat protected or ?

All photos by the author