Once again, while the rest of the country continued to experience the effects of a stormy winter, Saturday morning  (November 10) in the early pre dawn hours here in Southern California dawned clear, but as I walked out my back door and headed towards my garage, I was greeted with a chilly embrace. Winter temperatures had finally arrived. So protected from the morning chill by my trusty jacket, I fired up the Carrera, and headed south to Cars&Coffee.

By the time I arrived in Irvine, the temperatures seemed even cooler than when I left my house. Pulling into the parking lot, I quickly looked around to see if my friends (Gene, Ryan, Dave or Jeff) had arrived, since we usually park as a group. No sign of them, so I decided to park with the regulars over on Porsche row. And that’s when I saw it; the blue, Porsche 911 GT3RS 4.0 had returned. So with camera in hand, I was off to take another look at  this truly unique car.

As noted in one of my previous posts (see link), this particular RS 4.0 was a special order car, not only for its Dark blue paint, but the graphics delete / elimination of the traditional RS 4.0 exterior stripes and Porsche text usually found on the rear wing. 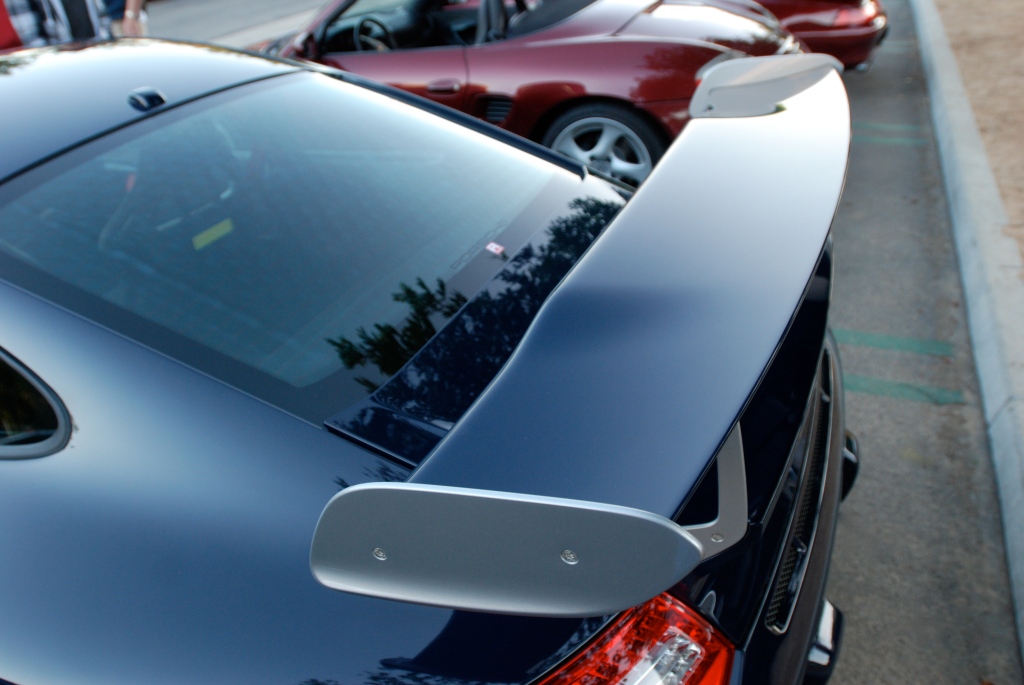 One exception made to the graphics delete option, and located out back, was the retention of the RS 4.0 badging found on the rear deck lid, just below the rear wing. 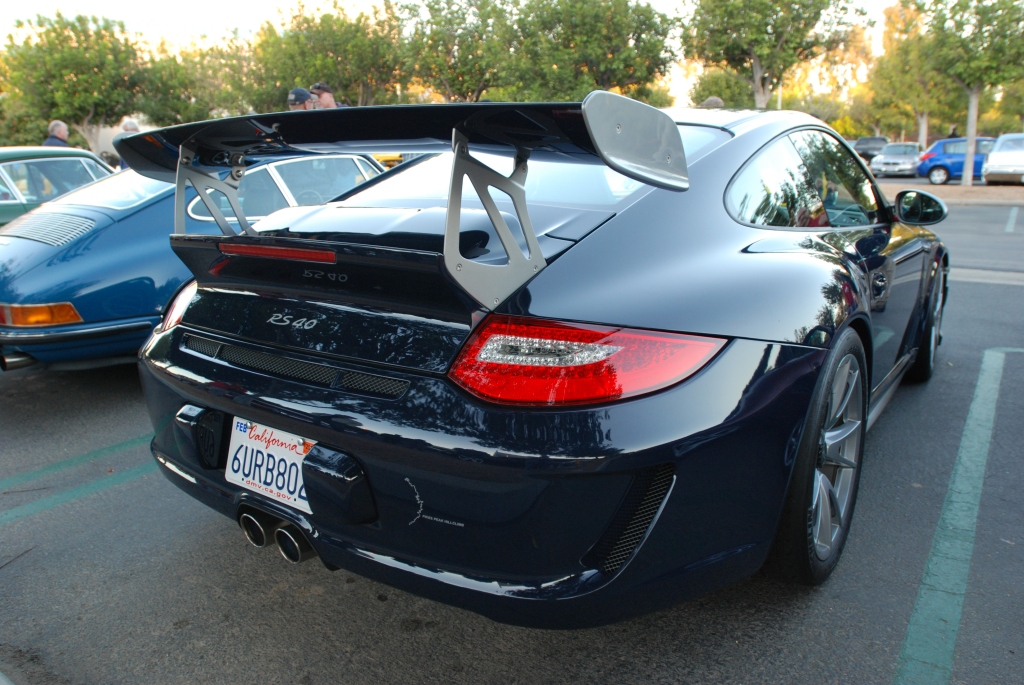 However, since the cars last appearance, there has been a subtle graphic added to the   rear valence, placed just to the right of the rear bumperette (as seen above and below). The significance of this graphic affixed to this car makes perfect sense, given the owners record of multiple class wins at Pikes Peak behind the wheel of various Porsche 911s.

Parked immediately to the left of the dark blue GT3RS 4.0’s, was this beautiful 1971 Porsche 911E, painted in another of the rare Porsche blues.

Depending upon the lighting that morning, this cars color shifted from the bright blue as seen above, to the darker,  blue – gray value as seen below. 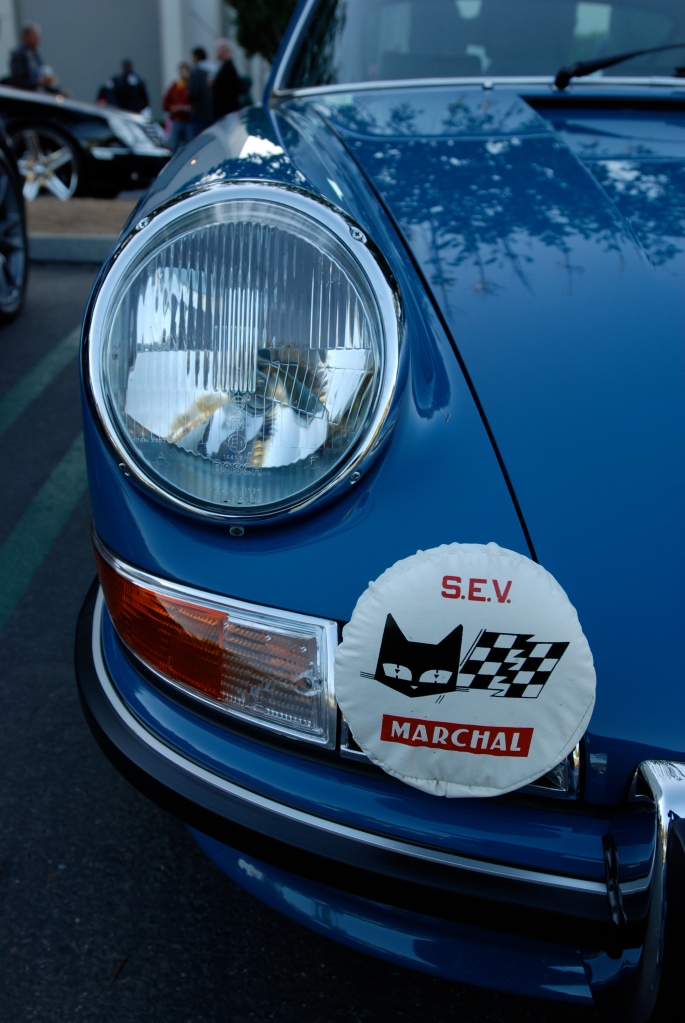 This Porsche also happened to be another car that has been absent from this event for some time, but is always rewarding to see in person. A 911E that has been beautifully restored, both inside and out. 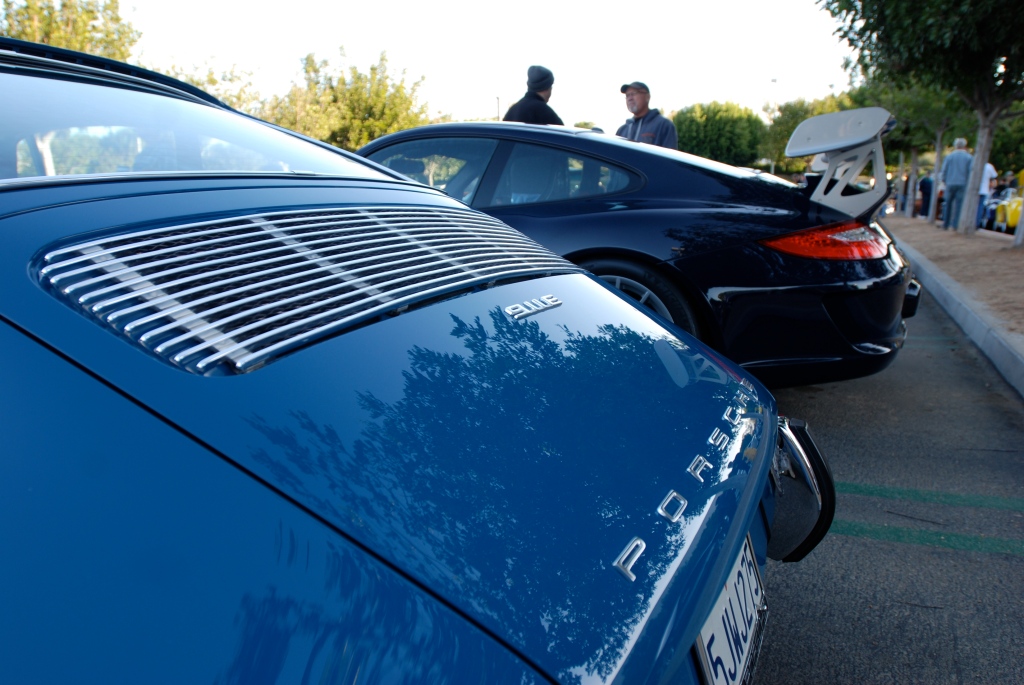 And for anyone interested in restoring an early 911, this is a car that needs to be seen in person, to fully appreciate the level and attention to detail employed on this restoration, and the results that can be achieved when done correctly.

Parked towards the opposite end of Porsche row was another unique example, this one a beautiful red1996 993 turbo, wearing a set of RUF wheels, RUF lower front spoiler/valence, and running a sport exhaust system. I learned that this car was the latest acquisition made by Truspeed Motorsports, to be added to their current “for sale” inventory.

Parked across the aisle from Porsche row, was another very cool 911; in this case a Grand Prix white, ’07/’08 vintage GT3, that has been configured for club racing.

The track set up goodies for this  GT3 also included a set of the very cool,  19″ GMG WC-GT Monoblock wheels in Charcoal gray (above and below). 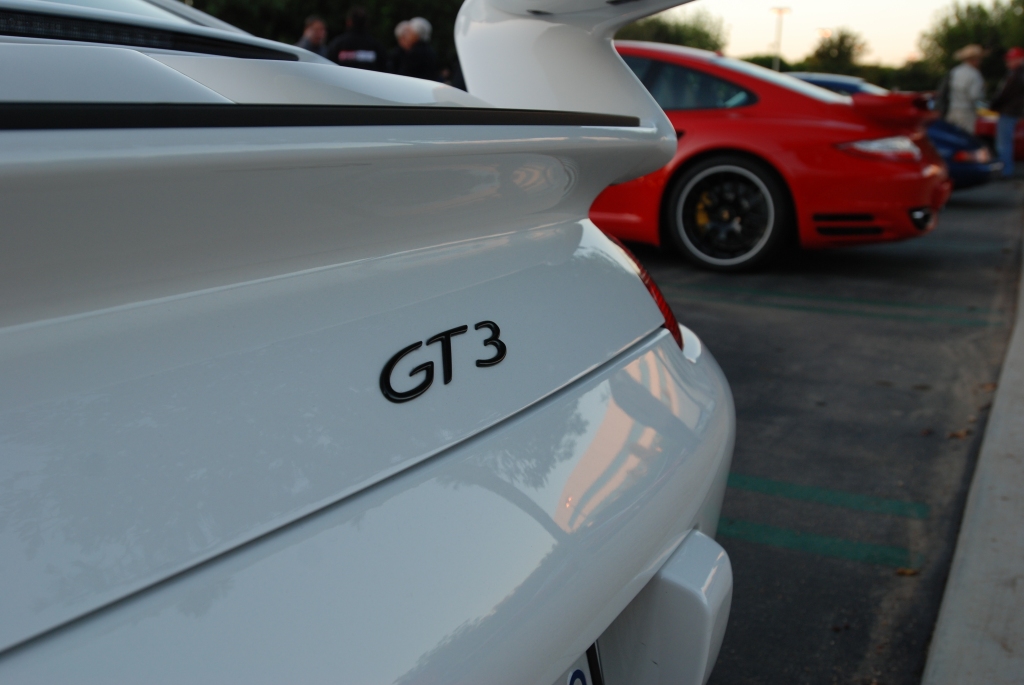 Following on the mornings apparent rot, weiss und blau Porsche theme but with a twist, was this pair of Arena Red metallic Porsches, ; a 993 turbo on the left, and to its right, a 986 Boxster. 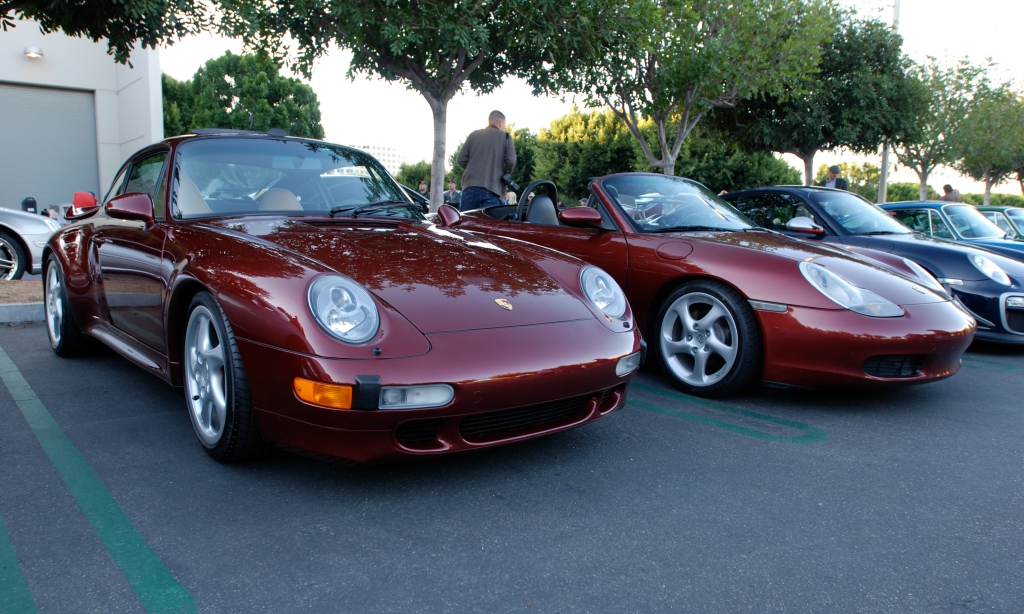 After making the rounds on Porsche row, I headed off to explore the rest of the parking lot.  Just two rows over, and parked on the outside end of the row, I encountered this modified 2011 911 GT3RS, with GMG license plate.

After taking a quick visual inventory, it became apparent that the most obvious changes made over a stock GT3RS, were to the wheels and rear wing.

Given the overall width and profile of the carbon fiber rear wing, as well as the taller, red support struts, it appeared these parts had been sourced from the Porsche Motorsports / GT3 Cup Car parts bin (above and below).

A quick inspection of the wheels revealed what appeared to be a set of the GMG, WC- GT Monoblock centerlocks, color matched to the cars red graphics and accents… 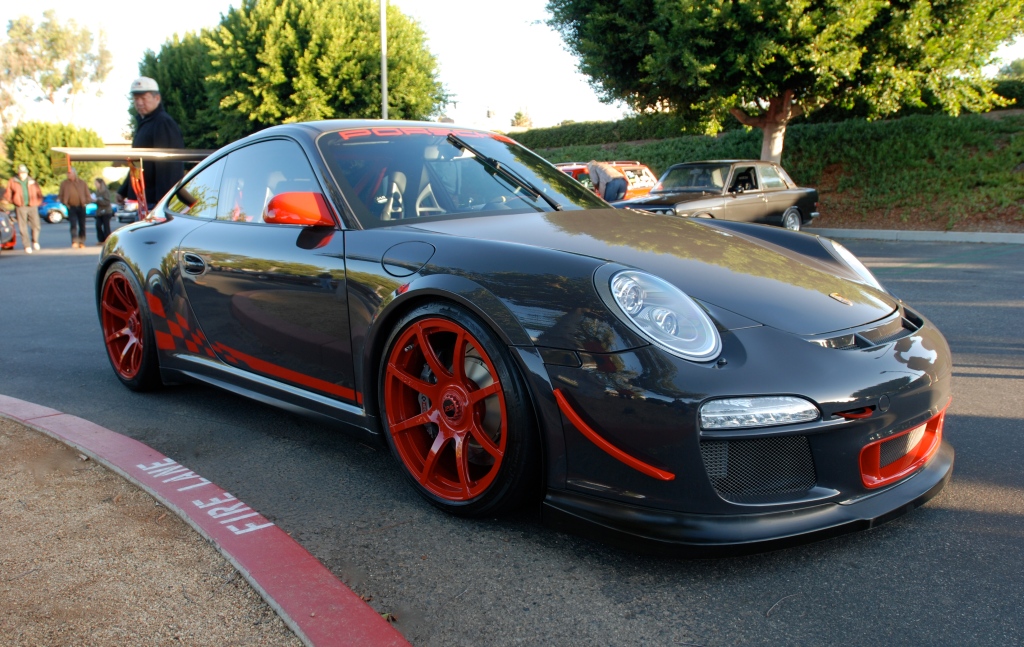 As the mornings participants began to thin, this beautiful red, Porsche type 997 GT3 was revealed, parked all by itself… 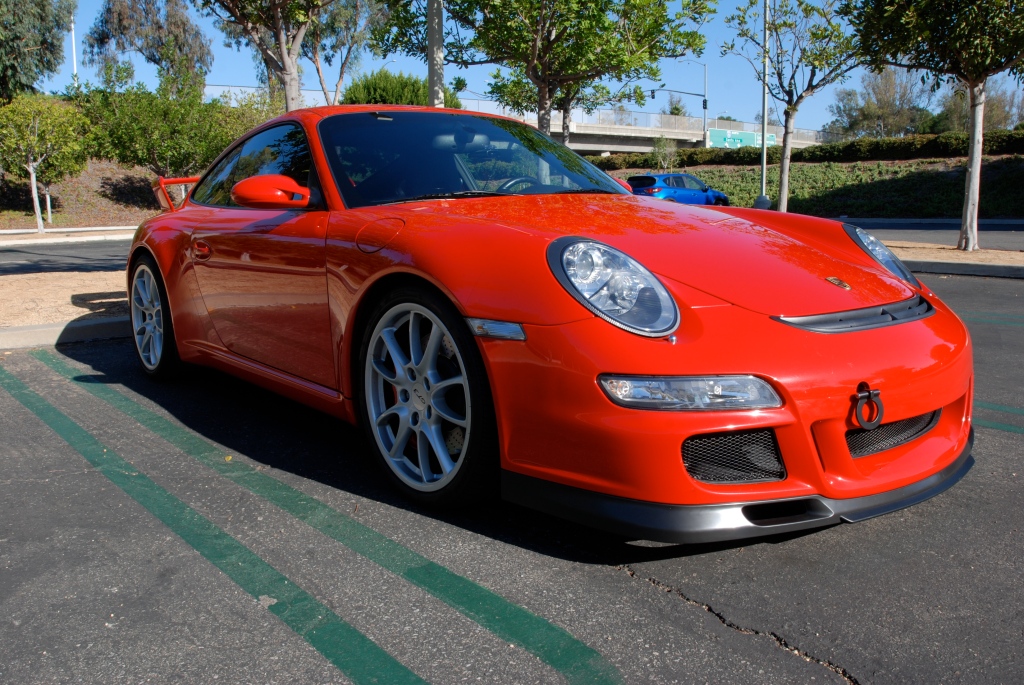 And what Porsche fan in his right mind would not stop to check out a pristine red, Porsche GT3?

Porsche’s GT3 rear wing, specific to the 2007/2008 models (below). I’ve also heard this rear wing referred to as the “taco wing”, due to the folded contours and profile of the wing, and its resemblance to a taco shell… 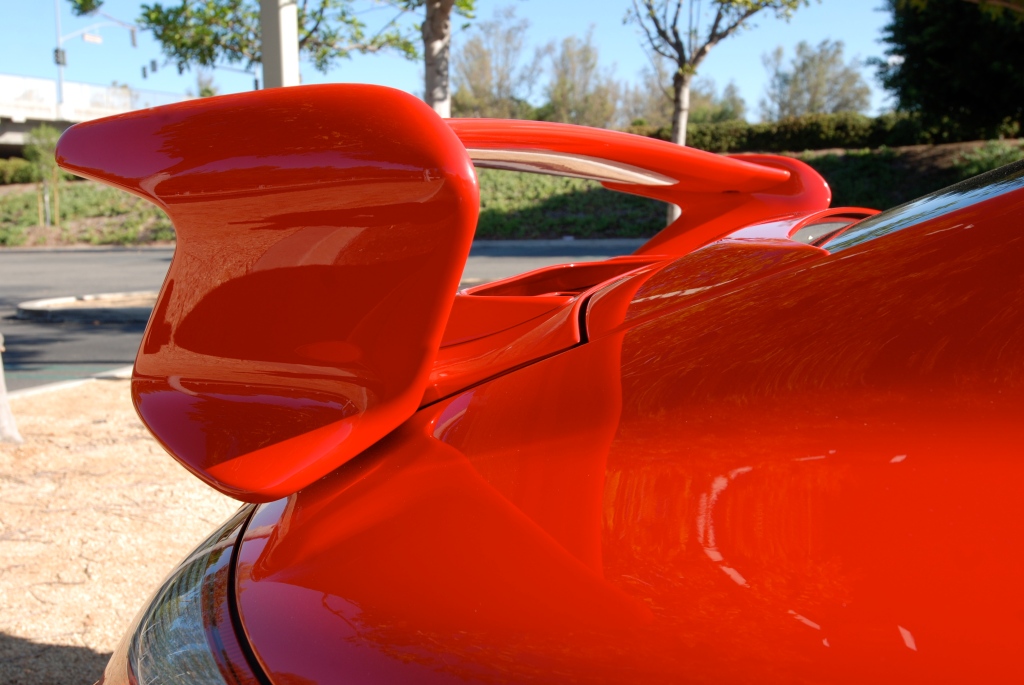 These wings also came equipped with a black “Gurney strip”, located immediately behind the dual air intake scoops, to enhance and balance the aerodynamic downforce (as seen below).

It wasn’t until I arrived back home and began looking through my photos, that I suddenly realized the mornings theme obviously had to relate to the range of Technicolor Porsches that I had been fortunate enough to photograph that morning.

2 thoughts on “Rot,Weiss und Blau: Technicolor Porsches and the return of a unique blue GT3RS 4.0…”