I woke up earlier than normal on Saturday morning, not wanting to arrive late to Cars&Coffee. For the past several weeks, southbound and northbound traffic on the 5 freeway was being redirected around a de-construction zone ( the tearing down of a single freeway overpass). Fortunately, as I approached the 5 freeway, I could see that the south bound traffic was moving, so no apparent delays for this week. As I passed beneath the overpass in question, I could see that all of the northbound structure had been removed; all that remained on the southbound side were the structural steel cross beams, and a lot of sky. Hopefully these remaining beams will be dispatched before next weekend…

Sticking to my original plan and arriving early, I was greeted by an impressive line up already assembled along Porsche row. Located mid way on the row was a car I immediately recognized; the white Porsche GT3 Cup car with red and black graphics, as raced in this years Pikes Peak International Hill Climb by frequent cars&coffee participant Jeff Zwart. 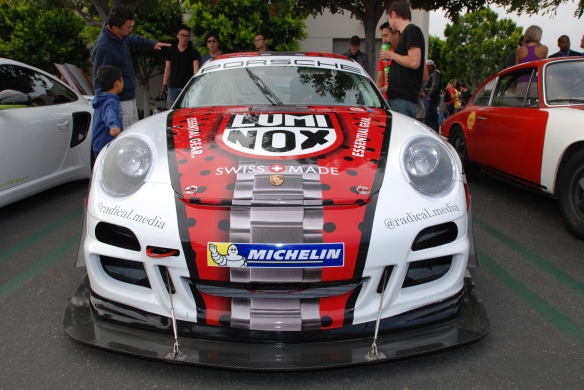 As a result of the sponsorship by Luminox, the dominant graphics element was a watch band that circled the car, from front to back, with the watch face strategically displayed on the roof of the Porsche. 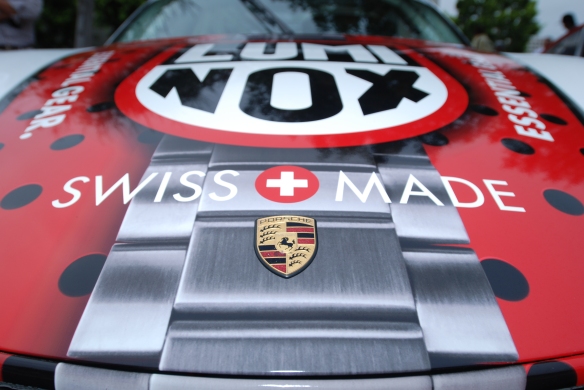 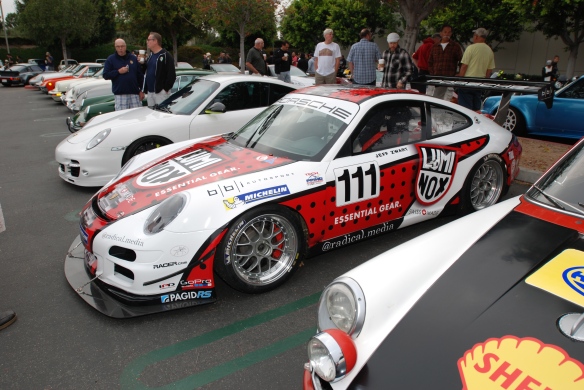 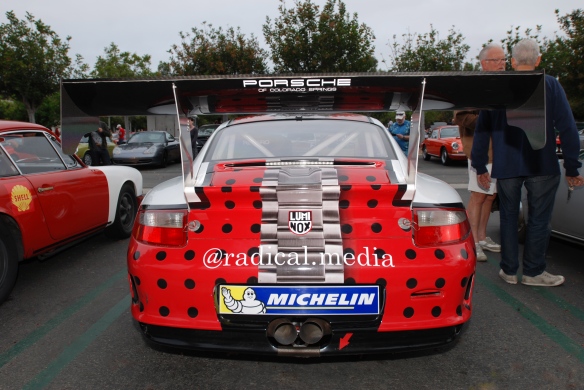 The watch face graphic predominantly displayed, afforded one the perfect line… “Excuse me, do you have the time”?  However, the more I studied the graphic, I began to wonder if the time as indicated ( 10:09:36), and seen below, held any hidden meaning. I guess I’ll have to wait until next Saturday to question Jeff about this particular detail. 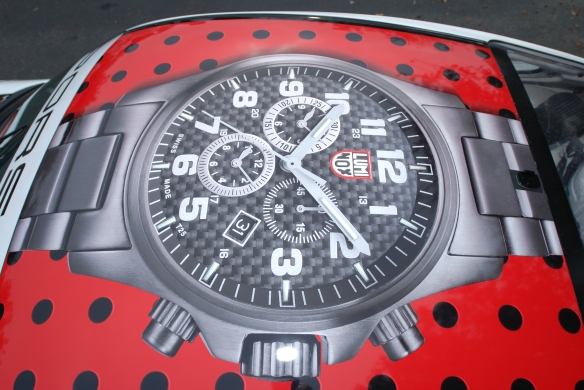 By 7:30 AM, there was a changing of the guard along Porsche row; the silver 356 that had been parked next to Jeff’s car, departed, and the empty space was quickly occupied by a white Porsche 997 Turbo S, which turned out to be an ultra rare model. 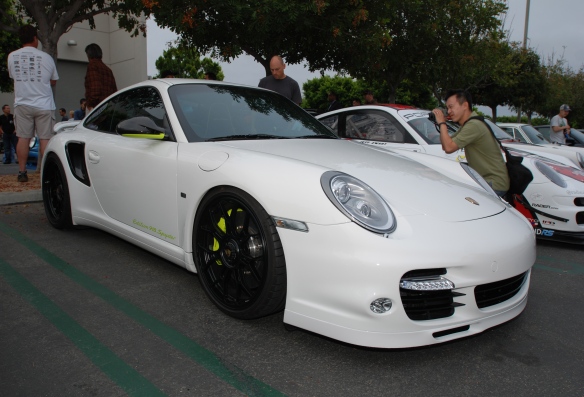 Upon closer inspection, this particular Turbo S was in fact one of Porsches rare “Edition 918 Spyder” models. These cars were to be offered for sale exclusively to the buyers of Porsches 918 Spyder super car, while they awaited final production and the subsequent delivery of their 918 Spyder. Total production of this special Turbo S edition was limited to just 918 examples, which aligned  perfectly with the limited production number for the 918 Spyder. 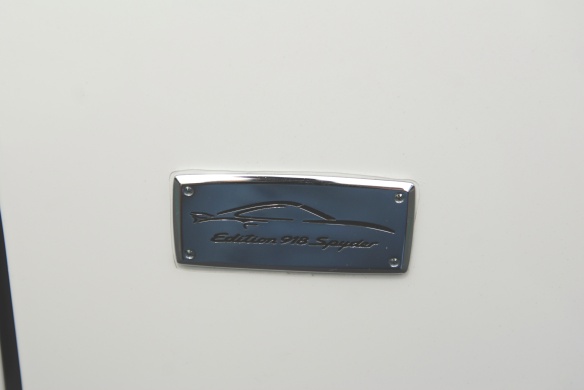 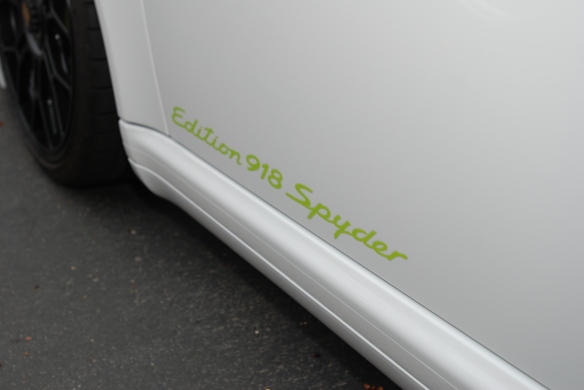 However, one of the most dominant visual clues was visible at each wheel; the acid green PCCB brake calipers peeking out from behind the black, centerlock wheels… 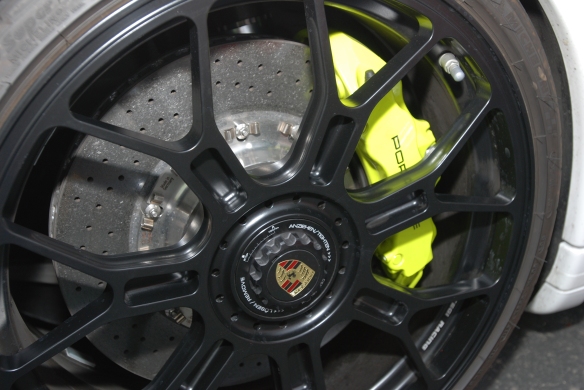 Hidden from view were several other upgrades created to separate the “Edition 918 Spyder” model from the standard Turbo S model; out back the motor had been modified to deliver 530 horsepower, while the interior received enhancements in the form of carbon fiber accents and upgraded leather surfaces, all trimmed with  acid green stitching.

Seeing this car in person gives one hope for the possibility of seeing a 918 Spyder in person in the not to distant future. According to the articles being published in many of the automotive magazines, the first production 918’s are scheduled for delivery beginning in September. So how long until we see a 918 Spyder on display in person at cars&coffee? 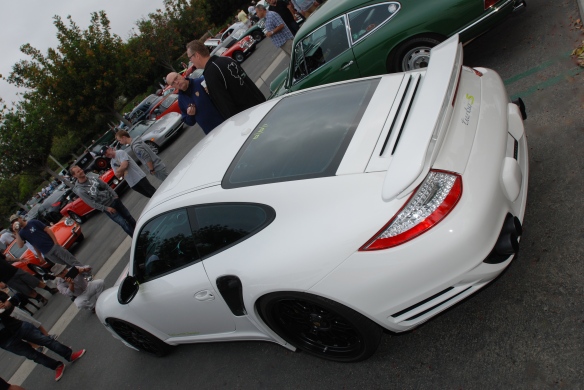 Until that time, you can check out a short film that was uploaded July 9th, highlighting one of Jeff Zwart’s 2013 pre-race, Porsche GT3 Cup car shake down runs up Pikes Peak, by clicking here…

5 thoughts on “Excuse me, do you have the time?”