I’m sorry to disappoint those of you who thought this post might be written about Formula One driver Kimi Raikkonen. Instead, this weeks title was inspired by the frigid temperatures encountered by those of us present at Cars&Coffee/Irvine, the morning of January 12, 2013. Since I began attending this event back in 2008, the morning of the 12th was by far the coldest one I’ve ever experienced. But even with the record-breaking cold temperatures being experienced throughout Southern California, the Cars&Coffee faithful still showed up in droves, albeit decked out in heavy jackets, scarves, hats, gloves and uggs.

Unfortunately the one piece of gear that I had forgotten to pack the night before were my gloves, and by 7 AM, my right hand (camera holder) was suffering from exposure. My friend Gene, who came fully prepared wearing cold weather gear, magically produced from the back of his car, an extra pair of gloves (fly fishing to be specific), that he kindly loaned me for the duration of the morning. The benefit of this type of glove is that with the finger tips removed, you can still handle your camera and make fine adjustments while retaining a sense of touch. Within a couple of minutes, my right hand and shutter finger had regained color and warmed up, allowing me to continue on my photographic quest.

One of the first cars that I observed drive into the lot by the glow of its headlights, and then settle on Porsche row, was this rare 2011 Porsche type 997 Speedster, in Pure Blue. 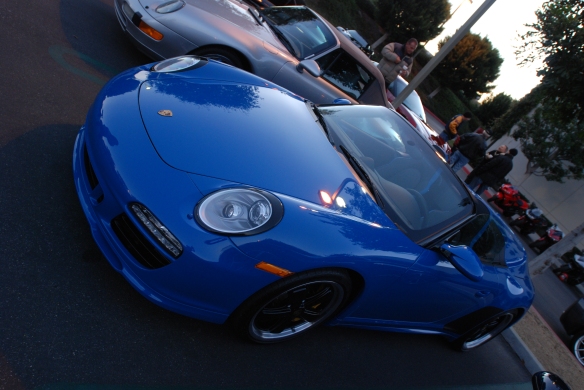 To further commemorate the origins of their original Speedster, Porsche chose to limit the production of the 2011 model to a total of only 356 examples worldwide, and restricted the available color palette to only two colors; Pure blue as shown here and Carrara white. 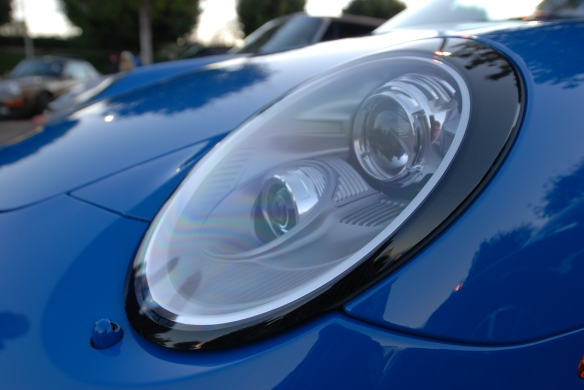 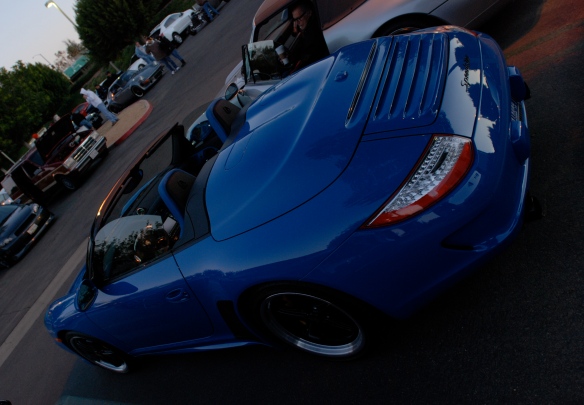 Placed on the glove box of each Speedster is the build plaque, which displays the series number of each car from the total number produced. This particular model is #154 of 356. 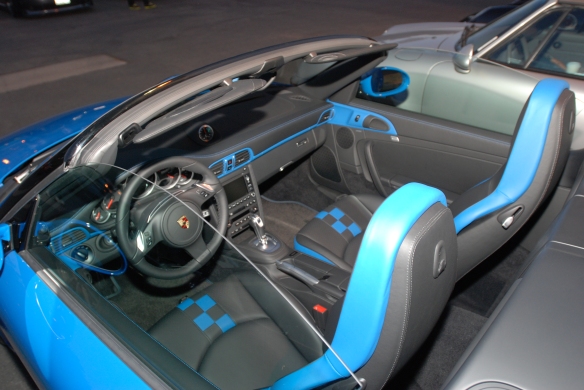 Porsche even chose the Los Angeles Auto Show back in 2010, as the venue for their first of  their two North American debuts of the 997 Speedster( the second location being Detroit). 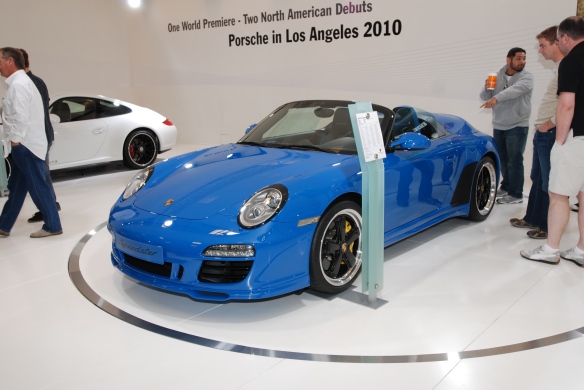 Parked immediately to the left of the 997 Speedster, was one of the newest members of the Porsche family; a 2013 type 991 Carrera, in Dark Blue metallic.

Another unique Porsche and frequent visitor to Cars&Coffee, parked just down the row from the Type 991, was this Signal Orange, 1971 914-6 GT, Factory rally car.

The owner even had a small bound book placed on the roof, documenting the history behind this unique vehicle (below).

On this particular morning, the car showed up wearing a set of standard Porsche street wheels and tires, which appeared quite skinny, when compared to its standard Porsche 5 spoke, 15″ Fuchs alloy race wheels.

Serving as a visual bookend to Porsche row, was another blue 2013 Type 991 (in Aqua Blue metallic), however this particular model was equipped with Porsche’s 2013 re-interpretation of their classic 1973 duck tail spoiler… 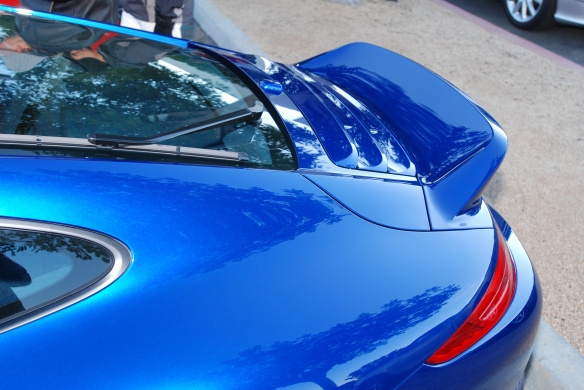 My next stop was over to the featured lot to see what hidden treasure awaited. Much to my surprise, parked amidst a group of Alfa Romeo’s was this beautiful black Ferrari 512BB, with its rear deck opened, revealing its 5 liter, flat 12 cylinder motor. 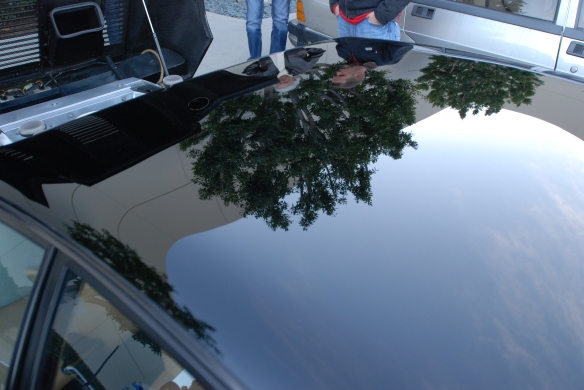 with all 12 cylinders of Ferrari magic revealed out back… including the 4 sets of triple choke Weber carburetors (which would indicate that this car is a pre 1981 model), since Ferrari switched over to fuel injection in 1981, and rebadged the car as the 512 BBi. 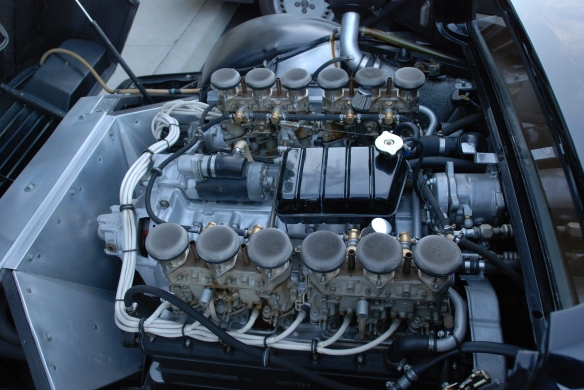 After heading back over to the main parking area, I  encountered Lotus row, however with considerably fewer cars in attendance on this morning…

Then moving down the row, and parked to the outside of the curbing , I came across one of my favorite Porsche models; a 2011 GT3, in black. 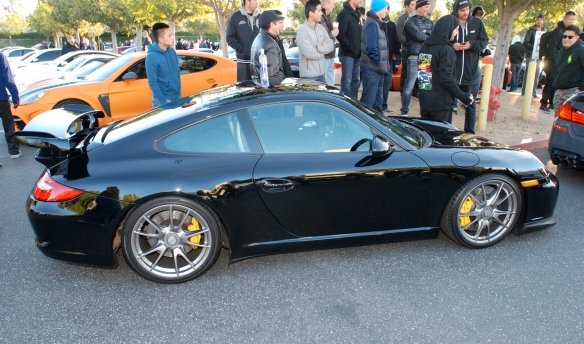 Walking around the car and checking it out, was like looking at a black, purpose-built high-speed mirror, capturing and reflecting all of its surroundings… 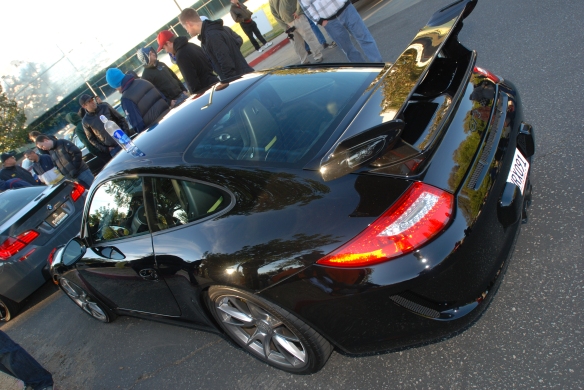 My next stop would be to the back row of the parking lot, in part to check out why a crowd had gathered. What I found was a collection of McLaren MP4-12C’s and a few select Audi R8 V-10’s thrown in for good measure. 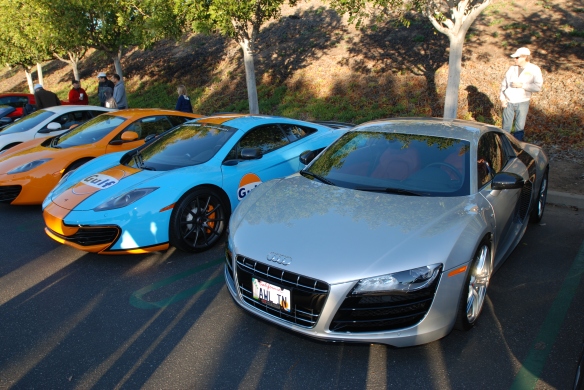 An example of the new McLaren MP4-12C spider in Graphite Grey, as seen below. 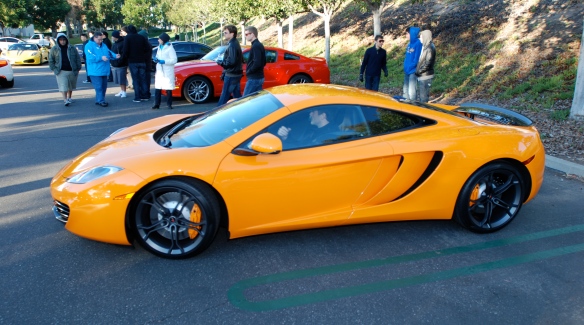 After the departure of the McLaren group, I wandered back through the lot to search for any cars that I had missed or that were late arrivals. As I approached Porsche row, I noticed that my friend Dave had opened up the rear deck lid on his slate gray, 1984 Porsche 930 turbo, revealing his new motor and its highly polished intercooler. I even had a willing subject in the background to serve as a backdrop for a quick experiment in composition…

One of the last cars I came across before packing up for the morning, was this Grand Prix white 1993 Porsche Type 964 RS America, wearing Martini racing stripes and door graphics. This car is another frequent visitor, however this was its first time with its new graphics. 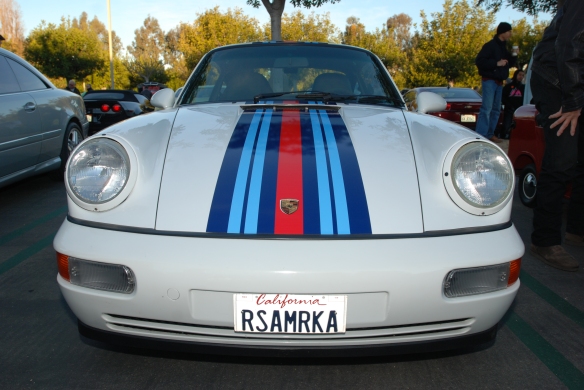 Porsche’s intention was to build this car for the 1993 model year only, however due to  increasing demand, production was extended out into early 1994. I recently learned that one of the telltale clues for differentiating between a 1993 and early 1994 model can be found by simply looking inside the car. For the late 1993 / early1994 models, Porsche chose to add the traditional rear folding jump sets, in place of the previously utilized, fixed storage bins found on all 1993 RS America models. Unfortunately, the rear seat area in this car was covered by a Martini racing beach towel, so no way to make a visual check on the rear seat configuration.

And with that the owner returned, opened the passenger door, and his dog climbed up into the back and settled on the towel. Then with a turn of the key, the engine came to life and the RS America and its occupants were gone. Now I will have to wait until the car returns, to determine whether it’s a 1993 or early 1994 model…

6 thoughts on “The Iceman cometh…”