My title for this post came from what I perceived as the theme for last weeks gathering at Cars&Coffee, and reinforced after recently hearing the song with the same title by the 1970s group Ambrosia. Saturday morning May 26th definitely had a nostalgic feel to it, given the sheer number of vintage cars that were in attendance.

This was especially true regarding the first pair of vehicles I encountered that morning; a Dove Blue Volkswagen type II transporter, parked alongside a pale yellow Porsche 356 A coupe. This setting looked like a scene straight out of the 1950s… 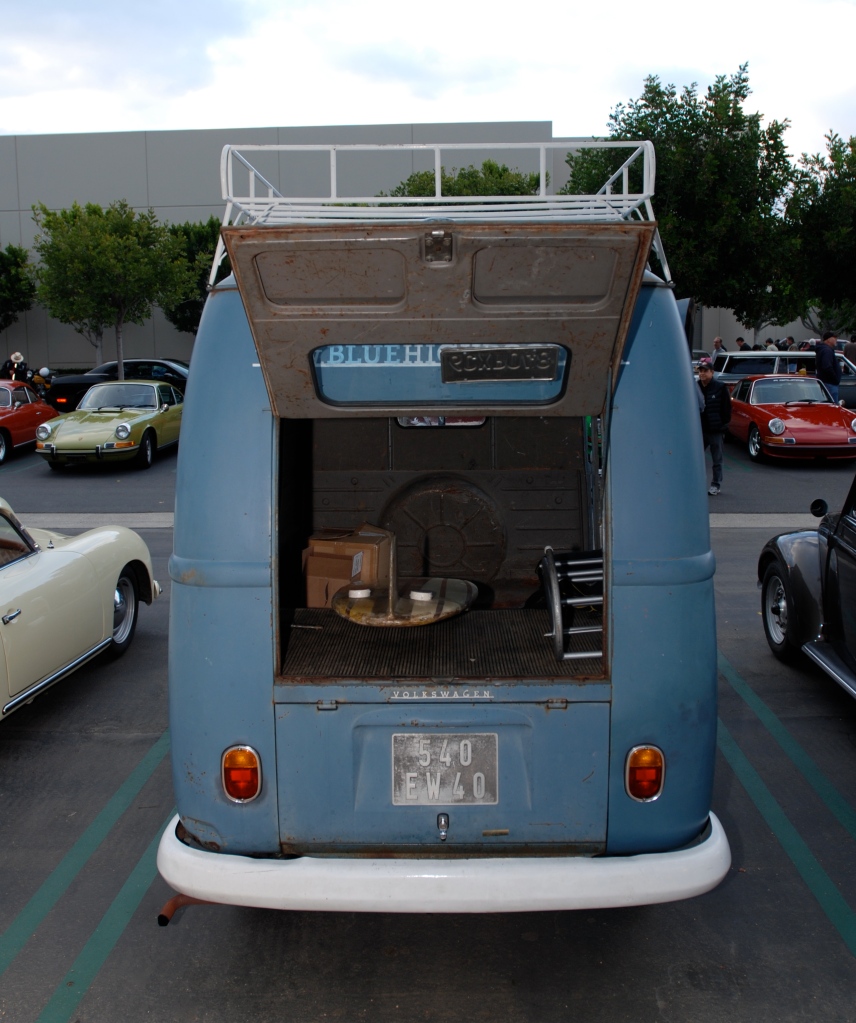 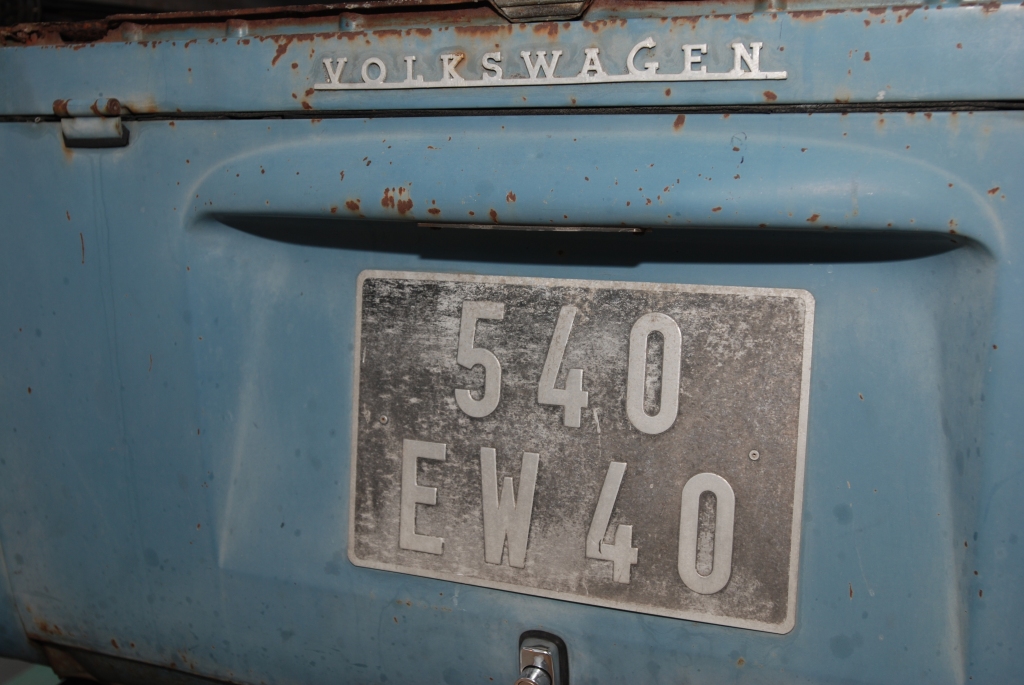 And just two cars to the west of this pairing sat another classic; a black, 1950s vintage Porsche 356 A coupe. In addition to having a flawless paint finish, the car possessed a very interesting  interior; one that was finished and detailed in green leather. Combined with its charcoal gray carpet, it made for a very interesting color combination. The green leather actually worked quite well with the black exterior, though not a color combination one normally associates with a black car.

From the outside, it was obvious that a lot of time had been spent on body work; addressing panel gaps, hours of block sanding and the laying down of a mirror like paint finish. The reflections alone were incredible, with body panels as smooth as glass, another testament to the amount of care given to the prep work. And the chrome trim installed was just as pristine as the rest of the car. 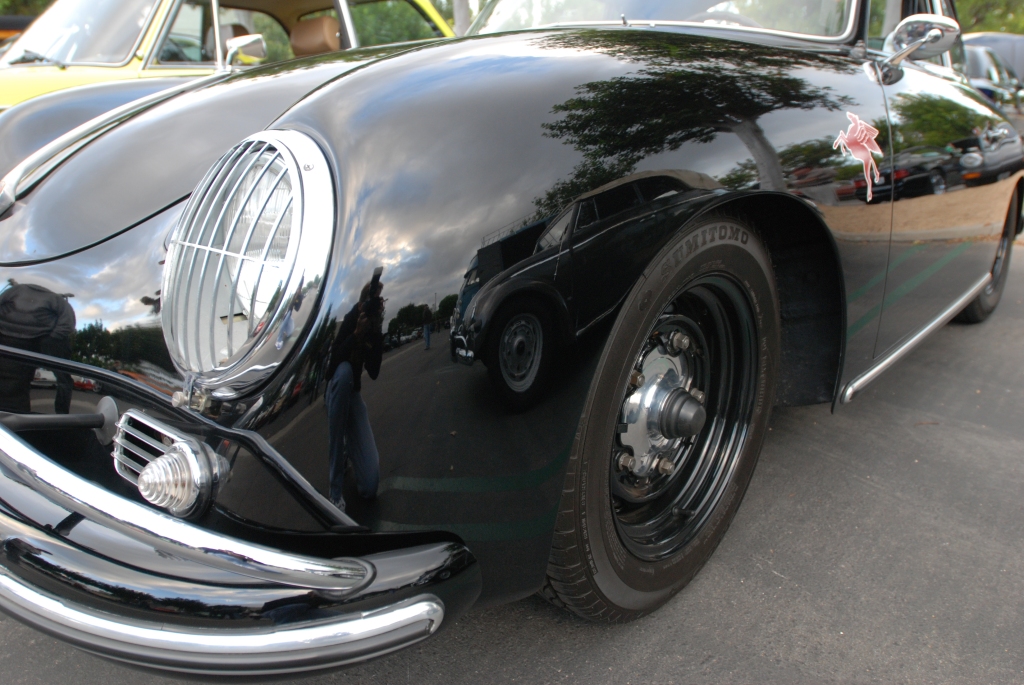 And out back, the reflections were just as amazing.

My next stop was just across the aisle at Porsche row, to check out the mornings assembled participants.

My first subject on Porsche row was this beautifully restored, orange 1970 Porsche 914-6. While I was standing at the back of the car, studying the reflections and colors visible across the rear decklid and bumper, the owner approached and suggested I take a look up front, as he had an interesting detail to share. 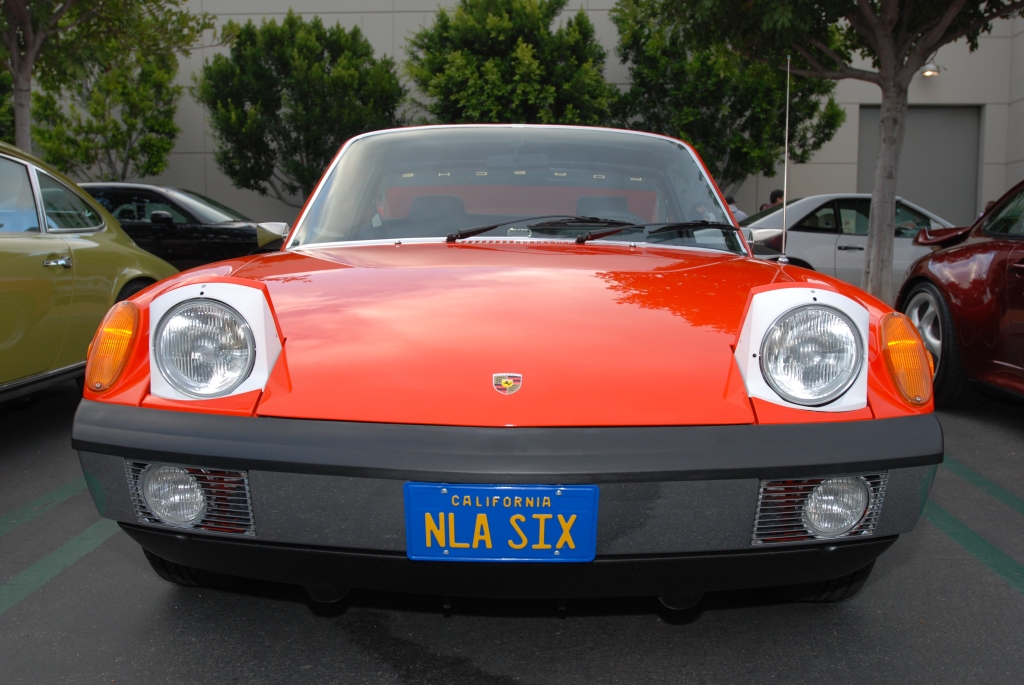 Once I was positioned up front, and with a twist of the key, the owner powered up the electrical system and up popped the headlights. It turned out that the mystery detail was the white headlight trim bezels (as seen above and below), which are incredibly rare, and as I came to learn, were only sourced from 1970 through 1972. By 1973, Porsche switched over to using only black trim bezels.  These were the first white bezels I think I had ever seen on a Porsche 914, let alone on a 914-6, but because of the meticulous concours preparation that this car has undergone, I would expect nothing less than absolute period-correctness. I also received some additional design insight into the origins of the pop-up headlights as used on the 914. Apparently Porsches original design for the 914 had the headlights located just below the bumper (where the fog lights wound up being located), but because of the United States headlight height laws, it became apparent that the original location would not work. Porsche returned to the drawing board and came up with an ingenious solution; pop up headlights. By positioning them above the bumper, at the corners of the front hood, once raised their centerline height was almost identical to that of the 1970 model year Porsche 911s. They now had a design which would be in compliance with the U.S. headlight height law.

(This same design concept would reappear, repurposed for 1977, incorporated into the design of the brand new Porsche 928).

My next stop was over at the “Featured lot”, which on this morning hosted an eclectic mix of automobiles. Tucked away in a corner parking spot, sat this burgundy over tan, “coffin nosed” 1937 Cord 812 convertible, as seen below.

From a historical standpoint, the Cord was the first American front wheel drive vehicle produced, which also included the use of an independent front suspension. Cord produced two different models over a two-year period; the model 810 in 1936, powered by a 289 cubic inch motor. 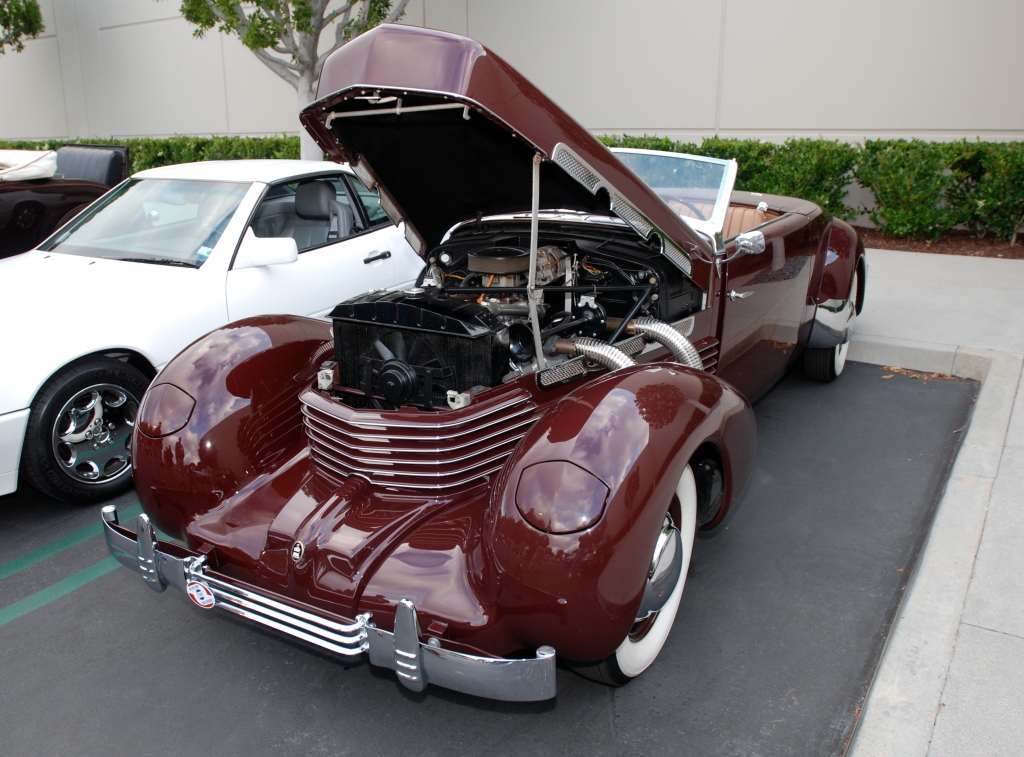 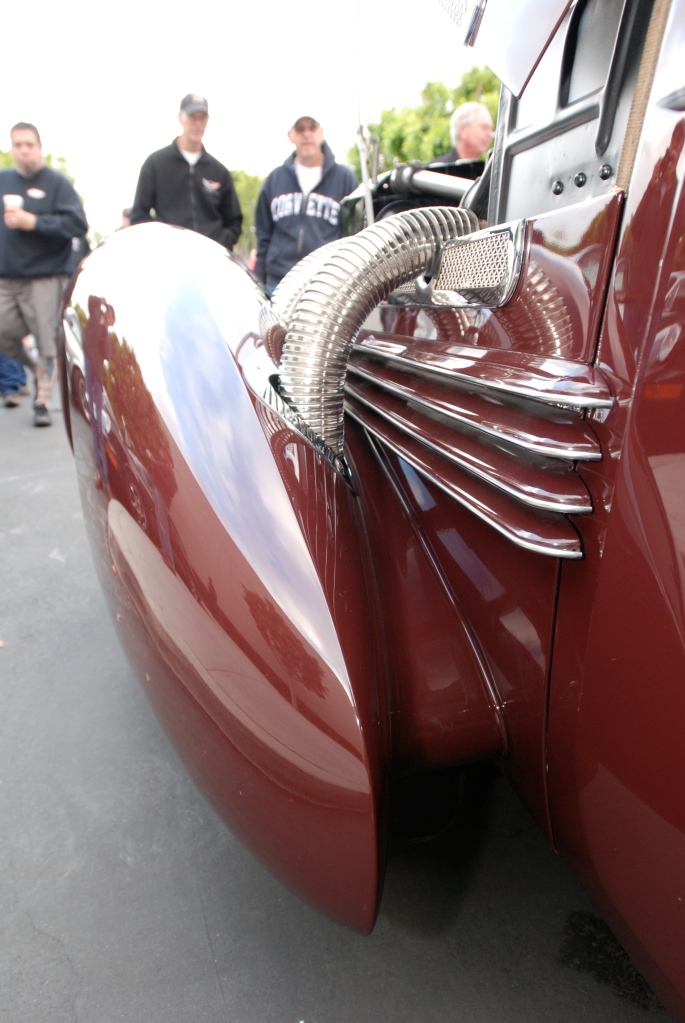 The key design feature used to identify a Cord 812 from an 810 model were the external, dual chrome plated exhaust pipes that exited out the sides of the front cowl, merging into the cars pontoon front fenders (as seen above and below). 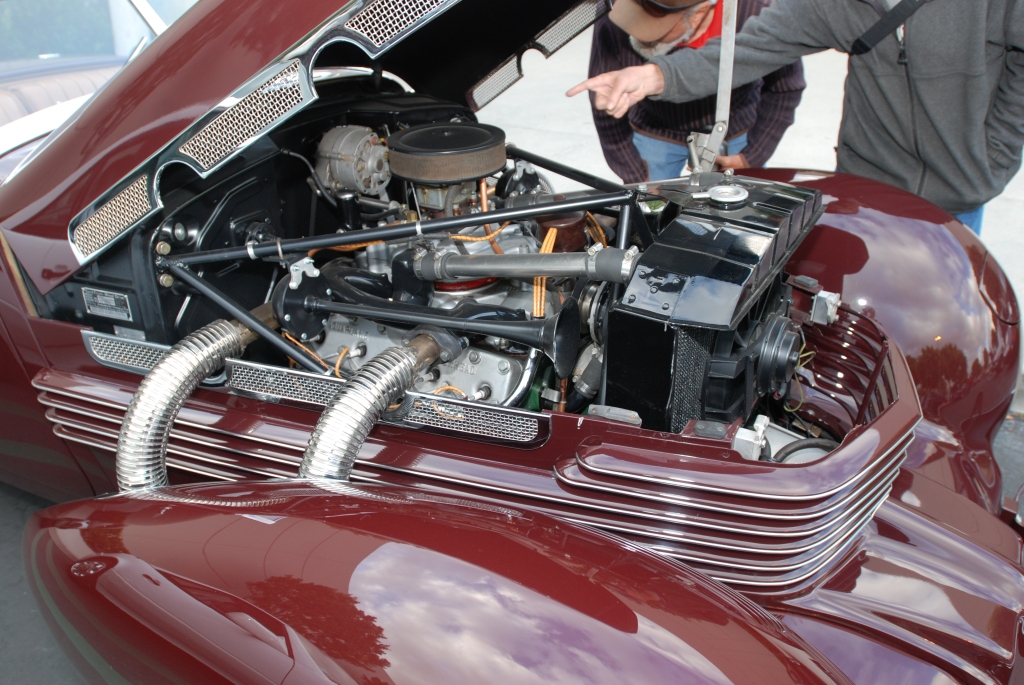 Parked just across the row and facing towards the Cord, was this beautifully prepared, modified British Racing Green Jaguar E Type roadster, one of several Jaguars on display. This car is still campaigned in vintage racing events, and on this morning was being displayed complete with a drivers helmet resting in the interior. 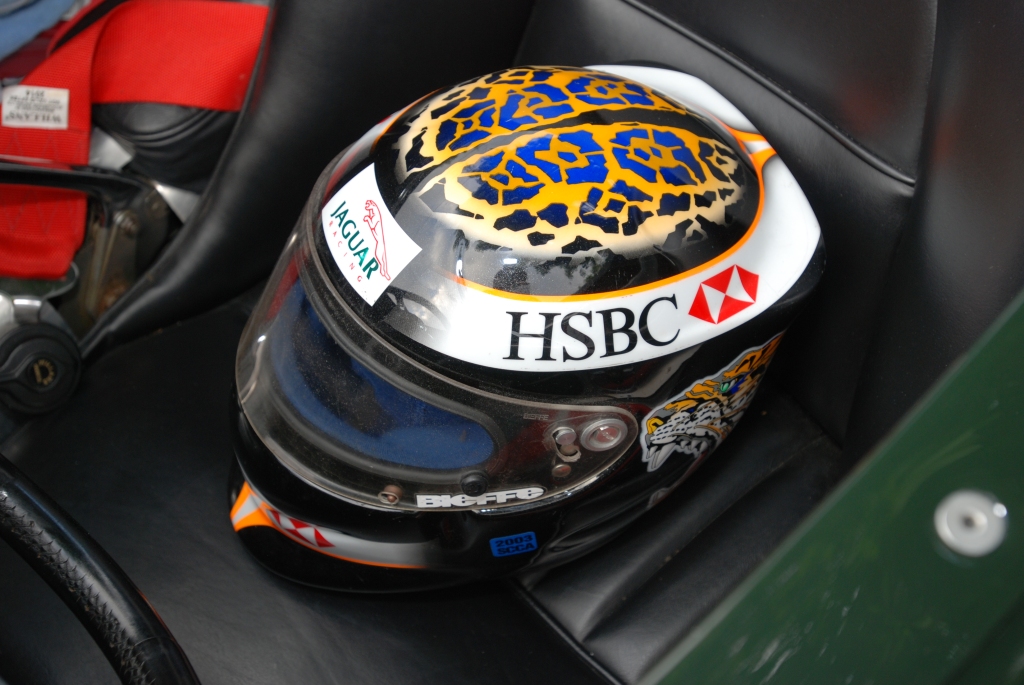 I immediately recognized this helmet design as being from Formula 1, but could not remember which driver had this as his personal design. After doing some research when I returned home, I was able to confirm that this was in fact the helmet design as worn by Eddie Irvine during his career with the Jaguar Formula 1 Racing team, during the 2002 F1 season. It was also the same helmet design Eddie Irvine wore during his participation in the 2002 United States Grand Prix.

And parked just one row behind the Jaguar, as seen below, was this beautifully restored yet slightly modified, early 1970’s vintage Datsun 240 Z (produced well before the rebranding of the marque, which saw the name change to Nissan). 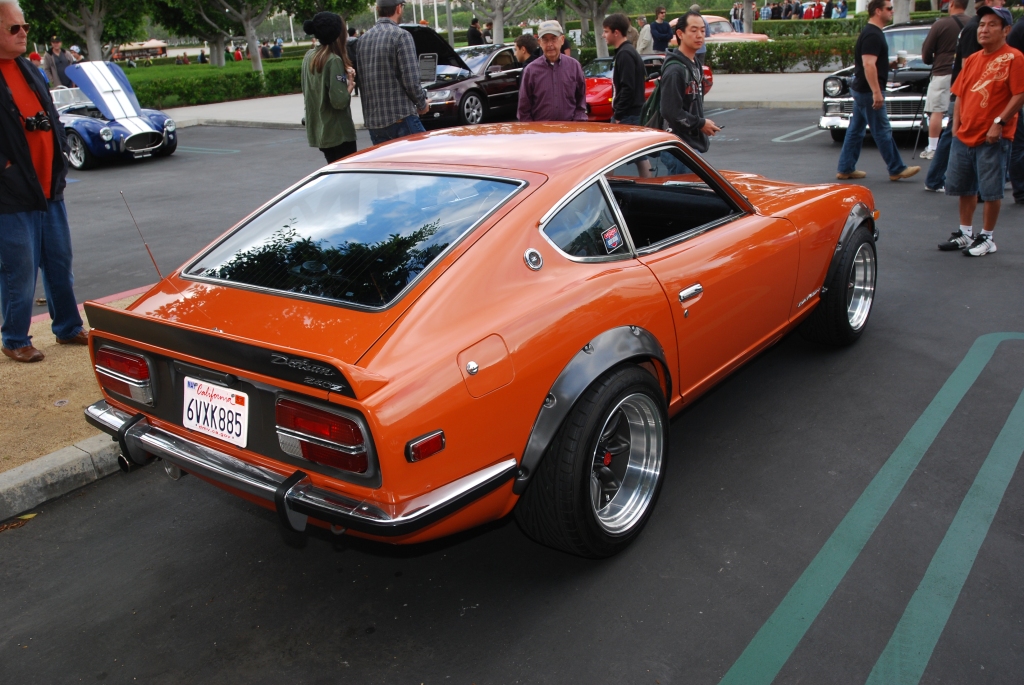 Back over at the main lot, cars had already begun leaving, but were quickly being replaced by cars that had been queued up and waiting to enter the event. I had observed  these changes first hand, especially since the pale yellow Porsche 356 A coupe that had been parked next to the Dove blue VW Type II transporter was now gone. However, in its place was a black Porsche 997 turbo cabriolet.

This also presented another interesting visual comparison; old and new models displayed side by side, providing a clear example of  changes in automotive design philosophy, technology and vehicle evolution. 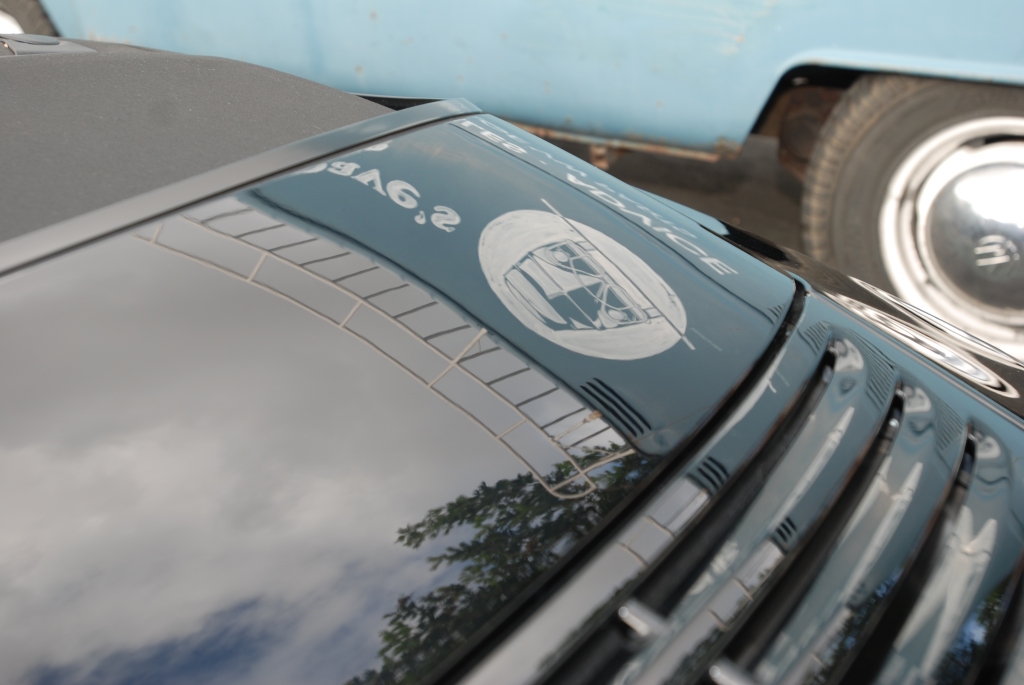 This pairing also made for some very interesting visual imagery: reflections cast across the flanks of the turbo Porsches bodywork…

As I was getting ready to leave the event, I hard a rumor that the following weekends event (on Saturday June 2), would be a tribute to Mercedes-Benz. My immediate thoughts raced at the possibility of another gathering of 300SL gullwings, SL’s, SLR’s and more. Little did I know the surprises that awaited… Please stay tuned for my next post with coverage from another truly amazing event.