What if Porsche had continued to further refine the design of the their 550 Spyder?  And what would it have looked like if fully developed as a 550 coupe?

Well. below lies the answer; the Vintech P-550 Tribute. 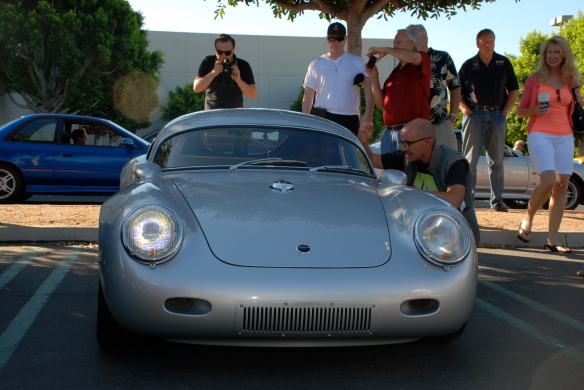 The car (as seen above and below), is a one-off prototype conceived and built by the French firm  Vintech; a company that specializes in the fabrication of prototype vehicles for the automotive industry. The Vintech P-550 tribute was created as an independent, in-house project, to serve as a showcase for their design and fabrication talents, along with their expertise and abilities to creatively manipulate carbon fiber.

Several weeks previous to its showing at Cars&Coffee, the car made its world debut in Monterey,California at The Quail Motorsports Gathering, held on August 17, 2012.

Not only is the entire body created from carbon fiber, but so is the fuel tank, front hood, gull-wing doors, rear deck lid, bulkhead, rear strut bar and the engine fan shroud. The attention to detail is incredible, and even more impressive when one realizes that the entire body is carbon fiber and not aluminum. And its flawless silver paint finish was just the right icing for this cake…

An example of the very cool Porsche wheels, machined and further customized by Vintech (above). 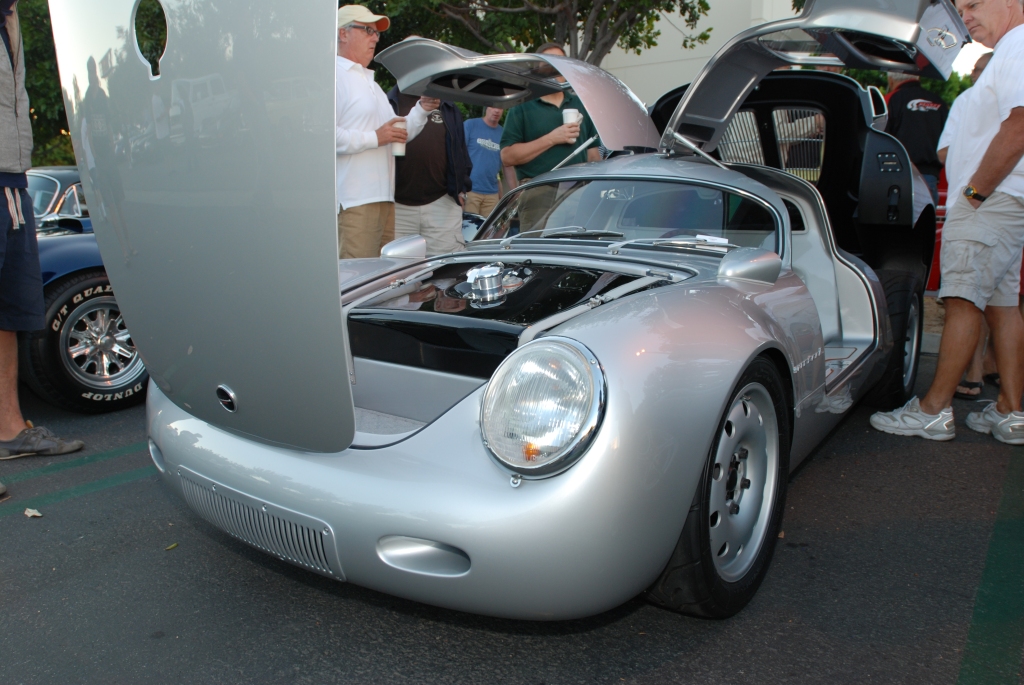 One of the subtle design details found up front, on the underside of the hood, was the masking off of select, molded in recesses, which when viewed up close, reveal the hoods true nature; black carbon fiber, contrasted against the beautiful silver paint finish. And all of these details were captured and reflected in the carbon fiber fuel tank (as seen below). 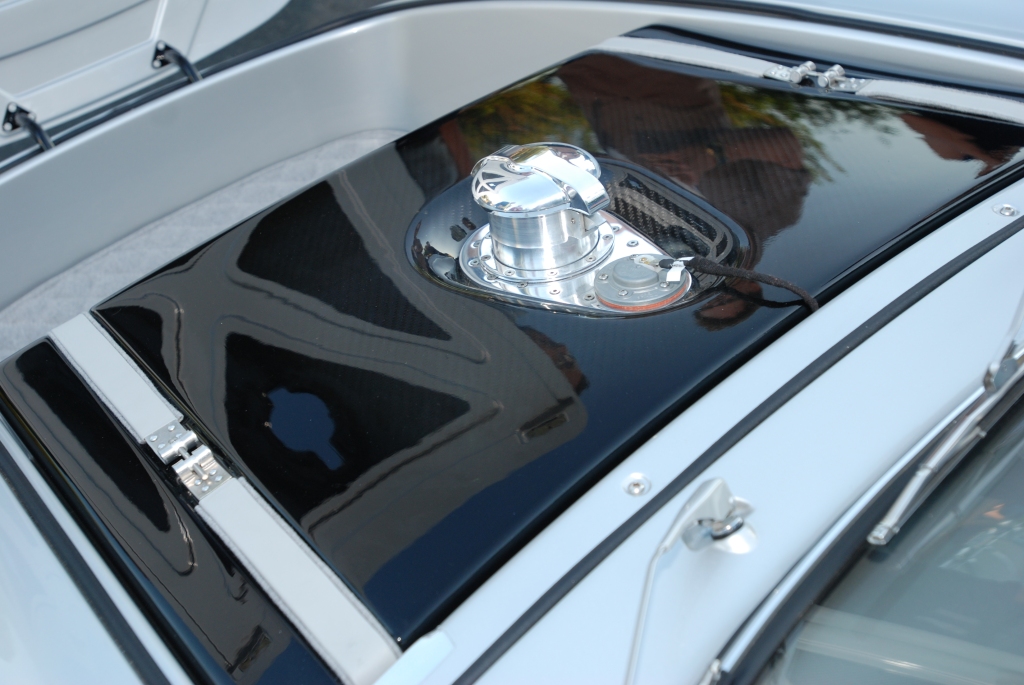 As expected, the same high level of detail found on the exterior was carried over and applied to the interior.

Even the gull-wing doors are a work of art, from their seamless carbon fiber construction, to the upholstered inner door cavities, leather pull straps and the sliding plexiglass side windows. Anchoring each door is a hinge mechanism designed as sculpture; each hinge appears to have been carved from billet stock and then highly polished, and integrated into the door and roof structure (as seen below)… 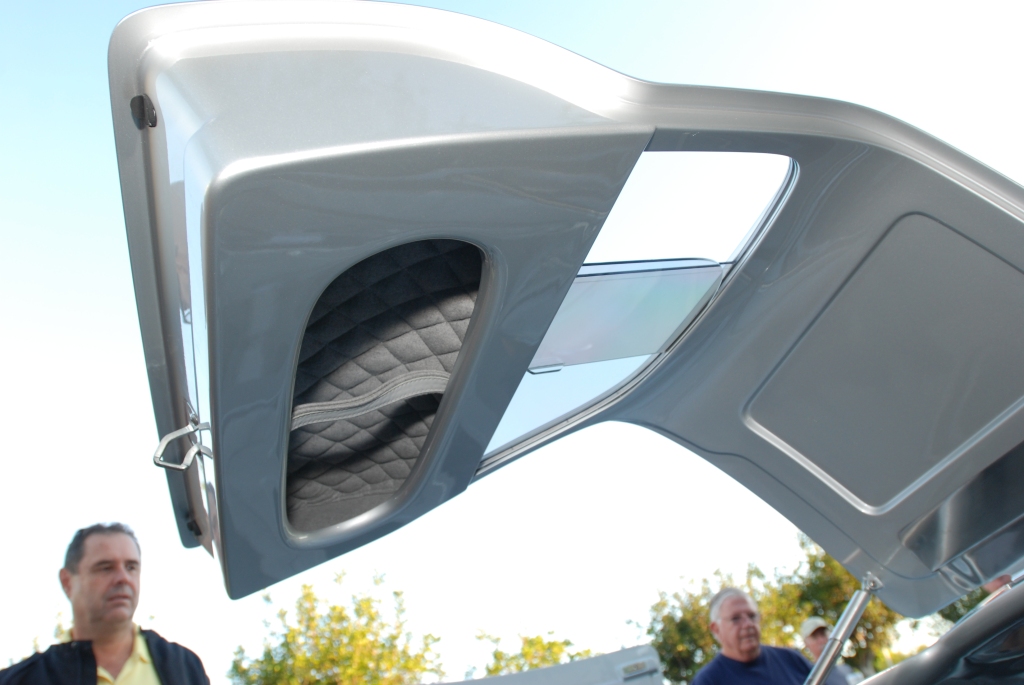 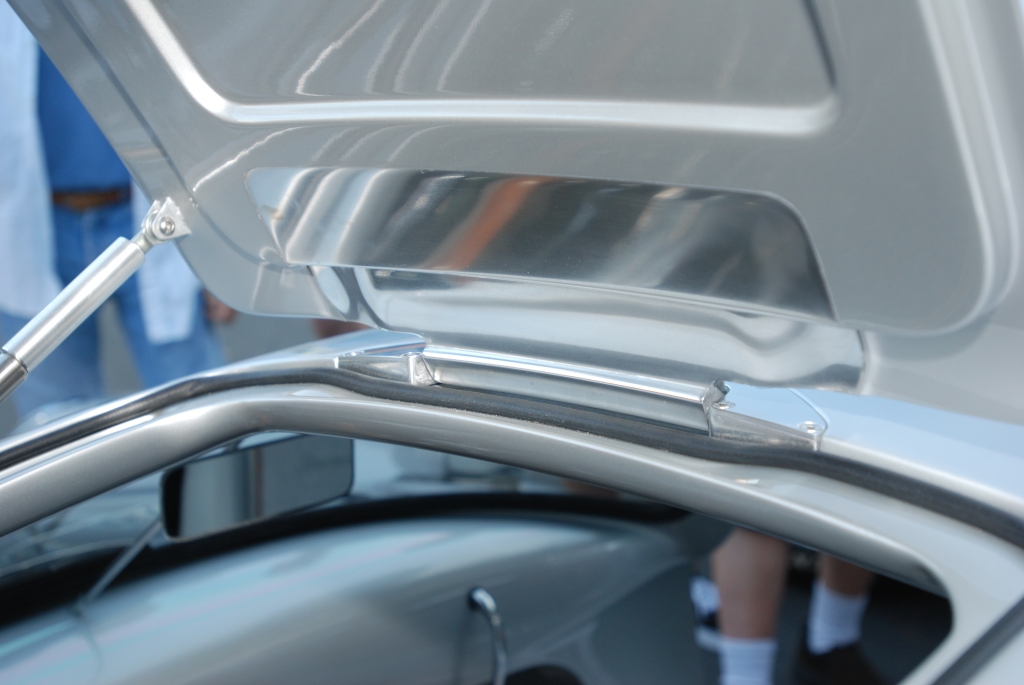 The flush fitting, polished metal gull-wing door hinges, nestled into the top of the P-550s roof. 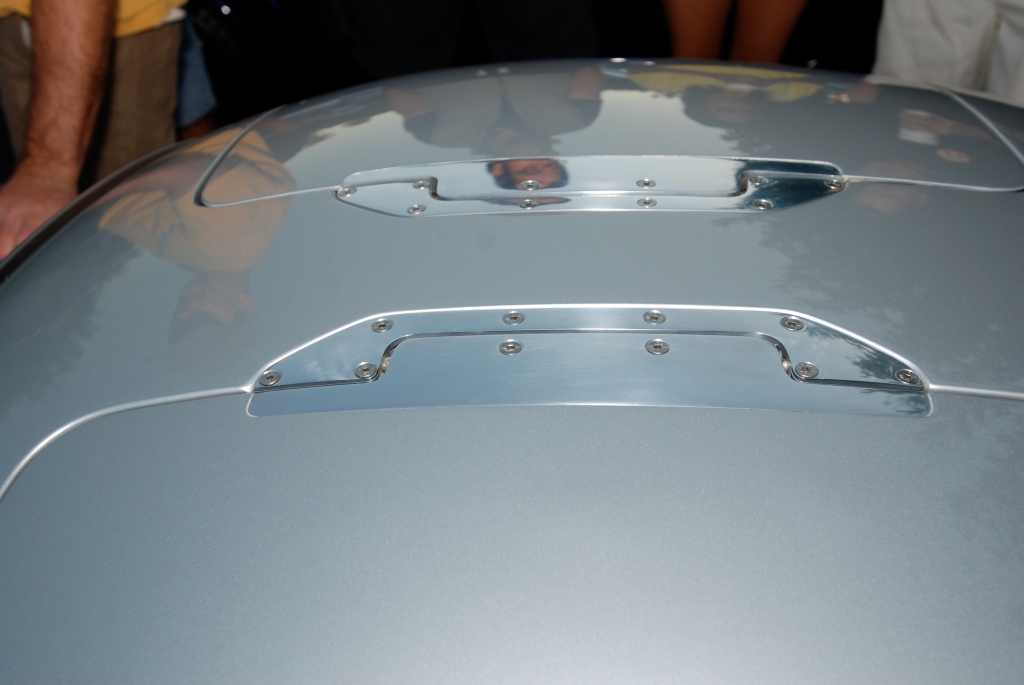 Mounted out back (as seen below), is the custom-built 3.0 liter, four-cylinder motor (manufactured to Vintech specifications), breathing through a pair of dual, double throated Weber carburetors. Power is directed to the rear wheels through a Porsche type 915, 5 speed transmission. 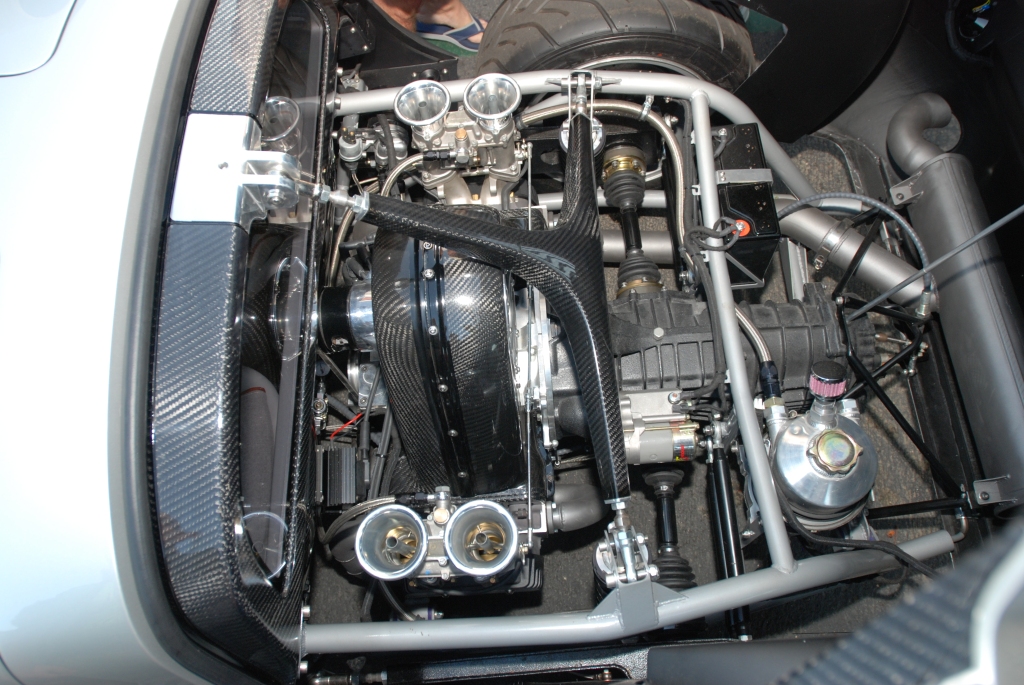 The beautifully crafted, flush mounted dual rear deck grills (above and below). 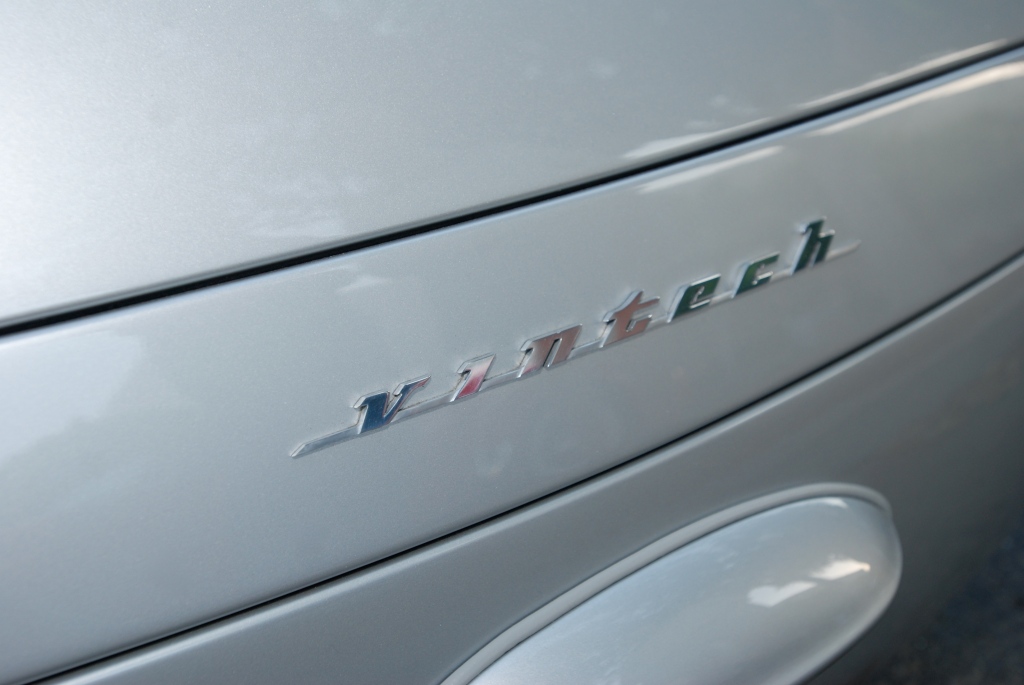 More automotive jewelry; the polished metal, air intake trim found on each of the rear deck air intake scoops (below).

The polished metal venturi, mounted atop the dual, double throated Weber carburetors (above and below).

Strategically placed within the car reside a pair of custom, spyder style sport seats; each revealing a glimpse of exposed, brushed and cross-drilled aluminum frame, clad in light gray leather, accented by a darker gray fabric center, and trimmed by terra-cotta red piping. Even the side sills were detailed by a pair of recessed, light gray leather inset panels, also trimmed with the terra-cotta red piping ( below). 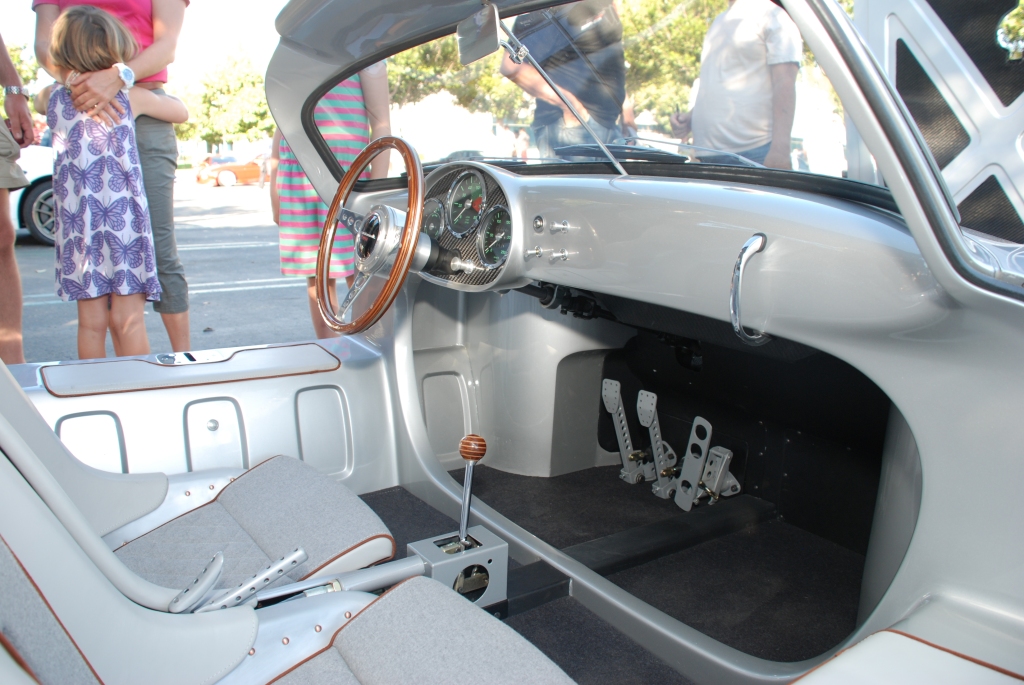 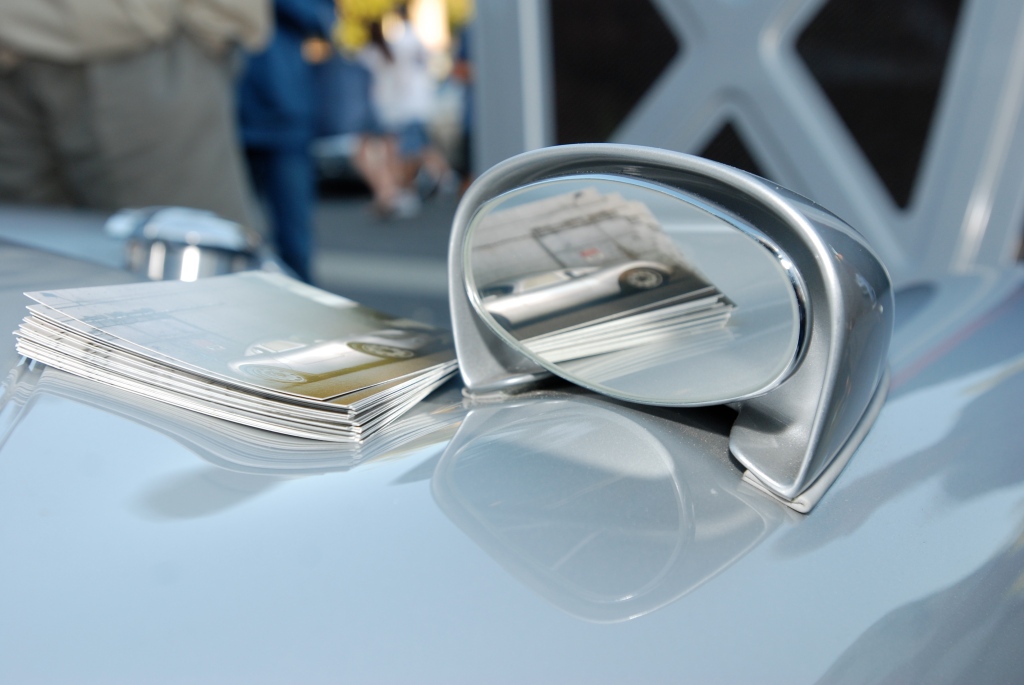 With the mornings event winding down, the caretakers from Vintech began the process of closing and securing the rear deck, front hood, and doors (below). 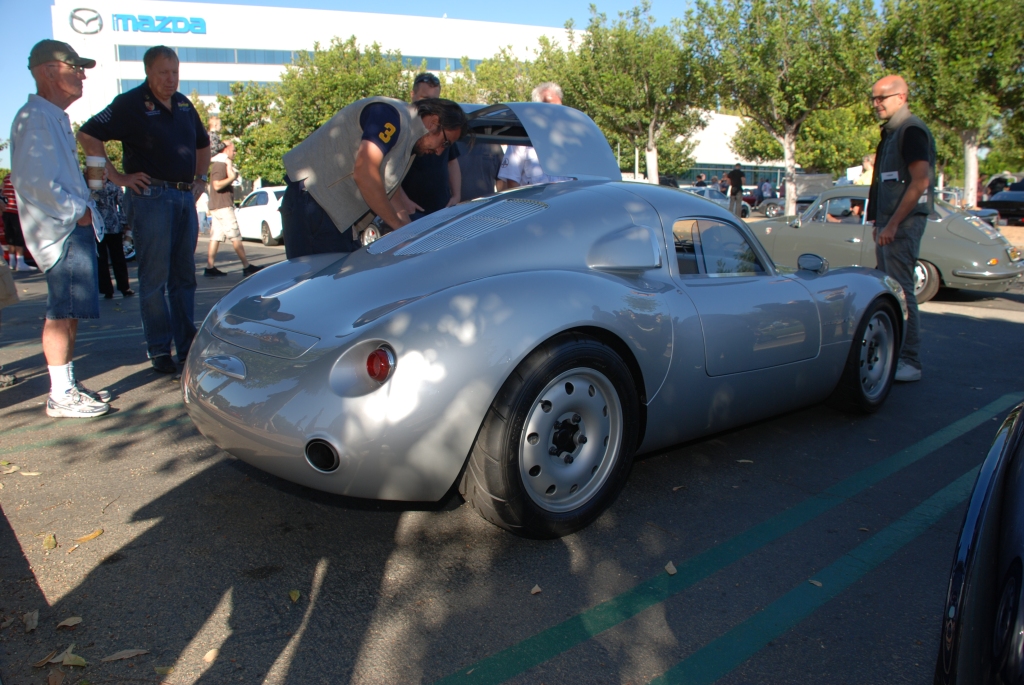 All buttoned up and read to go…

With the motor warmed up, and a blip of the throttle, the Vintech P-550 tribute was underway.

Given the interest paid to this car throughout the morning, hopefully this will not be the last time we see the Vintech P-550 tribute at Cars&Coffee or in the automotive press…