One of the factors that keeps me returning to Cars & Coffee each week is the diversity of  vehicles and owners that come together every Saturday morning. And with each weeks sunrise, the dawning light uncovers and seems to set the tone for the mornings pending explorations. Some weeks the focus is geared visually towards a particular make of car, in part due to the sheer number of similar makes or models present. Other times, the morning may appear like a scene taken directly from the paddock area at a vintage race track. But this past Saturday struck me as a morning set for celebrating the wonder of light and color.

My first encounter that morning was with this beautiful 1973 Porsche 911T as seen below, wearing the rare, period correct color; “Aubergine” (Porsche paint code # 025).

Ironically, the French word for eggplant (which is exactly what this color resembles) is “Aubergine”. And to give you an idea of just how rare this particular color is, this is only the fourth car I have seen in person painted this color, after experiencing it for the very first time back in 1973.

Ironically, that first sighting occurred on the occasion of my dad taking me with him to shop for his very first Porsche. The dealers demo car at the time, and the one that we got to test drive, could have been the twin to the 1973 911T shown here (also Aubergine with a tan interior). On a side note, our 1973 test drive was a huge success; upon returning to the dealership, my dad placed an order for a 911, and two weeks later took delivery of a brand new silver metallic, 1973 1/2 Porsche 911T with black interior.

My next stop was over at the “Featured Lot”, to check out the cars on display. Situated towards the back of the lot, and parked in proximity to one another were two orange hued supercars. The first was this stunning burnt orange, 2012 Lamborghini Aventador LP-700-4 as seen below. 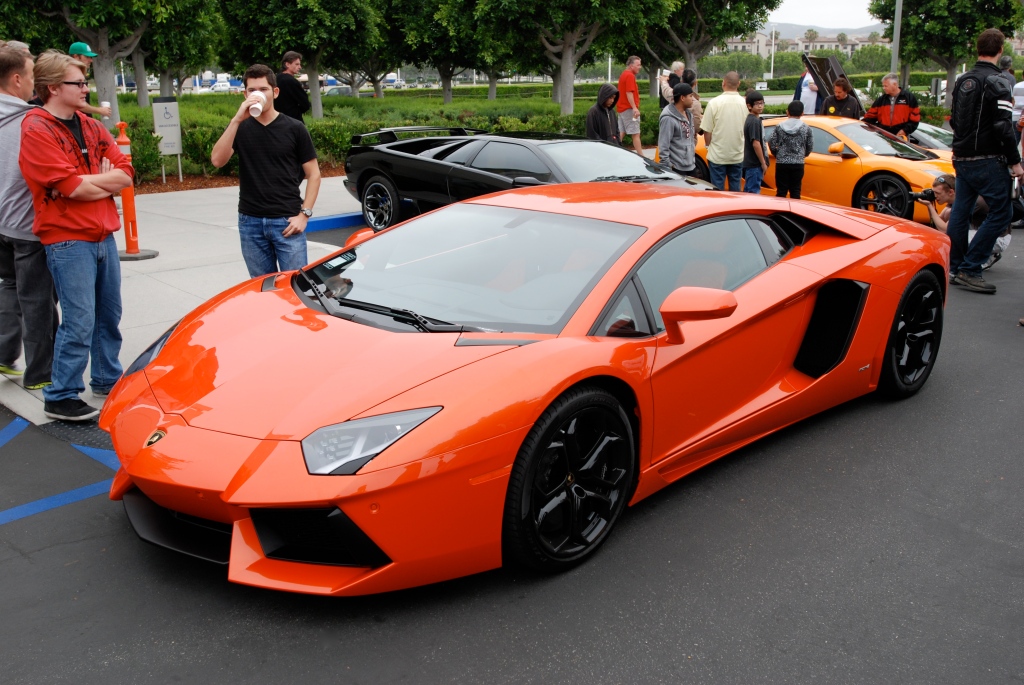 The second car was this 2012 McLaren MP4-12C, painted in the classic “McLaren Orange”… 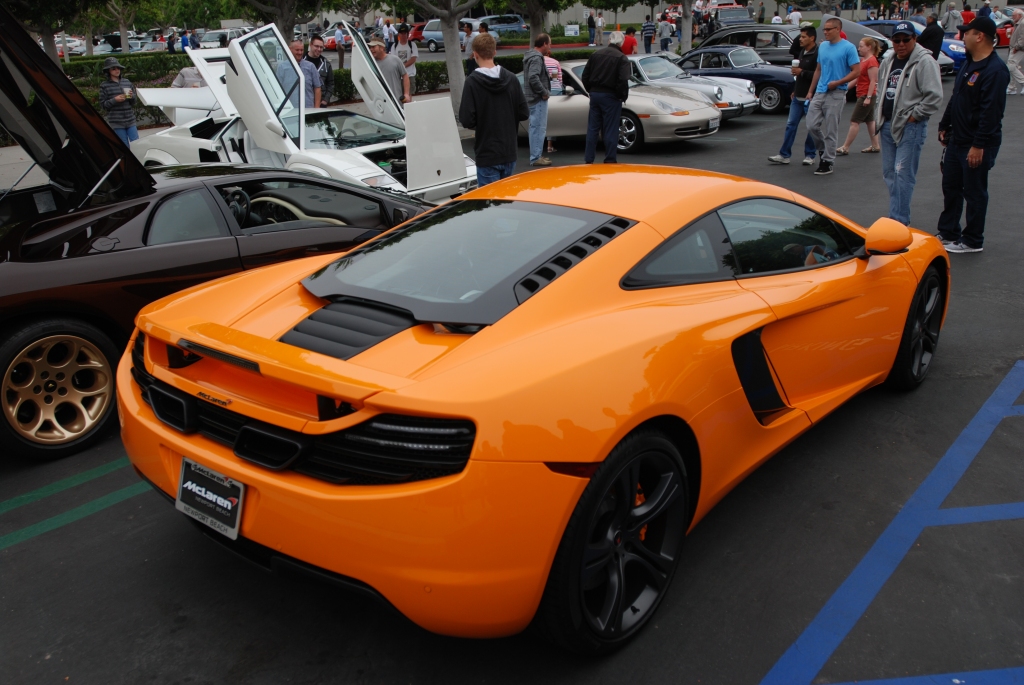 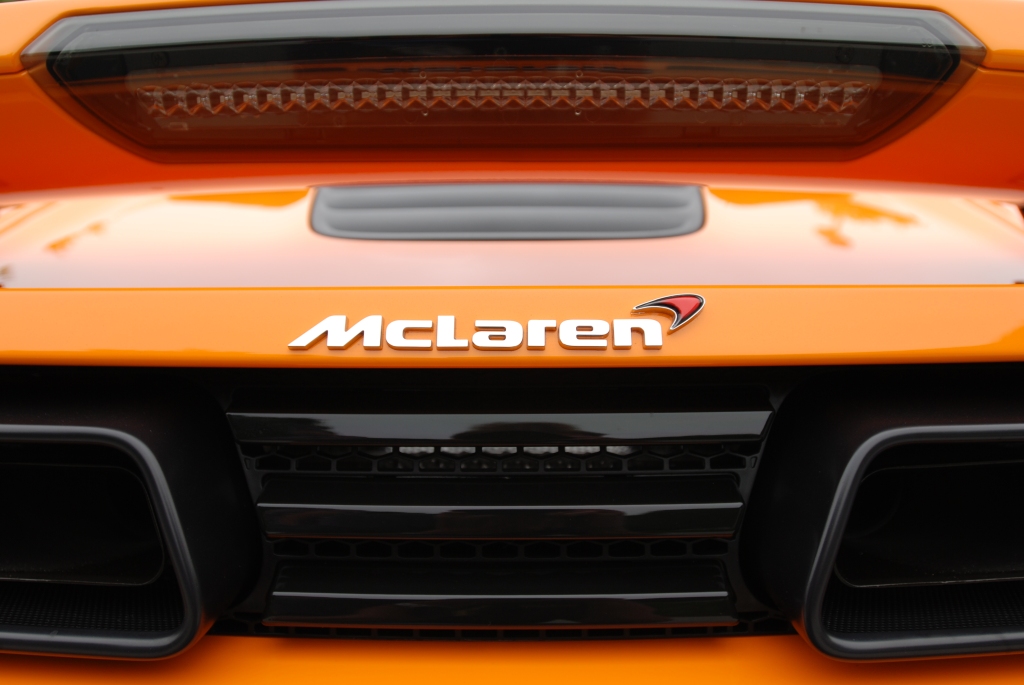 Returning to the main lot, I picked a route that paralleled motorcycle row. And at the end of the row was this trio of custom motorized bicycles on display. All three were equally impressive, however it was the lime green model that really caught my eye, probably because my very first bicycle had been lime green…

Upon closer inspection, it became obvious that the top tube on this custom bike had been repurposed, and now served a dual function; to not only provide structural support to the frame, but also serve as the fuel tank for the motor, securely anchored to the frame below. According to the builder, the bikes can be configured with either a 2 stroke 49 cc or a larger 80 cc motor.

The fit, finish and detailing visible on all three bikes was top-notch, and the display really drew a  crowd. For more information on these three cool bikes and others under construction, check out the builders website – www.dutchmanmotorbikes.com

It was now time for me to check out the cars parked out on the very back rows of the parking lot, and then work my way back towards the front, row by row. Arriving on the  back row, I was rewarded by the sight of two more exotics; one French and one Italian. Representing France was a fire engine red Bugatti Veyron 16.4, as seen below. 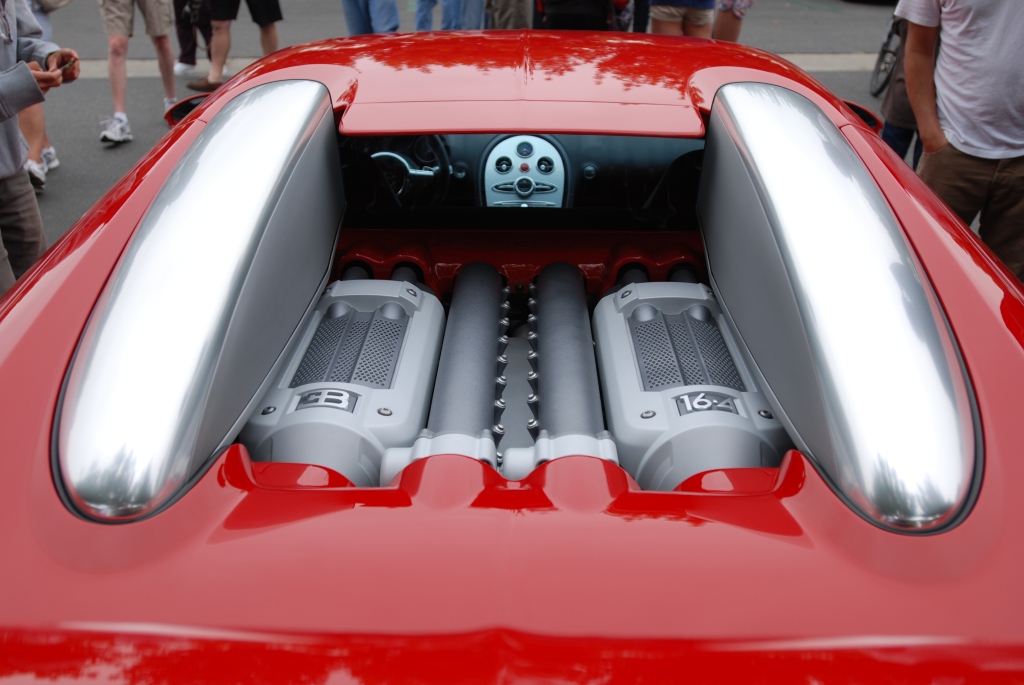 And representing Italy was a second Lamborghini Aventador LP-700-4, this one however dressed in black. 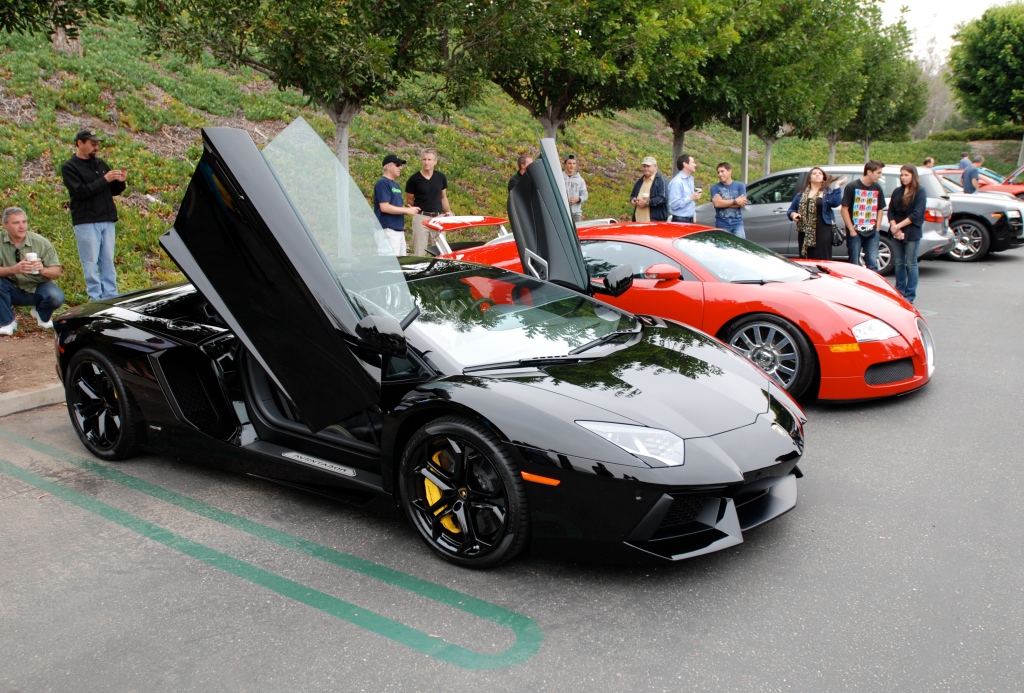 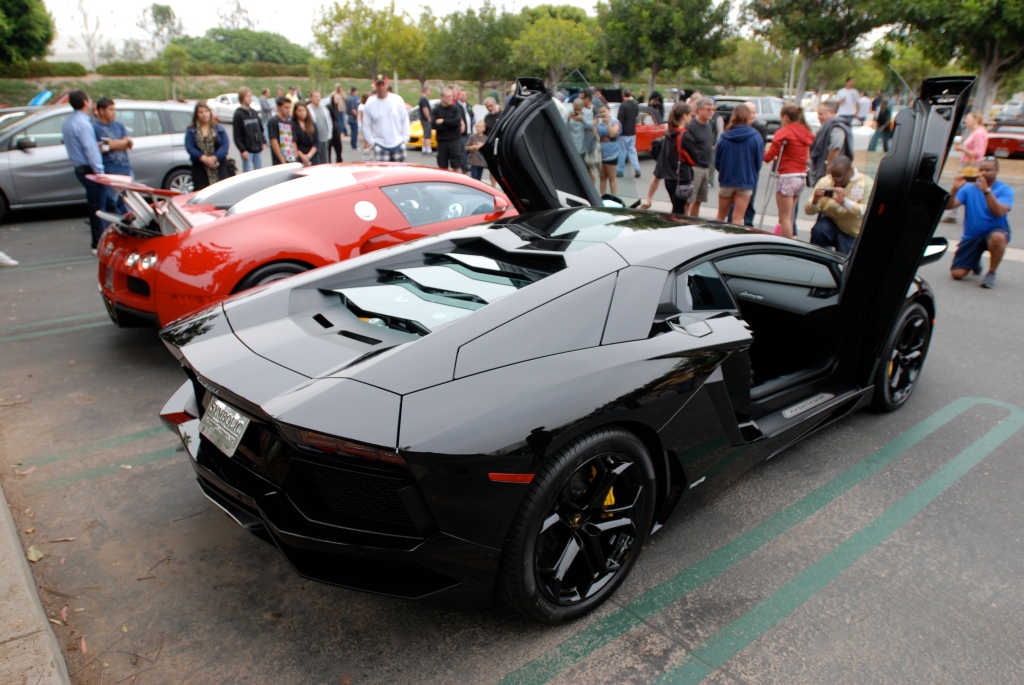 And parked immediately across from the Bugatti and Lamborghini was the beautifully restored, charcoal gray Ferrari Dino. 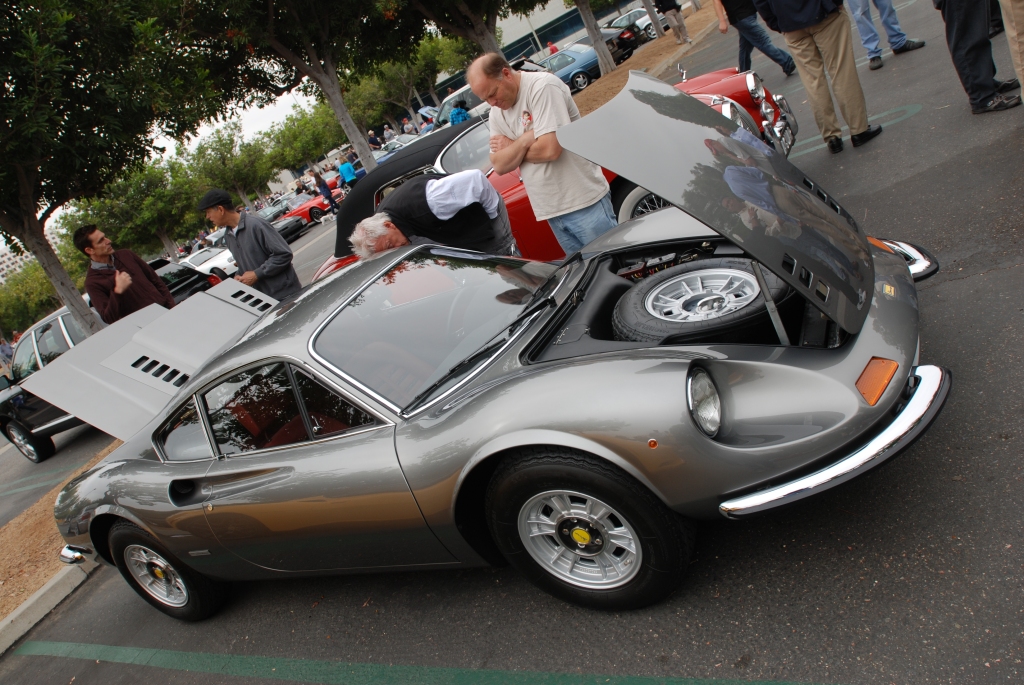 The Dino’s front hood made for the perfect mirror, and it wasn’t until I got home and was reviewing my shots that I realized the full extent of the reflections captured. I had not only recorded the reflections from the Bugatti and Lamborghini parked just across the row, but  had also captured the images of two of the commentators from the Speed Channel (Bob Varsha and Mike Joy) standing nearby, who happened to be in town broadcasting from the Barrett – Jackson / Orange County auction. 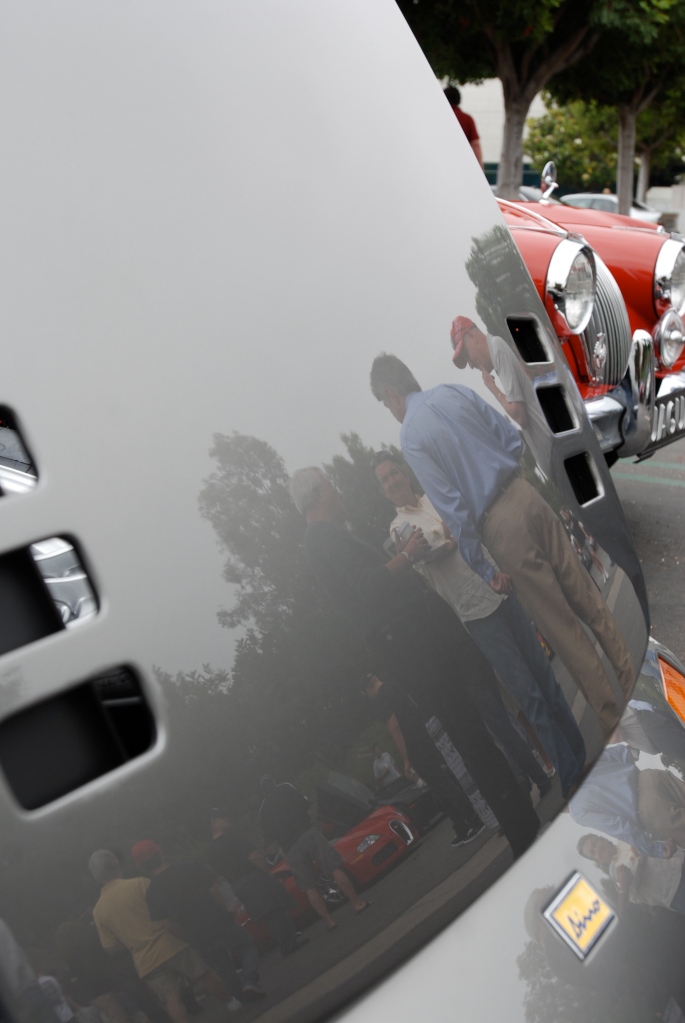 Feeling inspired by these cool reflections, I decided to go in search of other interesting reflections as my quest for the rest of the morning.

Parked just off from the main parking lot, was this beautiful 1962 black on red Chevrolet Corvette roadster as seen below.

And the amazing hidden treasure found beneath the hood… 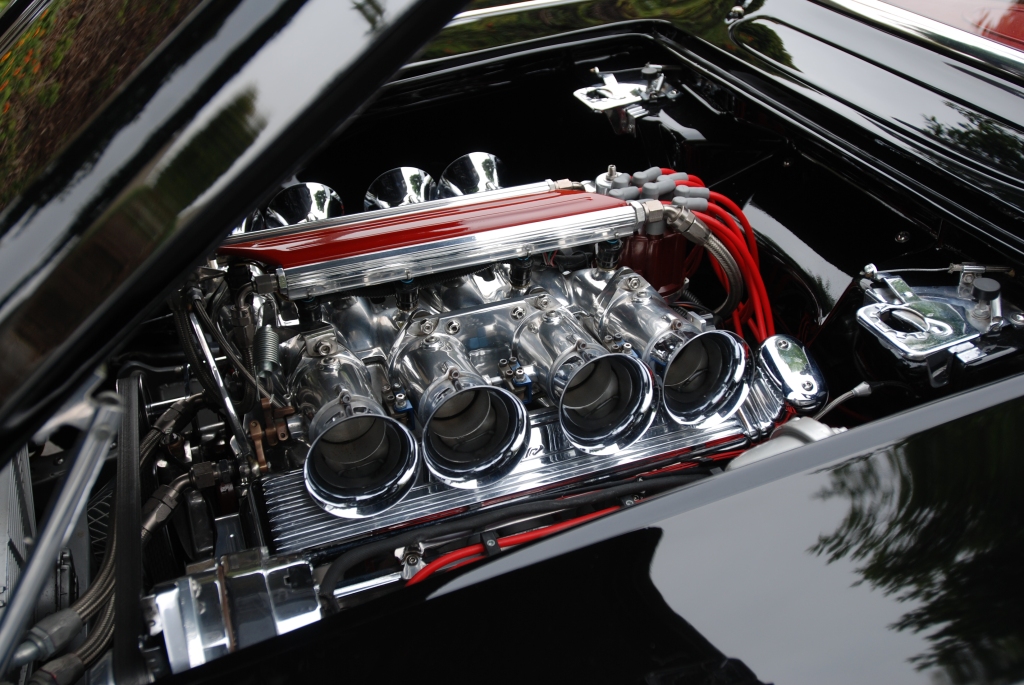 My last stop of the morning would be back at the featured lot, as my final challenge to capture the last few reflections for the morning. And luck was on my side; the two Lamborghini Diablo’s flanking the orange McLaren MP4-12C were still in place, and capturing some amazing reflections.

Now only four days to go until Saturdays sunrise once again reveals its magic, and sets the tone for a whole new set of discoveries…