While out driving this past weekend, I happened to come across a beautifully restored example of a1961 VW, 23 window bus, out for a drive in its glowing sealing wax red / beige gray paint scheme. I recognized this bus from a recent car show and when I returned home, searched through my digital files and found a shot of the same bus that I had just seen earlier that afternoon. 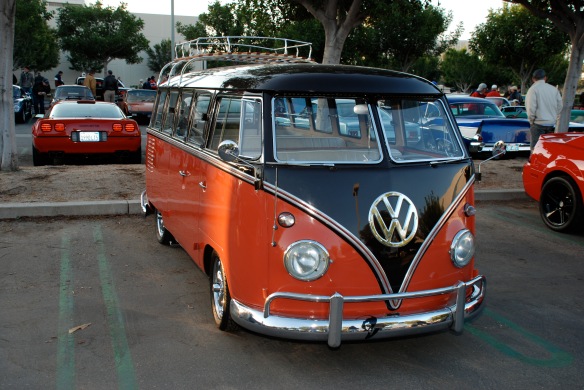 This brief encounter got me to thinking about a time back in the early 1990’s, when I had the opportunity to pick up a 1965 VW type 2 panel van from a friend I worked with for  $500. He had already begun the restoration; the body work had been completed, and the  entire van was now covered in gray primer. The suspension had been rebuilt  and the  bus had been lowered, and sat on stock wheels. There was no motor, however I did not see that as a problem.  Since the van still had its original transmission, I would just need to source a new motor. It was literally a blank canvas awaiting a new owner to complete, and make it his or her own. And with this being my first introduction to the world of  type 2 transporters, I began imagining the possibilities, and for $500  how could I go wrong?

Unfortunately, I had not considered my wife’s reaction to the prospect of a new project, when I shared my ideas with her that evening over dinner. To my surprise her single objection was one of concern for my safety, since I had a long commute each day to work, and she knew that if I bought and restored the bus, that I intended to drive it. She was worried that with so little sheet metal separating the driver from the front of the bus, that in the event of an accident I could be seriously injured. She also threw in the comment of not wanting to become a young widow with two young boys should something happen to me because of my new found project.  So you can imagine the outcome…

Well the years have passed, and with my sons both graduated from college, I have once again begun looking at VW type 2 transporters, and trying to educating myself regarding the differences and features specific by model year. During this process I have learned about the single cabs, dual cabs and  the safari windowed models, in addition to the variations found within the delivery / panel vans family. Part of my education process has included attendance at some of the local car shows, specifically the Bug-in / Treffen events held in Anaheim, California, and the O.C.T.O. Fest events held in Huntington Beach, California. Both events cater to the volkswagen community, while the O.C.T.O club is dedicated to the celebration of the early 1949-1967 transporters.

Armed with my camera and allot of questions, I attended my first event, the Bug-In / Treffen 2 back in 2009. There was an amazing cross section of volkswagens to see, and the number of buses present was mind blowing. I quickly located several early examples staged on the lawn (both 1957 Kombi’s), but it was the Dove Blue example that really caught my eye. After circling the bus several times and taking a couple photos, I struck up a conversation with the owners ( a husband and wife) and began asking them about their bus. I soon learned that the bus had previously been owned by a Ferrari mechanic, and was one of several from his collection. I was then told that fortunately the bus had been very straight and rust free from the beginning, so that during the new owners restoration efforts, there was a minimum of body work required to get it into its present state (which was amazing). The interior was complete, and had come with all of its original parts. I learned that the hardest decision the owners had to make regarding the interior was to select what color leather to use for redoing the interior, and then choose a contrasting color for the piping. They also went ahead and refinished the seat frames and all of the hardware to bring the interior back to like-new. All of their efforts paid off, as the interior was stunning and the perfect compliment to a beautiful exterior.

Underneath , the suspension had been rebuilt and the entire bus had been lowered. For brakes, a set of red Porsche 944 calipers were selected for all four corners. These sat behind four chromed, Porsche 5 spoke fuch alloy wheels. Up front,  a set of the increasingly rare and even harder to find, original Porsche  4 1/2″ X15″ fuch 5 spoke alloy wheels were sourced. Out back, the bus rode on a set of factory 6″X15″ fuch 5 spoke alloys.

But the hidden jewel was revealed when the owner opened up the engine lid. Inside sat a highly modified, beautifully detailed, Porsche fan shrouded street motor producing as the owner described “gobs of horsepower and torque”, enough to transform the bus into what he called their “freeway flyer”. If I recall, their motor was somewhere in the realm of 2300 CC,  a far cry from the small displacement  motor that originally occupied the same space.

When I left the event later that afternoon, I was impressed by the friendliness and enthusiastic nature of the many owners who had patiently answered my questions and who had freely shared the back stories regarding their vehicles.

More recently, in February of this year, I  attended the O.C.T.O. Winterfest event, which was a singular celebration of type 2 transporters. Once again, I encountered an amazing collection of vehicles, and the same friendly environment  and willingness on the part of the owners to share their stories and answer my questions. I came away from this event with an even greater appreciation for the VW community, and have some great photographic resources to draw upon for future project inspiration.

The following photos represent a small sampling of the type 2 transporters that were on display at the Winterfest event back in February. 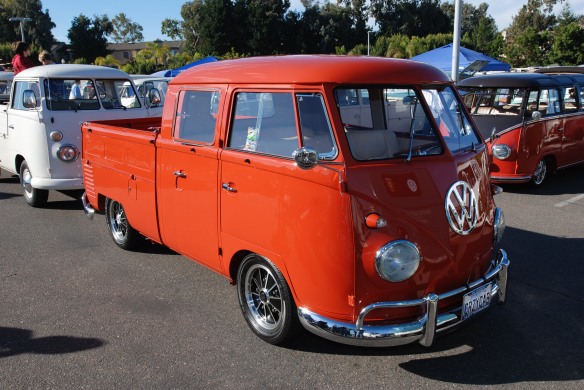 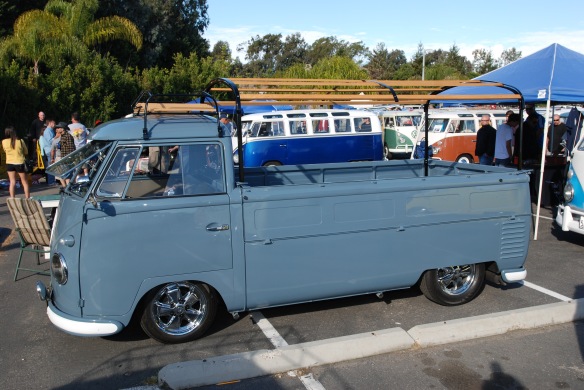